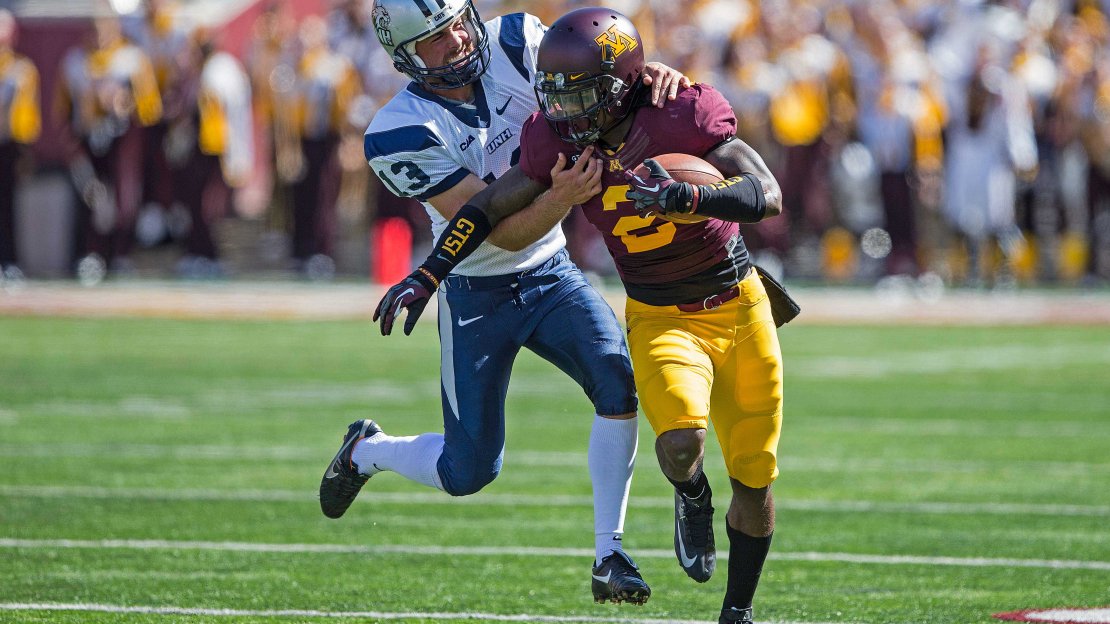 Another Saturday looms. And, I still have questions. For example, can the Iowa offense finally get started? Here are my most pressing queries for each Big Ten team entering Week 3. Read all of my Big Ten coverage here and don't forget to send any of your questions my way for my weekly Big Ten Mailbag.

Illinois
Can the Fighting Illini win if Nathan Scheelhaase isn?t playing quarterback? The attack struggled in a loss at Arizona State with Reilly O?Toole and Miles Osei under center with Scheelhaase out with an ankle injury. O?Toole hit 10-of-14 passes for 54 yards with a touchdown and pick; Osei hit 4-of-10 for 47 yards and two interceptions. The offense tallied just 14 points in Tempe. Scheelhaase may be able to go, but Illinois may opt to rest him another week vs. a foe that Illinois should cruise past.

Indiana
Will the Hoosiers be OK with QB Tre Roberson out for the season with a broken leg? The Hoosiers are off to a 2-0 start and full of optimism. JC transfer Cameron Coffman came off the bench and did well last week, hitting 16-of-22 passes for 159 yards and a touchdown. But he lacks Roberson?s elusiveness and running skills. A visit from Ball State will be a nice audition for Coffman.

Iowa
Can the offense get started? It struggled in the opener, kicking four fields and notching one touchdown. In a 9-6 loss to Iowa State, the Hawkeye offense may have bottomed out with 304 yards and two field goals. So, for the season, Iowa has one touchdown and six field goals. In six trips to the red zone, the Hawkeyes have no touchdowns. The passing game has been especially abysmal. QB James Vandenberg has hit just 54.7 percent of his passes with no touchdowns, two picks and 365 yards. There is a gnawing need for playmakers at receiver. A visit from FCS Northern Iowa suddenly looks scary.

Michigan
Are the Wolverines back on track? The opening 41-14 loss to Alabama was brutal. Michigan followed that with a too-close-for-comfort 31-25 win over Air Force. This is a team many felt would win the Big Ten. But, questions loom. Chief among them is getting more production from the tailbacks. Denard Robinson needs help. A visit from UMass should allow the Wolverines to try a lot of stuff before going to Notre Dame.

Michigan State
Is Michigan State the best team in the Big Ten? I think so. And, I?m not sure many teams are close to the Spartans, aside from Ohio State. Michigan State has the top defense in the Big Ten (225.5 ypg) and its offense may be coming around with the development of the passing game. QB Andrew Maxwell looked good at Central Michigan, and Bennie Fowler is stepping up at wideout. A game vs. Notre Dame is a chance to make a big statement.

Minnesota
Can the defense keep playing well? The unit has looked strong thus far, especially up front vs. the run. The staff has improved the unit's athletic ability with some JC transfers. The Gophers have six sacks after getting only 22 last year. NT Ra'Shede Hageman is coming on. This week's visit from Western Michigan will be a nice test for a program that is improving quickly under Jerry Kill.

[Related: Who wins in Week 3? Cast your votes]

Nebraska
Can the Cornhusker defense improve? Last week, the unit was shredded for 653 yards at UCLA, the second most ever allowed by the program. Nebraska allowed the Bruins to notch 344 of those yards on the ground in a 36-30 loss. Tackling needs to improve. And, where are the playmakers? Where are the stars? Where is the pride? The Huskers need a big win over Arkansas State to regain confidence.

Northwestern
Will the defense pick up where it left off in the Vanderbilt win? The maligned Wildcat unit yielded only 318 yards a week after the Northwestern defense was torched at Syracuse for 596 yards and 41 points. If the defense can play well, the Wildcats could emerge as a sleeper in the Legends. Guys like E Tyler Scott and LB Chi Chi Ariguzo need to keep making plays vs. Boston College.

Ohio State
Can the Buckeyes get QB Braxton Miller some help? He is carrying a huge load-the guy leads the Big Ten in rushing–which makes him susceptible to injury. It will be vital for the attack to get some tailbacks to help with the rushing load. Jordan Hall, who has been out with a foot injury, may be ready to go. But Carlos Hyde hurt a knee vs. UCF and is out. True freshman Bri?onte Dunn is up next with Cal in town.

Penn State
Will the Nittany Lions win a game? Penn State suffered a heart-breaking loss at Virginia to fall to 0-2. Now, Navy visits. The defense gave a great effort, but the offense is an issue. There are few playmakers, making the group less difficult to defend. And the special teams have issues, as witnessed by kicker Sam Ficken going 1-of-5 on field-goal attempts on Saturday. This may be a two- or three-win team.

Purdue
Will the Boilermaker attack be OK without Robert Marve? When projected starter Caleb TerBush was suspended for the opener, Marve took over and excelled. But TerBush started Saturday at Notre Dame. And he struggled, while Marve looked good. TerBush hit 8-of-19 passes for 79 yards with a touchdown and two interceptions; Marve hit 11-of-18 for 119 yards with a score. But now, Marve is out with a knee injury suffered vs. the Irish. Can TerBush make enough happen? And will Rob Henry became a bigger part of the mix?

Wisconsin
Where has the rushing game gone? The Badgers finished with only 207 yards in a brutal 10-7 loss at Oregon State. Wisconsin had just 35 yards rushing on 23 carries. The struggles coast offensive line Mike Markuson his job and earned a G.A-a G.A.!!!-a battle-field promotion. This was an attack that led the Big Ten with 469.9 ypg last year and was third in 2010 with a 445.2 ypg. Now, the Badgers are last in the Big Ten in rushing. There is enough talent up front and in the backfield-hello, Montee Ball–to make this offense go, but it may be tested vs. an underrated Utah State team.