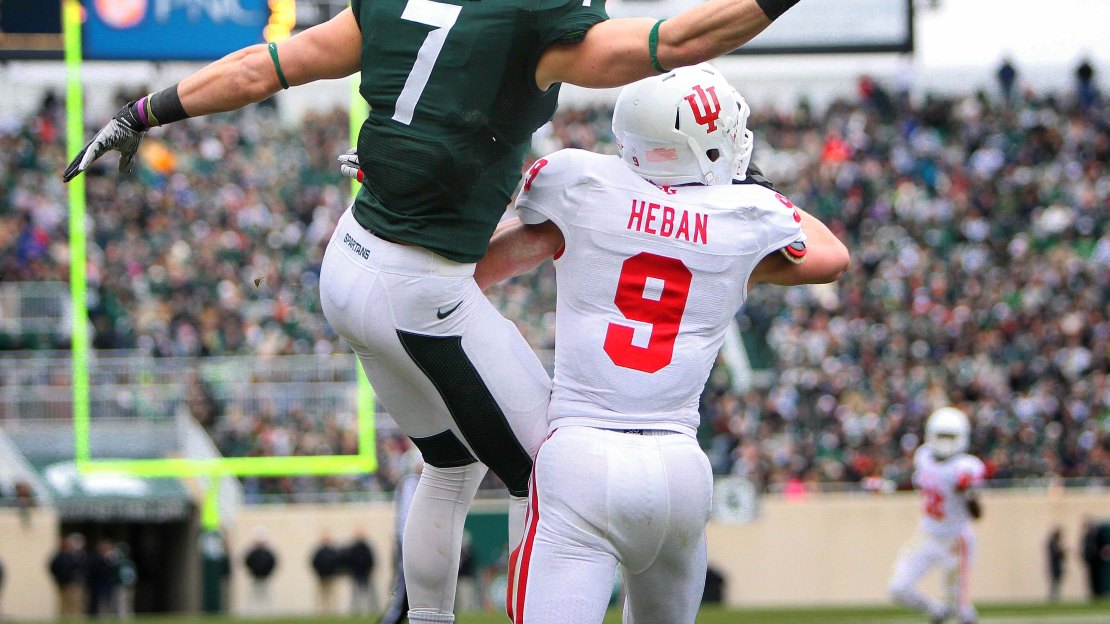 Defense rarely has been a strength at Indiana in the last 20 years. But Indiana defensive back Greg Heban is trying to change that.

The Hoosiers are off to a 2-0 start, brimming with confidence and in search of their first bowl since 2007 and just second postseason game since 1993. The program hasn?t won a bowl since downing Baylor in 1991 in the now-defunct Cooper Bowl.

The defense ranks fifth overall in the conference (325.5 ypg). And Indiana is No. 1 in sacks and tackles for loss. A visit from Ball State looms this Saturday, as Indiana looks to go 3-0 for the third time in the last four seasons.

Heban is a 6-1, 191-pound junior who came to Indiana in 2009 to play baseball. The lefty had a fastball that clocked in the 90-mph range. But he opted to walk-on the football team in 2010 and made an immediate impact. That year, he played in all 12 games at cornerback and on special teams, starting four of the final five contests. Heban tied for the team lead in passes broken up with five and notched 40 tackles.

Heban earned a scholarship in 2011 and hasn?t looked back, becoming a key cog in the Hoosier secondary. Last season, he tied for the squad lead in passes broken up with six and finished third on the team in tackles with 62. This year, Heban has six stops in two games with two passes broken up.

I caught up with Heban, a native of Muncie, Ind., as he came off the practice field this week in preparation to play Ball State, which beat the Hoosiers last season, 27-20.

[Related: Read all of Dienhart's Q&A's]

Q: Have you been pleased with the start by the defense this season?
A: Yes. We have tried to bring more attitude and effort toward the ball this season. We have stressed getting takeaways and turnovers and winning that battle each week. If you win the turnover margin battle, you likely are gonna win the game.

Q: Do you work on generating turnovers and being more aggressive?
A: We work on stripping the ball and getting takeaways once or twice a week in practice. We have a goal of five takeaways a game-and we try to meet that goal each game. Working on the drills helps emphasis that to us.

Q: What is your role on the defense?
A: I switched positions (from corner) to nickel so I feel like I have more run-fit keys. There is a little more pressure on me because I am not involved strictly in the pass game. I feel like me, defensively, I need to step up and be a leader. And the defense needs leaders.

[Related: Who wins Ball State-Indiana game? You tell us!]

Q: How have the five junior-college defensive players been performing?
A: They have been extraordinary. Since Day One, they have brought so much attitude to the defense. (Linebackers) Jacarri Alexander and David Cooper have so much enthusiasm for the game. When they come in, it sparks the rest of the defense and gets us to be just as enthused as them. When you play like that, it becomes a lot more fun and you start to play harder.

Q: What are some of the other defensive goals the unit has each game?
A: We don?t really have a set number of passing yards and rushing yards. We want to eliminate the big plays, be good in the red-zone, our third-down conversion needs to be low. Once we start making those goals, we know we will have a good defense.

Q: Did you envision having this type of career after coming to Bloomington to play baseball?
A: Coming here to play baseball, the last thing on my mind was playing football. I didn?t start to think about it until I started to play intramural football. I did miss it. I talked to (former) Coach (Bill) Lynch and haven?t looked back since.

Q: What is Coach Kevin Wilson like?
A: He is a great coach, a very intelligent coach, probably the smartest coach I ever have been around. He understands the game and is a players? coach. He takes care of us on and off the field. He?s stern, but you need that as a coach. If things aren?t right, you need change. And he?s great at that.

Q: Who is the leader in the secondary?
A: You want the safeties to be the quarterbacks of the defense. We have (Mark) Murphy out there doing a great job working with the linebackers and corners and making the play calls. But as a defense, I think we need more communication-not just from Murphy, but as a whole.

Q: Who is the best cover guy?
A: I am not sure. Brian (Williams) and Kenny (Mullen) are doing a great job. L.B. (Lawrence Barnett) and (Antonio) Marshall are, too, giving them a run for their money. We have really good cover guys right now.

Q: Who is the hardest hitter in the defensive backfield?
A: From the corner spot, it has to be Antonio Marshall. He came from a juco and gives it everything he?s got when he?s going for a tackle. From the safety spot, I think Drew Hardin is one of the hardest hitters on the team.