Best of Week 3: QB Vandenberg on the spot 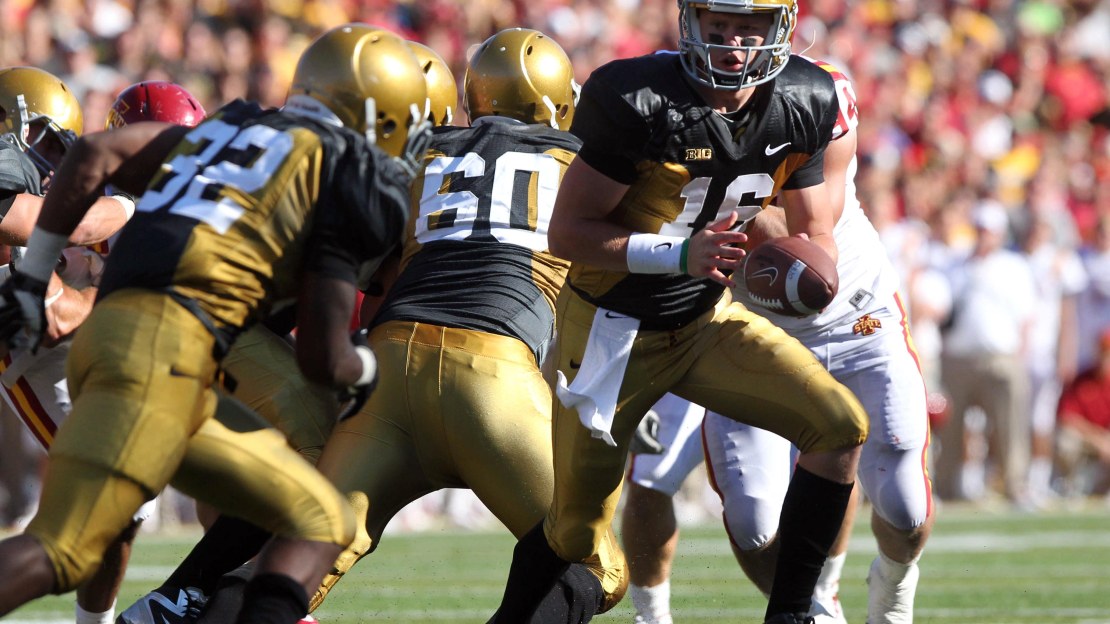 While the Big Ten took its lumps last week in going 6-6, it has a great chance to get healthy this Saturday with a collection of games against largely inferior foes that all will take place in Big Ten venues. Without a doubt, the marquee matchup is Notre Dame at Michigan State. And Cal at Ohio State could be decent. After that, it?s a mixed lot.

Here?s a look at the Best of Week 3 in the Big Ten:

BEST GAME: Notre Dame at Michigan State. The battle for the Megaphone is one of the most underrated rivalries in America. The Spartans are coming off consecutive 11-win seasons. ND whipped Michigan State, 31-13, last year and has won two of the last three meetings. Bottom line: Michigan State has revenge on its mind vs. a Notre Dame squad that hasn?t won in East Lansing since 2006.

BEST MATCHUP: Michigan State RB Le?Veon Bell vs. Notre Dame defensive front seven. Bell is a workhorse back that the Spartans rode to a season-opening triumph over Boise State. He is second in the Big Ten in rushing (tops among running backs) with 62 totes for 280 yards and four touchdowns. Bell can augment his Heisman resume with a big prime-time effort vs. the Fighting Irish, which has their best defense of the Brian Kelly era. Manti Te?o, Louis Nix III, Stephon Tuitt and Kapron Lewis-Moore are key members of a formidable front seven.

PLAYER ON THE SPOT: Iowa QB James Vandenberg. The senior tossed 25 touchdown passes last year; he has ZERO in two games this season. Vandenberg is completing only 54.7 percent of his passes for 365 yards and two picks. Yes, he is hampered by a yawning need for a big-play wideout. And the line has had some issues. Still, Vandenberg needs to find a way to make a play-now. The Hawkeyes have no touchdowns in six red-zone trips. And just one touchdown overall in two games.

KEEP AN EYE ON: The Wisconsin offensive line. The unit is under fire, as assistant Mike Markuson has been fired after two poor efforts by the offense. How bad has it been? The Badgers rank last in the Big Ten in rushing (101.5 ypg). Look, it can?t be a talent issue. The linemen and running backs didn?t suddenly get bad after back-to-back Rose Bowl trips. But, the sub-par effort in 2012 can?t ALL be on Markuson, can it? Of course not. A visit from 2-0 Utah State, which just upset rival Utah, awaits next. The Aggies have only surrendered 152 rushing yards in their two games.

BEST COORDINATOR MATCHUP: Ohio State offensive coordinator Tom Herman vs. Cal defensive coordinator Clancy Pendergast. Herman has the Buckeye spread offense rolling-thank you, Braxton Miller–as Ohio State is No. 1 in the Big Ten in scoring (43.5 ppg) and rushing (275.0 ypg). Pendergast is a veteran coach who will be prepared. He has been a defensive coordinator in the NFL with the Chiefs and Cardinals, boasting an array of pro experience beyond that. Pendergast will be a nice test for the wunderkind Herman and his prolific attack that needs more production from the running back spot.

BEST COACHING MATCHUP: I love the battle between Western Michigan?s Bill Cubit and Minnesota?s Jerry Kill, two underrated coaches. But, I have to go with Michigan State?s Mark Dantonio vs. Notre Dame?s Brian Kelly. Each took over their current job after coaching Cincinnati. But Dantonio is a defensive coach, while Kelly has an offensive background. They have split their two meetings. The last time they met in East Lansing, the Spartans took a wild 34-31 overtime win after Dantonio called a gutsy fake field goal that went for the winning touchdown. He suffered a mild heart attack after the game.

BEST QUARTERBACK MATCHUP: Nebraska?s Taylor Martinez vs. Arkansas State?s Ryan Aplin. Yes, Martinez is coming off an uneven effort in a loss at UCLA. But he is completing 66.2 percent of his attempts for 533 yards with five touchdowns and an interception. Aplin is a 6-1 senior who has hit 59.8 percent of his passes for 606 yards with four touchdowns and a pick in Gus Malzahn?s offense. Aplin is good, which should worry a Cornhusker defense that just allowed 653 yards to UCLA.