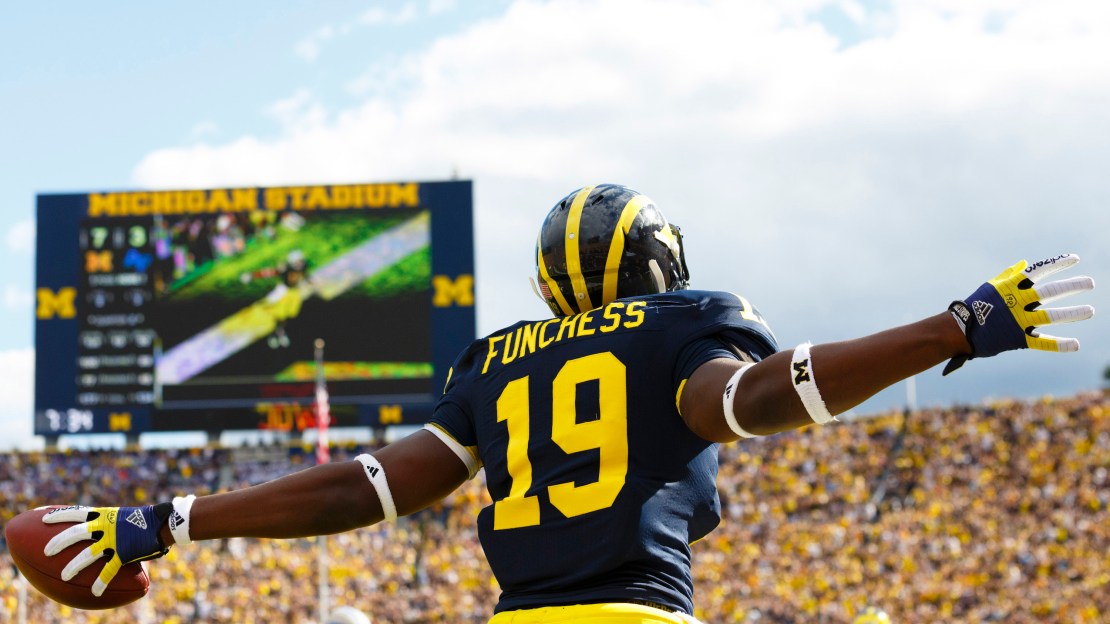 It was a tough Week 2 for the Big Ten. The conference limped to a 6-6 record, with Northwestern's home victory over Vanderbilt being the crown jewel. See my 10 observations-some whimsical, some fact based, some opinionated-from Week 2.

1. Big Ten pride. Look, it took a big hit on Saturday. No amount of sugar can cover up the bitter taste. The conference went 6-6, going 0-3 vs. the Pac-12. Iowa State, Virginia and Notre Dame kicked the Big Ten, too. And wins? They weren?t exactly impressive: UMass, Central Michigan, New Hampshire, Air Force, UCF and Vanderbilt. So, the most quality victory of the weekend came vs. ? Vandy?

2. Speaking of Big Ten pride, where do you think the conference ranks among the other six BCS leagues after two weeks of action? It has to be behind the SEC, Pac-12 and Big 12. Is the Big Ten better than the ACC? Hmmm. I think the Big Ten rates ahead of the Big East, so it has that going for it.

3. Purple Power. Yes, the Wildcats are 2-0! And both wins have come vs. BCS conference foes Syracuse and Vanderbilt. Hey, I know neither is a heavyweight, but find me another Big Ten club whose first two opponents have been on par with Northwestern?s two? You can?t.

5. The Leaders Division. With Ohio State and Penn State ineligible to play in the Big Ten championship game because of probation-and with Wisconsin looking suddenly vulnerable after a dubious 1-1 start that has included an unimpressive win over FCS Northern Iowa and a horrendous loss at Oregon State-the Leaders looks to be up for grabs. Are you listening, Purdue and Illinois?

6. Golden Gophers. What in the name of Bernie Bierman is going here? Minnesota is 2-0. And it could be 4-0 with upcoming games vs. Western Michigan and Syracuse in the comfy confines of TCF Bank Stadium. The Gophers then open Big Ten play at Iowa on Sept. 29. Are you thinking what I?m thinking? You know, that Minnesota could be the feel-good story of 2012 in the Big Ten?

7. Two-quarterback systems. I?m not a fan of them. But two weeks into the season, we see Purdue and Northwestern each using two signal-callers. For the Wildcats, it has worked out well, with Kain Colter starting both games as a dual-threat option and Trevor Siemian coming on to pump air into the pass game for the 2-0 Wildcats. The situation at Purdue seems less ideal. Projected starter Caleb TerBush was suspended for the opener. Robert Marve took over and played well in an opening win over FCS Eastern Kentucky. But TerBush started Saturday at Notre Dame. And he didn?t fare as well as Marve. I wonder: If Marve had started and played all game, would the Boilermakers-who had only 288 yards–have won?

9. We have played only two weeks, but it?s already apparent who is Illinois? MVP: It?s quarterback Nathan Scheelhaase. With him out of the Arizona State game with an ankle injury, the Fighting Illini offense struggled with just 332 yards of offense, three picks and 101 yards passing. Bottom line: Illinois had little chance to win without Scheelhaase. Get well soon.

10. Penn State fight. I wasn?t sure how the Nittany Lions would respond to that gut-wrenching season-opening loss at home to Ohio. But, Penn State responded with a great effort at Virginia in a game it should have won-save for four missed field goals and a missed PAT. The defense played great. But, I wonder: How many games will the 0-2 Nittany Lions end up winning? There still may be five or six winnable games on the schedule.