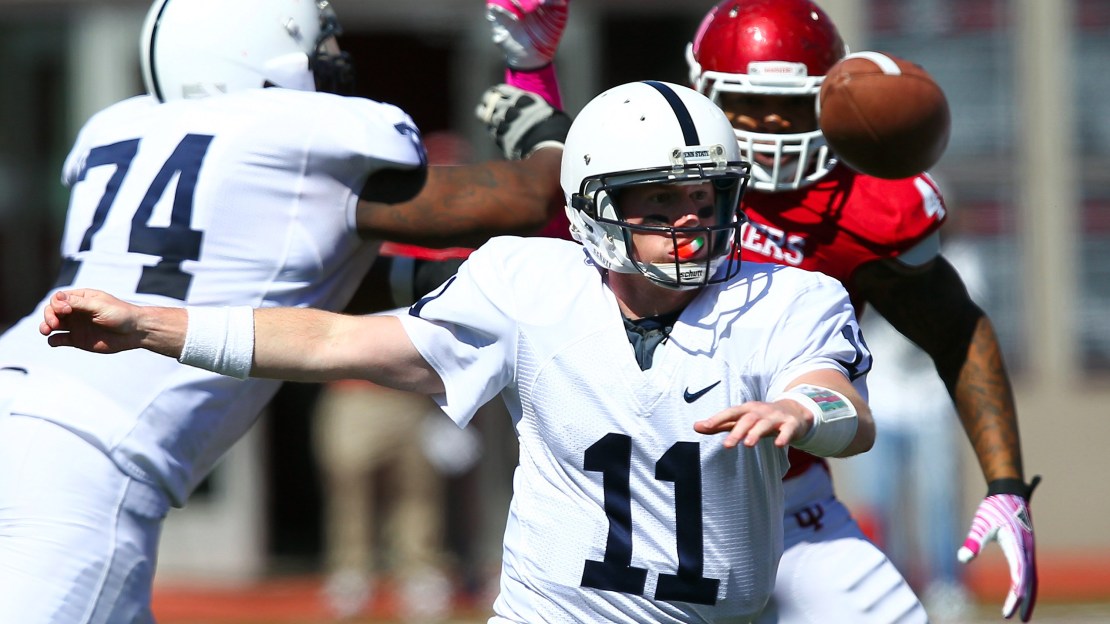 Virginia's Michael Rocco hit Jake McGee on a 6-yard touchdown pass with 1:28 to play Saturday, and Sam Ficken's fourth missed field goal of the game – from 42 yards at the gun – preserved the Cavaliers' 17-16 victory over Penn State. The loss in new coach Bill O'Brien's first road game hurt the Nittany Lions just as much, if not moreso, than their defeat last weekend at home against Ohio.

Penn State (0-2) forced four turnovers in Virginia territory, continually taking it away to give its offense another opportunity, but then couldn't close the deal.

Virginia's winning drive covered 86 yards in 12 plays, the biggest blow a 44-yard pass from Rocco to Jake McGee on third-and-16 from the Cavaliers' 22 yard-line. Seven plays later, on third-and-goal from the 6, Rocco found McGee open again in the end zone, and Drew Jarrett's extra point was the difference.

FINAL: Virginia took the lead in the fourth quarter and hung on for a 17-16 victory over Penn State on Saturday at David A. Harrison III Field at Scott Stadium. With 1:28 to go, Michael Rocco tossed a six-yard touchdown to Jake McGee to give the Cavaliers a 17-16 lead. Rocco and McGee had a passing connection going, as McGee racked up 99 yards and one touchdown on four catches en route to a win for Virginia.

The Cavaliers' offense had a sloppy outing, as it turned the ball over four times. Virginia's offense gained 294 total yards though, and was able to score enough for the win.

The Cavaliers' explosive offense used big plays to take down the Nittany Lions. Virginia had five plays of 20 yards or more on its way to victory. With 5:00 to go in the fourth quarter, Rocco found McGee open for a 44-yard pass, the Cavaliers' biggest gain of the game. The big play set up a 16-play drive that gave Virginia a 16-16 lead after the Cavaliers scored on Rocco's pass.

Rocco threw for 257 yards while completing 21 of 33 passes for Virginia. Rocco finished the game with two touchdowns and one interception. Rocco had a trusted receiver in Darius Jennings. He hauled in five catches for 68 yards.

Penn State's Matt McGloin went 19 of 35 through the air for a total of 197 yards. McGloin tossed two touchdowns and no interceptions. Allen Robinson was the player McGloin targeted most often. He caught 10 passes for 89 yards and one touchdown.