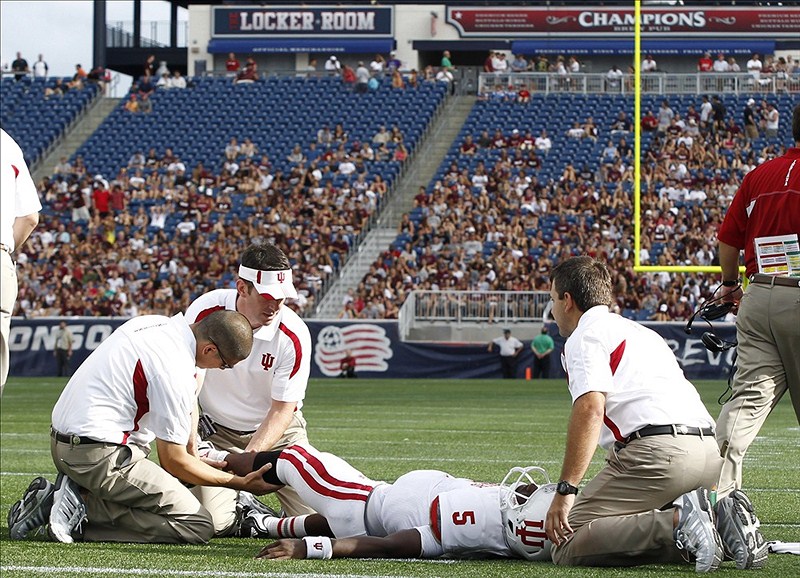 Indiana team officials told ESPN that QB Tre Roberson broke his leg on a running play in the second quarter of Saturday's game against Massachusetts. Roberson had scored on runs of 50 and 39 yards before leaving the game, and Indiana spoiled Massachusetts' first home game as a Football Bowl Subdivision member with a 45-6 win on Saturday.

Playing at the stadium of the three-time Super Bowl champion New England Patriots, the Minutemen were no match for one of the Big Ten's weaker teams. The Hoosiers led 21-6 midway through the first quarter and already had totaled 223 yards.

FINAL: The Hoosiers' explosive offense used big plays to take down the Minutemen. Indiana had six plays of 20 yards or more on its way to victory. With 12:23 to go in the first quarter, Roberson scrambled for a 50-yard touchdown run, the Hoosiers' longest play on the day. The score gave Indiana a 7-0 lead.

Massachusetts' Mike Wegzyn passed for 151 yards, completing 18 of 26 throws. He threw no interceptions. Wegzyn was also a threat on the ground, as he rushed for 32 yards and one touchdown on seven attempts. Wegzyn had a trusted receiver in Marken Michel. He hauled in five catches for 68 yards.

The Minutemen finished with 264 total yards, including 186 yards passing while completing 21 of 34 attempts. Massachusetts rushed 36 times for just 78 yards.

In relief of Roberson, Cameron Coffman threw for 163 yards while completing 16 of 22 passes for the Hoosiers. Coffman tossed one touchdown and no interceptions. Cody Latimer was the player Coffman targeted most often. He hauled in five catches for 68 yards.