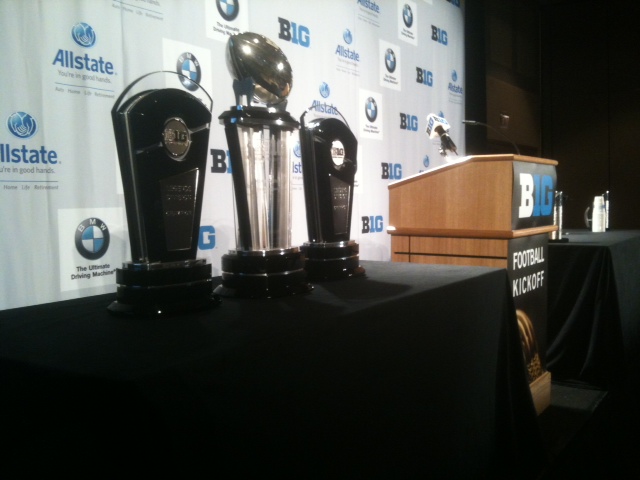 It turns out Ohio State and Penn State do have something to play for this season, despite being on NCAA probation and ineligible to win the Big Ten or go to a bowl game. The Big Ten has said if either team finishes first in the Leaders Division, it will be awarded with the division trophy and be deemed ?Leaders champion.?

The reaction? Urban Meyer isn?t excited by the prospect. And Penn State coach Bill O?Brien seems appreciative. Me? I?m not a fan of the move. I know other Big Ten teams in other sports have been on NCAA probation in the past and still been eligible to win Big Ten titles. So, in some respects, this isn?t a new precedent. The Big Ten office compiled information on league teams that were sanctioned by NCAA but still able to compete for and win Big Ten championships, and in some cases win conference tournaments.

Here's what they sent me:

But what is different about this recent ruling than any other is that while Ohio State and Penn State CAN?T advance to the Big Ten title game and thus win the conference banner, they CAN win their division.

The Big Ten?s logic in this ruling makes sense on many levels. But, I still wonder: Why be able to do one without the other? Either make Ohio State and Penn State eligible to win the Big Ten title-or don?t allow them to be eligible to win anything within the league. What does everyone think? Tell me in the comments below.

Look back: Andrew Kehe of the Harrisburg Patriot-News has a unique perspective on Penn State?s loss to Ohio. He says not to blame NCAA sanctions. Rather, he says Ohio must be given credit for just being good. And the transfer of nine Nittany Lion players also played a big role in the depressing season-opening loss, as well as the emotional stress of the highly-energized environment last Saturday.

It all took a toll. The sanctions? Their full impact will be felt in coming years.

Home improvements: How does star Michigan offensive tackle Taylor Lewan feel about his unit?s effort in that 41-14 loss to Alabama? He says it was ?embarrassing.?

Lewan committed three penalties, and his front failed to get a consistent push in the run game. But know this: The Wolverines don?t figure to see another line as talented as the Alabama front they just faced. So, Lewan and company have that coming for them-which is nice.

Kinnick's edge: Iowa may have a not-so-secret edge in its battle with Iowa State for the Cy-Hawk Trophy this weekend. It?s Kinnick Stadium.

The last time the Cyclones won in Kinnick was the 2002 season. If you?re counting in Ames-and I know you are-that?s four losses in a row in Iowa City. And the defeats have been by an average of 14.3 points.

Mr. Fix-it: You know how coaches always say that you play like you practice? Well, it?s true. Ask Wisconsin defensive end David Gilbert. He and several defensive teammates have said poor practices may have contributed to some breakdowns in the second half of that lethargic 26-21 win over FCS Northern Iowa.

How bad was the ending to that season opener? The Badgers held Northern Iowa to 47 yards and no points in the first half, then permitted 259 yards in the second half and three touchdowns in the final 15:52. Let?s call this a wake-up call.

Turning the corner: The great Tom Shatel of the Omaha World-Herald looks at the remarkable transformation of quarterback Taylor Martinez.

No Big Ten player had a more impressive debut to the season than Martinez, who threw for five touchdowns in a 49-20 win over Southern Miss. While his throwing was impressive, I still think Martinez needs to use his legs. It?s that speed and athletic ability that make him special. And the Cornhuskers will need that to win their tougher Big Ten games. For the record, Martinez ran just six times for 10 yards in the opener. He ran for over 1,000 yards each of the past two seasons.

Handy men: Does Illinois have a true No. 1 receiver like past greats David Williams, Brandon Lloyd and A.J. Jenkins? The jury remains out, says the great Loren Tate of the Champaign News-Gazette.

Darius Millines, Spencer Harris and Ryan Lankford are the top options for now. The development of the wideouts and passing game are even more vital when you consider the work-in-progress line and unproven running backs need the passing game threat to create space for the rushing game.

After an innocuous debut against Boise State, it goes without saying that the Michigan State receivers need to step it up.

Tony Lippett had a particularly tough day in the opener. Yes, his three catches against Boise State led the team. But he also turned over the ball twice. Looking for a spark, Tennessee transfer DeAnthony Arnett and true freshman Aaron Burbridge may play bigger roles this week. Arnett has struggled to pick up the offense, while Burbridge has dealt with injury. But, their time is now.

MSU WR coach Terrence Samuel on Tony Lippett: "He understands the importance of when we get an opportunity to make a play. …"

My take: Yes, Lippett had a tough opener. But Michigan State has to keep his confidence up. The Spartans need his talent and skill level to inject big-play ability on the perimeter of the offense.

Even if Scheelhaase was able to play Saturday, how long could his ankle hold up? Better have all 3 QBs ready to roll for Ariz. St. #dechr

My take: I agree with Tupper on this. I expect Nathan Scheelhaase to start on Saturday night at Arizona State. But I?m just not sure how good he will look with an ankle injury. The Illini may need to use multiple quarterbacks.

Meyer said there is plan to keep Braxton from cramping again, but said w/ smile, "I hope he cramps up again. That means he's got some yards"

My take: This is all well and good, but Ohio State has to make sure Braxton Miller doesn?t do too much and carry too big of a role. The Buckeyes can?t afford to have him get injured.

Charles Davis is the Fox analyst for #Huskers-Bruins. UCLA kids "will play like there's no tomorrow" for new coach Mora, Davis said.

My take: Charles Davis of FOX is correct. UCLA has a lot of pride. Expect the Bruins to play hard. They are tired of playing second fiddle to USC in their home town. A win over Nebraska would be a big confidence boost and credibility-builder for UCLA. This is a dangerous game for the Cornhuskers.