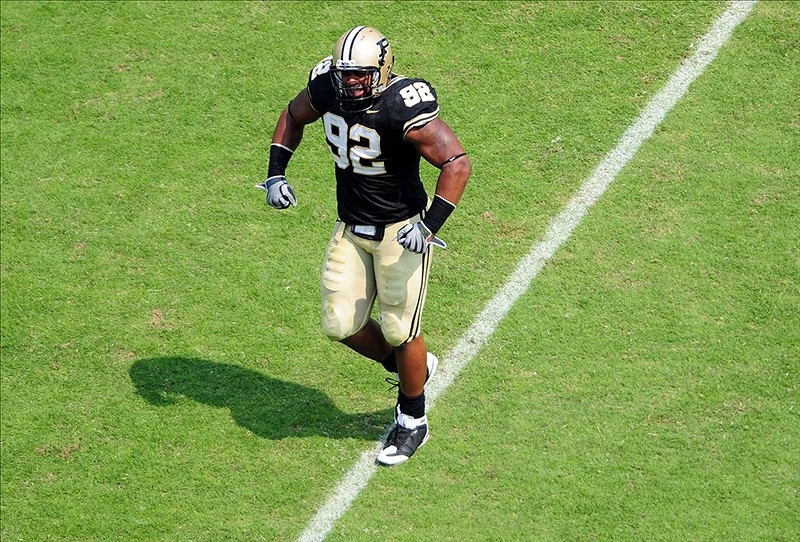 Purdue defensive tackle Kawann Short thought about turning pro after last season, but he didn?t like what he was hearing from the NFL advisory board. So, he?s back for a senior season. And the affable Short just may be the top defensive tackle in the Big Ten.

He got off to strong start in the opener vs. Eastern Kentucky, registering a tackle for loss and sack in the Boilermakers? 48-6 victory. Even better, Short blocked a field-goal attempt and extra-point attempt.

The 6-3, 315-pound East Chicago, Ind., native is a strong and explosive force on the interior of a Boilermaker defensive line that is among the best in the Big Ten. Short is joined inside by tackles Bruce Gaston and Brandon Taylor, along with ends Ryan Russell, Ryan Isaac and Jalani Phillips on the flanks.

Last season, Short was a first-team All-Big Ten choice by the media. He finished with a career-high 54 tackles in 2011 and paced the team with 17 tackles for loss. Short added 6.5 sacks.

I caught up with Short as he prepared to play at Notre Dame this Saturday. This is a big game for Purdue, as it looks to win in South Bend for just the second time since 1974.

Q: What is your knack for blocking kicks?
A: I don?t really have a special knack. It?s just me and the guy next to me got a push together. And that opened things for me to be able to get my arm up and block the kicks. I haven?t been taught any special techniques. I just have the guys up front all getting a push. It?s about effort and determination.

[Related: Where does Short land on our Big Ten Player Rankings?]

Q: Talk about your linemates. This looks like it could be a really good front, right?
A: Yes, we could be good. Ryan Russell, he is a totally different player from this year compared to last year. He has more energy and a better understanding of the game. He is doing what he has to do and is starting to make some plays. He is maturing.

Ryan Isaac No. 61, he?s a powerful guy coming off surgery. It doesn?t seem like it. He?s very confident in himself. And he is confident in his knee as far as not second-guessing it. He?s doing his job and taking care of business.
Bruce Gaston used the offseason to turn around his work ethic. He?s doing what he?s supposed to do and is being in the right gaps. Those three guys really helped each other out this summer, focusing on what type of defensive line we want to have this year. And they all worked hard.

Jalani Phillips and Greg Latta are young guys who are still coming along. They have been a big help to the team and the front. They are doing their jobs. Great teammates with potential.

We dedicated ourselves this summer and competed well in camp. We have each other?s back and want to be a dominant front.

Q: You played high school basketball with former Purdue star guard E?Twaun Moore. Do you stay in touch?
A: Oh, yes. We talk once a week. He was going to come to the last game but had to take care of some business with his agent. We are good friends who go way back. I am happy for him, getting to the NBA.

Q: Can you take him in a game of one-on-one?
A: I went to his camp and worked it this summer. We were playing some five-on-five, and I stripped the ball from him at one point and laid it up. We have a competition. I wouldn?t say I can beat him. But I can get the best out of him.

Q: Have there been any offensive linemen you have competed with that have stood out?
A: No one individual, but some team?s line have stood out. Wisconsin, Michigan, those two the most. Notre Dame, too. Those fronts always compete. Big, strong, physical lines. I like battling those guys. They usually bring out the best in me. There are a lot of good linemen I have seen.

Q: Any Purdue offensive linemen who give you the most problems in practices?
A: Rick Schmeig at center and Peters Drey at guard. I respect those guys. Just working out with those guys in the summer, seeing their dedication and how hard they work. I go against those guys every day in practice. And they make it tough on me, really pushing me to get better. I appreciate that. One day, they get me. And I get them on another. We always are battling for bragging rights. It?s all about improving.

[BWW Sweepstakes: Enter for a chance to win a trip to the 2012 Big Ten Football Championship.]

Q: What do you want to get better at this year?
A: One is being more consistent. That sticks in my head: consistency. Information that came back from the NFL was that was the main thing, be consistent from play to play with my effort. I want to be the next Ryan Kerrigan with that high motor always running. I need to do that on every down, I want to know I did a good job on every down. I talk to Mike Neal, Cliff Avril and Ryan. We talk about lots of thing, life in general, not just football. I respect those guys a lot. They push me to get better and to be my best.