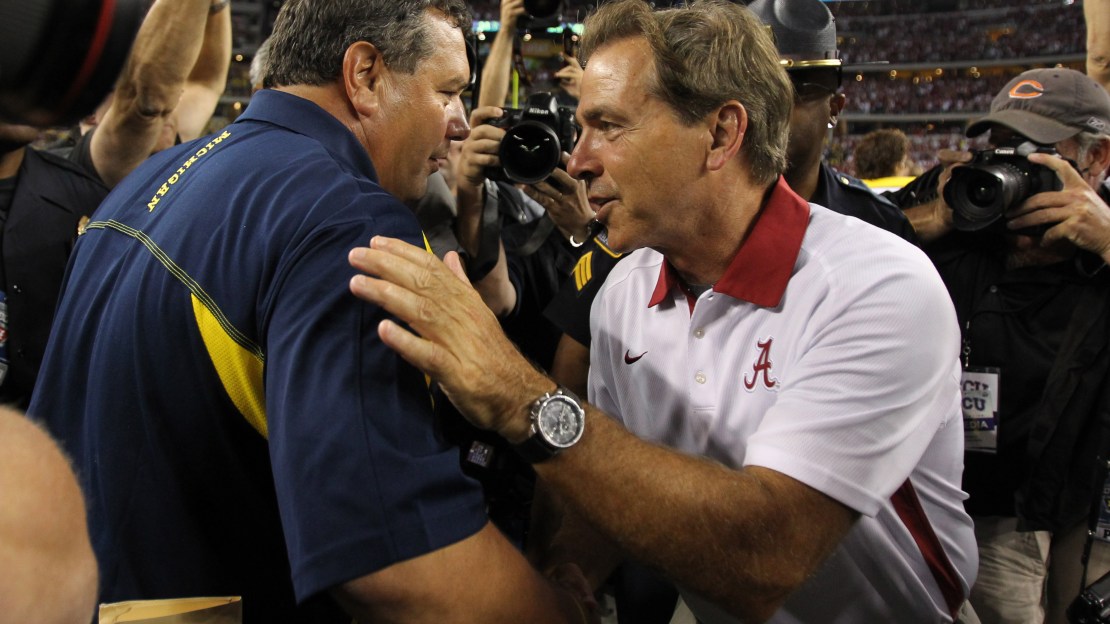 It was one of those nights for Michigan in its big showdown with Alabama in Cowboys Stadium in Arlington, Texas, as this game was over before the massive 2,100-inch video board had even warmed up.

The college football world had waited months-at times this summer, it felt like years–for this game to officially take the lid off the 2012 season.

Not only was this going to be the most anticipated game of the first weekend of the season. But it also was going to be a chance for the Big Ten to earn some street cred vs. the nation?s biggest, baddest and best conference-the SEC, winners of the last six national titles.

But, instead of showing America that it was ready to stand toe-to-toe with the nation?s elite, Michigan?s showing in a 41-14 defeat to the Crimson Tide only further cemented the images of both the SEC (lynchpin) and Big Ten (wannabe).

Not even suspended Wolverine running back Fitz Toussaint would have made a difference tonight in Cowboys Stadium in what was the worst season-opening loss in school annals. Michigan would have had to summon a collection of its past All-Americans to stay on the field with this Alabama team on this night.

Who are we trying to kid? The Wolverines had no business being on the same field as this Crimson Tide team, which has won two out of the last three national championships (2009 and 2011) and just happens to be the hottest team in America.

Alabama out gained Michigan, 430 yards to 268, racing to a 31-7 halftime lead. The Crimson Tide imposed their will on the Wolverines, rushing for 231 yards and limiting Michigan to 68 on the ground while forcing the Wolverines into three turnovers.

The Wolverines? They haven?t even won the Big Ten since-Are you ready for this?-2004. This is a Michigan program that remains a work-in-progress.

But that wasn?t a dominating Michigan team. This wasn?t a team that truly crushed any foe. Heck, Michigan isn?t even the best team in its own state. Wolverine fans may not like hearing that, but it?s true.

Now, I think Michigan is pointed on an upward track. I trust what Hoke is doing and think he can get the program back to where it was under Lloyd Carr, who won five Big Ten crowns and a share of the 1997 national championship.

But, it will take time. Remember: Hoke inherited a hot mess from the disastrous Rich Rodriguez tenure that seems like a three-year bad dream after it produced a 15-22 overall mark and 6-18 record in the Big Ten. There were dubious home losses to the likes of Northwestern, Illinois, Purdue and Toledo. TOLEDO!!!

Worst of all: Rodriguez got this proud program on NCAA probation for the first time ever. And that, ladies and gentlemen, hurt more than any losses to Ohio State. And, there were three of those under Rich Rod.

But, Hoke began turning the page on that ugly recent history last season. No doubt, he has done a lot of good in a short period of time. However, tonight was a painful reminder that the process will take more time. All good things take time.

Saban went 7-6 his first season at Alabama in 2007, needing a 30-24 win over Colorado in the Independence bowl to finish over .500. Earlier in that season, there was an utterly humiliating 21-14 home loss to Louisiana-Monroe. And there also was a numbing 17-12 defeat at Mississippi State.

Again, my point: Saban and Bama had to do some suffering and building before enjoying the fruits of their labor. Consider this loss tonight to be part of the suffering-part of the building process-for Hoke and Michigan.

If it?s any consolation to Michigan fans, they surely remember what Saban and Bama did to Michigan State in the Capital One Bowl after the 2010 season, when the Tide whipped the Spartans, 49-7. Honestly, it wasn?t really that close, with Bama totaling 546 yards and MSU 171-with minus-48 on the ground. Look where Michigan State is now. Michigan will get there.

Despite this loss, Michigan still can win the Legends Division, it still can win the Big Ten. The Wolverines have Air Force and UMass next; then comes a game at Notre Dame. Michigan needs to move past tonight and focus on tomorrow.

Better days are ahead. Trust me.