Dienhart: 5 things I learned in Week 1 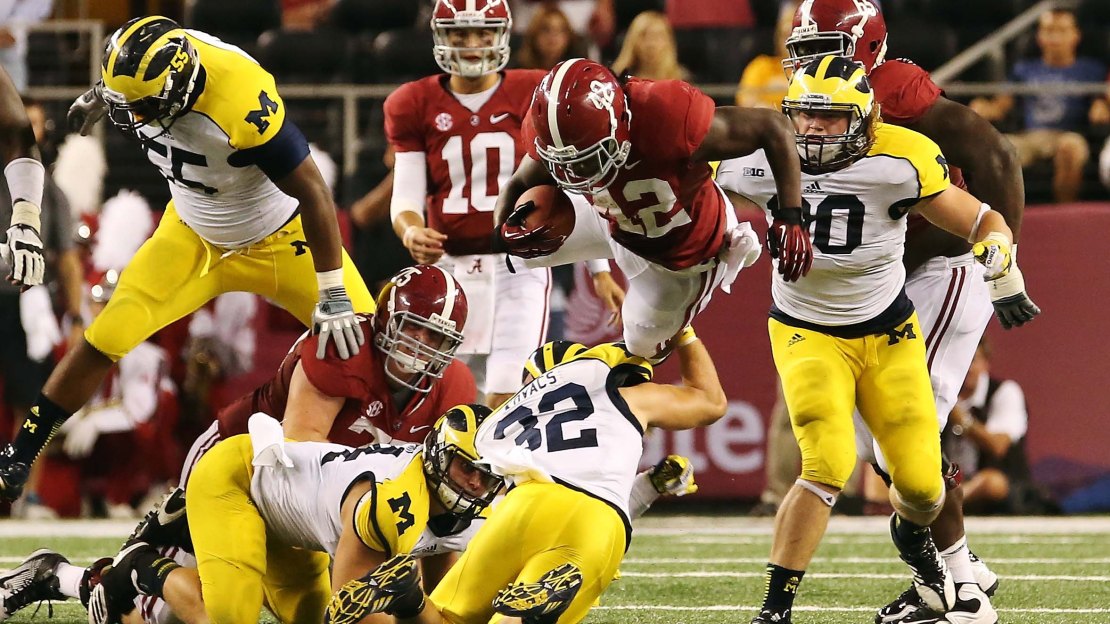 Week 1 is in the books. The Big Ten compiled a 10-2 record on the opening weekend, with Michigan and Penn State suffering the lone hiccups. But what did I learn from the first week of action? As I will do every Sunday morning during the college football season, I share the five things I learned from that week's games. I learned a lot from Week 1, none bigger than Michigan and Brady Hoke have some work to do. See all five things in this post.

1. Michigan isn?t ready for prime time. Yes, Brady Hoke has done many great things in a short period of time in Ann Arbor. And that 11-2 record capped with a Sugar Bowl triumph over Virginia Tech last season was nothing short of stunning. But the Wolverines had never encountered anything like this Alabama program, which is the hottest and best in the nation. No shame in losing to the Crimson Tide, the defending national champion who have two titles in the last three years. The 41-14 loss just shows Hoke and the No. 8 Wolverines how far they still have to go to be a legit national title contender. Still, Michigan can win the Legends, and the Big Ten. So, big goals remain within reach.

2. No disrespect to Nebraska?s Rex Burkhead, Michigan?s Fitz Toussaint or Wisconsin?s Montee Ball: But Le?Veon Bell may be the top running back in the Big Ten. The Michigan State bull ran 44 times for a career-high 210 yards in a methodical 17-13 win over No. 24 Boise State on Friday night. The junior literally carried the No. 13 Spartans to a come-from-behind victory over the Broncos. And, with the game on the line, Bell was at his best, scoring the second of his two touchdowns in the fourth quarter to push Michigan State ahead.

3. Iowa may have found a running back. Damon Bullock ran 30 times for 150 yards in a harrowing 18-17 victory over Northern Illinois in Chicago. It was the sophomore?s 23-yard touchdown run with 2:15 left that proved to be the winning points, saving the day for the Hawkeyes. The running back spot has been a hexed position in recent years in Iowa City, with injury and transfer hammering depth at the spot. But, it looks like Bullock is an answer.

4. Taylor Martinez seems to have turned the corner as a passer. The junior hit 26-of-34 passes for 354 yards and five-count ?em-FIVE touchdown passes in what was a career-best performance. Martinez spent time in the offseason working with quarterback guru Steve Calhoun in southern California. Needless to say, it was time well spent. Best of all: The Cornhuskers downed Southern Miss, 49-20, in their season opener.

5. The Urban Meyer era began with a bang at Ohio State-and the future looks very bright. Yes, the Buckeye offense sputtered in the opening quarter, as Ohio State trailed, 3-0, and was out gained 172-48. After a sensational one-handed 23-yard touchdown catch by Devin Smith (Watch it!) that got the Buckeyes on the board early in the second quarter, Ohio State took off and outscored the RedHawks, 56-7, en route to the 56-10 win. Expect the Buckeyes to be 4-0 (UCF, Cal, UAB all at home are next) as they head to Michigan State for the Big Ten opener on Sept. 29.