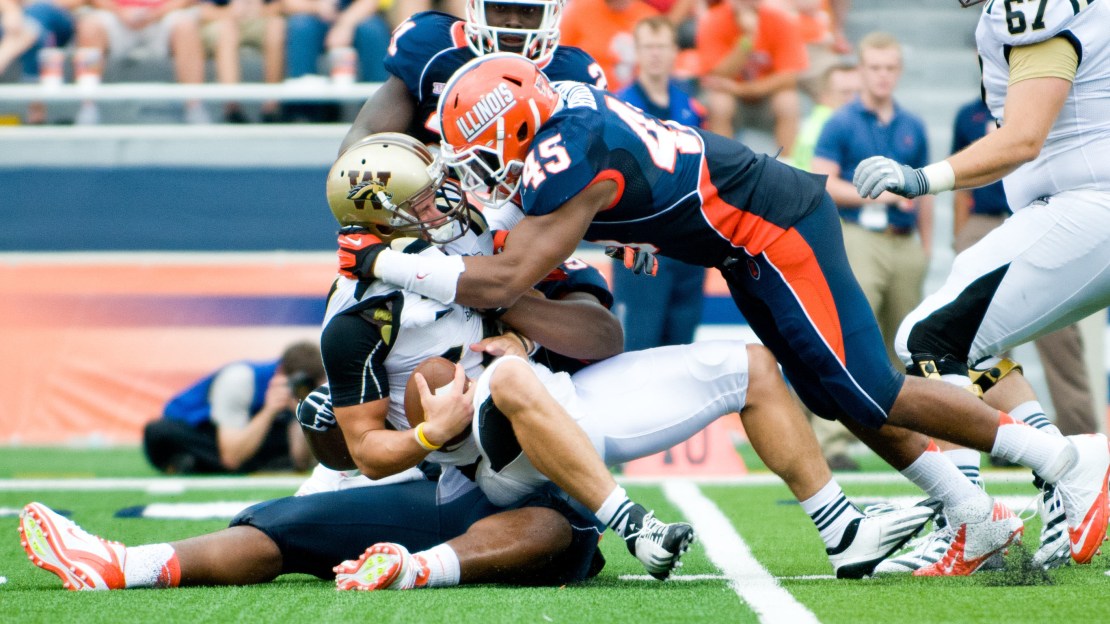 With two Big Ten games under my belt from Thursday and Friday, I locked in on the four early Big Ten games Saturday. Here are my Snap Reactions, where I list the three things I learned from each game. What did you learn? Come tell me in the comment section at the bottom of this post.

1. The Urban Meyer era got off to a nice start with a dominating effort. The Buckeyes fell behind 3-0 in a lackluster first quarter and then outscored the RedHawks, 56-7. The new spread offense totaled 538 yards with QB Braxton Miller showing a grasp of the attack. The sophomore hit 14-of-24 passes for 207 yards with two touchdowns. Still, he got off to a slow start and needs work on his accuracy and touch. Miller did his most damage as a runner, gashing Miami for a school single-game quarterback record 161 yards rushing.

2. Many feel this could be the top defense in the Big Ten. It didn?t disappoint today, holding Miami to minus 1-yard rushing on 20 carries. The Buckeyes also notched three turnovers vs. a RedHawk team that was left to pass, pass, pass with 54 attempts.

3. The receiving corps was a big question coming into the season. But, it looks like Philly Brown may step up as the top target. He led the team with seven catches for 87 yards and a touchdown. And Devin Smith also may be special, as he had the catch of the game, making a leaping, one-handed 23-yard touchdown catch early in the second quarter to get Ohio State on the board for the first time. That sparked the Buckeyes after a slow start that saw Miami out gain OSU, 172-48, in the opening stanza.

1. The Illinois defense looks as good as advertised, holding Western Michigan to minus six yards rushing on 19 carries. The Fighting Illini also picked off three passes and forced four total turnovers, with the defense scoring an icing touchdown as Ashante Williams ran back an interception 60 yards for the final score.

2. The spread offense has work to do. The Illini built a 17-7 lead, but the attack sputtered for most of the game. Then late in the contest, QB Nathan Scheelhaase left with an ankle injury late in the third quarter after he hit 11-of-18 passes for 126 yards with a touchdown and pick. Aside from an early 64-yard touchdown pass from Scheelhaase to Ryan Lankford, the Illinois offense didn?t look sharp. And the leading rusher was tight end Jon Davis, who lined up as an H-back and ran six times for 54 yards.

3. The offensive line was a big concern coming into the game. And that hasn?t changed after what largely was a lackluster effort. The Fighting Illini were out gained, 259-248, despite dominating time of possession, 35:02-24:58. Up next is a game at Arizona State that figures to be a big challenge. This make-shift unit most start to come together to get a better push.

1. The defense failed to make some key stops in the second half when Penn State was trying to protect a lead. Yes, the unit was on the field too long (Ohio led time of possession, 34:55-25:05) with the offense sputtering. Still, the Nittany Lion defense has too much talent to not be able to get off the field on that last Bobcat drive that resulted in a game-sealing touchdown throw. Penn State had no sacks and forced no turnovers. There is too much talent on the front seven for that to happen against a MAC team on your home field.

3. Spirit, energy and excitement can only take a team so far. An energetic and passionate crowd had Penn State fired up from the start, as the school had its first game without a Paterno on the sideline for the first time since 1949 in moving to a 14-3 halftime lead. But that intangible quickly dissipated as the game marched on, with an underrated and well-coached Ohio squad that is the pick to win the MAC slowly taking over and winning arguably the biggest game in school annals. Up next is a trip to Virginia for a Nittany Lion program that may struggle to reach .500.

1. The Wildcats may have found a new quarterback in Trevor Siemian. After Syracuse stormed back from a 22-point hole to take a 41-35 lead with 2:40 left, Pat Fitzgerald inserted Siemian for Kain Colter. And Siemian proceeded to lead the Wildcats to a game-winning touchdown drive, hitting Demetrius Fields with a 9-yard scoring strike with 44 seconds left. Siemian hit 8-of-11 passes for 78 yards on the drive.

2. The defense has work to do. Last year, Northwestern was famous for blowing second-half leads. And it almost did it again today, allowing the Orange to rack up 596 yards with 470 coming through the air. Syracuse quarterback Ryan Nassib hit 44-of-65 passes with four touchdowns. NU forced three turnovers, and the Orange had 12 penalties.

3. Venric Mark may be the answer at running back. The diminutive (5-8) Mark ran 14 times for 82 yards, averaging 5.9 yards per tote. He show incredible quickness on many plays, while also displaying toughness on some inside runs. This was Northwestern?s eight consecutive season-opening win. Next up: A visit from Vanderbilt.