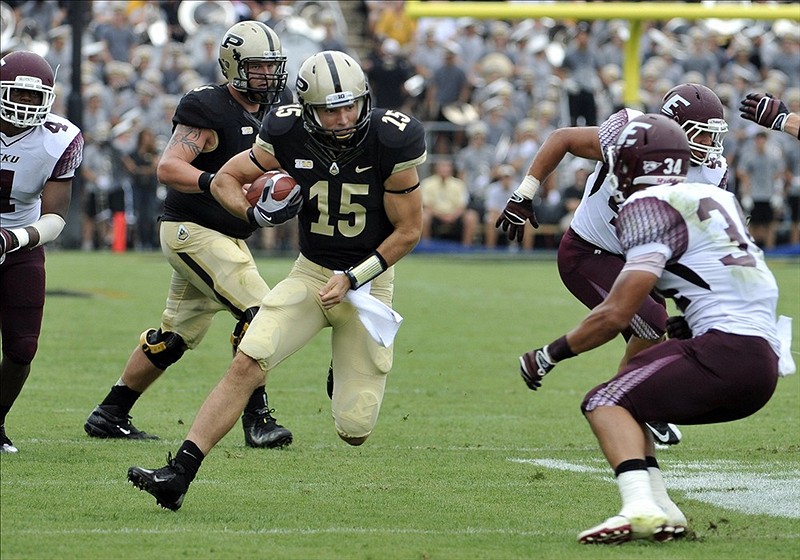 Purdue looks to be in control of the game as it leads 34-6 at the end of the second quarter. The Boilermakers opened up the lead, 20-0, after marching down the field for an eight-play, 45-yard drive that ended when Kurt Freytag pounded in a seven-yard touchdown run.

Eastern Kentucky made the score 20-6 after Matt Denham ran 30 yards to paydirt to finish off a 75-yard drive. Jared McClain's 24-yard pass to Cameron Bailey took the Colonels from the 46 and across midfield to ignite the drive.

Purdue made its lead 27-6 when Robert Marve threw a 13-yard touchdown pass to Antavian Edison on the last play of an eight-play, 79-yard drive. The Boilermakers used Marve's 46-yard pass to fuel the drive.

Purdue expanded its lead to 34-6 thanks to a six-play, 37-yard drive that ended when Akeem Shavers turned a handoff into an eight-yard touchdown. The Boilermakers started in good field position when Will Lucas intercepted McClain's pass. Purdue ran just one time during that march down the field.

Eastern Kentucky will receive to start the second half.

Track all the action with us and don't forget that we'll be providing quarterly updates throughout the game.