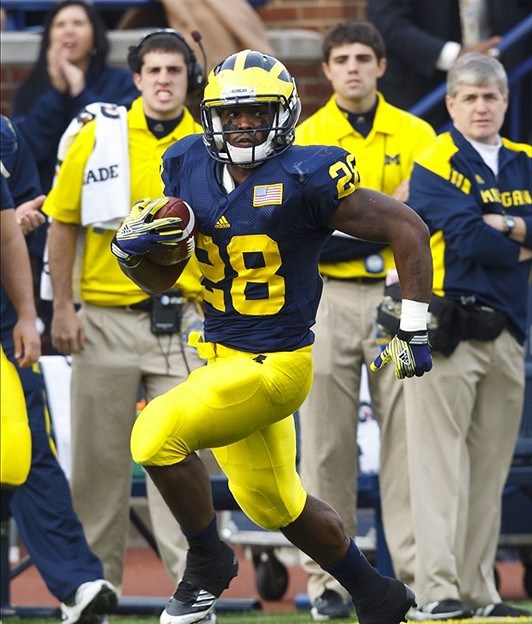 Michigan coach Brady Hoke announced that running back Fitzgerald Toussaint and defensive linemen Frank Clark won?t make the trip to Arlington, Texas, for the Alabama game to be played on Saturday at 8 p.m. ET.

"Fitzgerald Toussaint and Frank Clark have been suspended for one game and will not make the trip to Dallas for Saturday's game,? Hoke said in a statement.

"The decision was not easy, but I feel it is in the best interest of this program and for these kids, and those always will be my priorities. We have choices every day, and you have to be accountable to this program, your teammates, your family and the University of Michigan."

The absence of Toussaint, who was arrested for suspicion of driving under the influence in July and subsequently suspended by Michigan, is most key.

Michigan already faced long odds to beat the defending national champion Crimson Tide even with Toussaint-who recently pled guilty to a lesser charge of driving visibly impaired–in the backfield. Now, without him, a bigger onus will be placed on senior quarterback Denard Robinson along with a defense with a suspect line that could have used Clark.

Minus Toussaint-who enjoyed a breakout junior season in 2011 with 1,041 yard rushing and had been practicing with the team–Michigan will turn to Thomas Rawls, a 5-10, 219-pound sophomore who is the most physical back on the roster. If the Wolverines want a running back with a burst, they can turn to redshirt freshman Justice Hayes. Diminutive (5-6) senior Vincent Smith is another option, but he?s more of a third-down back.

The Wolverines are coming off a surprising 11-2 season in Hoke?s first year in Ann Arbor, capping the campaign with a Sugar Bowl triumph over Virginia Tech. And Michigan is picked by many to win the Big Ten this season, ranking No. 8 in the preseason AP poll. No Big Ten team is ranked higher.

A loss to Alabama obviously won?t damage Michigan?s chase for its first Big Ten title since 2004, but this game is seen by many as a chance for the conference to show America that it can go toe-to-toe with a nationally elite program like Alabama.

But now, without Toussaint, Michigan?s task is much tougher.