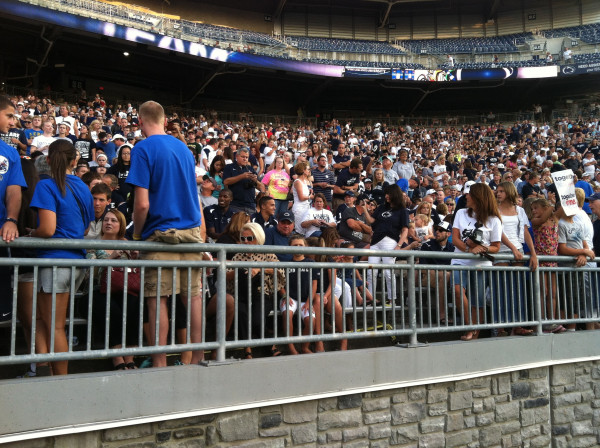 Friday night marked the annual Penn State Football Eve at Beaver Stadium, and for several reasons, this pep rally was different than all the ones before it. For the obvious reason, this was the first event without head coach Joe Paterno, who was fired late last year and died months later. On top of that, the Penn State fan base has really rallied around this team and coach Bill O'Brien in the wake of the NCAA sanctions that crippled it this offseason.

And, as expected, the traditional cheer of "We Are … Penn State" roared through the stadium on a night where Penn State officials estimated 21,000 fans in attendance. Expect a crazy atmosphere at Saturday afternoon's season opener.

#PSU Hoops coach Pat Chambers doing all he can to whip the crowd into a frenzy,including getting down in a 3 point stance.

got some buzz going in Beaver Stadium for #pennstate Football Eve!! enthusiastic crowd!

In walks the team for rally. PennState coach O'Brien walks in last. Crowd loud on field. My ears hurt.

Great to be at football eve right now. Can't wait for tomorrow

The amount of support we have right now is unbelievable! Thanks to all our fans… Just a few more hours! #OneTeam

great night for #pennstate Football Eve. estimated final attendance 21,000 fans as they streamed in to fill the student section.