Friday's Links: Is Michigan up to the task? 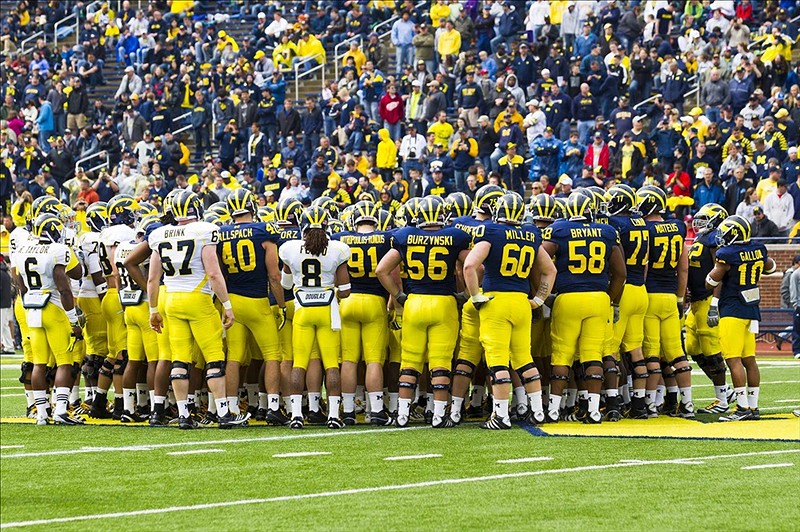 Most pundits agree: Michigan is an underdog-perhaps a big underdog-in its game vs. Alabama this Saturday in Arlington, Texas. But, history has shown us that the Wolverines can succeed vs. the mighty SEC, winners of the past six BCS national titles. Nick Baumgardner of MLive.com has taken a neat look at five memorable Wolverine games vs. SEC foes, the first of a handful of Big Ten news links you should read the day before our first college football Saturday of the season.

So, how will Michigan fare against the defending national champion Crimson Tide? Kyle Meinke of MLive.com has a nice preview of the game, complete with a predicted score. A big key, according to Meinke: quarterback Denard Robinson, who typically has struggled vs. the best defenses he has faced in the past.

I think it?s safe to say that if Robinson can pull off the upset, he will jump to the top of the early Heisman race. But the great Lore Tate of the Champaign News-Gazette thinks Michigan is on the spot.

Spartan challenge: While Michigan has a tall task in playing Alabama, Michigan State also could have its hands full playing host to Boise State-a perennial BCS buster that has lost a total of six games in the last six seasons–tonight in its season opener. But, the Spartans love opening vs. a challenging foe.

Get used to playing tough non-conference foes, Spartans. Crack Athletic Director Mark Hollis has lined up games vs. the likes of Alabama, Oregon and Miami (Fla.). Augmenting strength of schedule figures to be a key move as college football moves to a playoff that likely will give weight to schedule toughness in the selection process.

Penn State builds: There are many things I like about what Bill O?Brien has done at Penn State. One of them is the staff he has built. It?s a nice blend of youth and experience. And one of the most experienced and best assistants is offensive line coach Mac McWhorter.

The sage McWhorter is one of the best in the business, having built some great lines over the years at places like Texas and Georgia Tech. He has the potential for stout front this season at Penn State. And that?s vital for an offense that has questions at the skill positions.

McWhorter will have his line ready for Saturday?s season-opener vs. Ohio. And, ?Nittanyville,? once known as ?Paternoville,? also already is ready. In fact, the student campground is thriving.

Buckeye change: There will be so much about the Ohio State that is new this season, as Urban Meyer has installed a spread attack. Gone are the days of ?Tresselball.? Zzzzzzzzzz. No, the Buckeyes will have multi-receiver sets and play at a quick pace-among other things. But the Ohio State defense under Meyer? It won?t look vastly different that it has in the past.

In fact, the Buckeye defense could be the best in the Big Ten-in addition to Michigan State?s talented group. If there is a difference between this Ohio State defense and last year?s edition, this year?s defense may be more aggressive.

Depth charges: With the season-opener vs. Western Michigan looming, Mark Tupper of the Decatur Herald-Review takes one last look at the Illinois depth chart.

The most unsettled position? That?s easy: It?s the offensive line. Expect lots of mixing and matching on Saturday.

Center stage: The competition to be the starting center at Nebraska was fierce. The winner was a big surprise: Justin Jackson, a former walk-on. Making his rise to No. 1 a bit more surprising is the fact he moved from defense in spring practice. Now, Jackson holds arguably the most vital spot on the front.

Up front: Speaking of centers, none are as tough and gritty as Iowa?s James Ferentz. What makes him special is the toughness and grittiness that he plays with on the interior. And, yes, he?s feisty.

Ferentz plays with an edge for a Hawkeye front that could develop into a strong unit. No doubt, it?s a unit that needs to develop a push in the ground game for a group of unproven backs.

Back in the mix: There may not be a more important player for Wisconsin than defensive end David Gilbert.

He is back from a foot injury that ruined his 2011 season. Gilbert had 10 tackles and three sacks in the four games he played, showing his vast skills. Imagine what he can accomplish in a full season. With Gilbert back in the lineup, the Badger defense will have a playmaker up front. He can be a pass-rushing force off the edge for a defense that needs playmakers.

National spotlight: I will leave you with this from Dan Wetzel of Yahoo! Sports, who says this weekend is a GREAT opportunity for the Big Ten to show that it can compete with the best in college football.

Wetzel is exactly right. Yes, one weekend won?t make or break any conference or team, but Michigan?s game vs. Alabama and Michigan State?s tilt vs. Boise State are prime opportunities vs. marquee foes for the Big Ten to show it still has big muscles. After this weekend, there really aren?t any other great non-con foes for the Big Ten.

My take: This is interesting, if true. Non-conference schedules with two BCS foes would be great for fans. As a point of reference, the only Big Ten teams that are playing two BCS foes this season are Northwestern (Vanderbilt, Boston College, Syracuse) and Michigan (Alabama, Notre Dame).

Bo Pelini: NU has "a chance to be a very, very explosive offense this year," and deepest at skill positions since he's been with #Huskers

My take:  This has me excited. I just think the fact this will be Tim Beck?s second season as offensive coordinator will help the Husker offense. I love the receivers and running backs-and the line has potential. The key is quarterback Taylor Martinez. Have we heard this before?