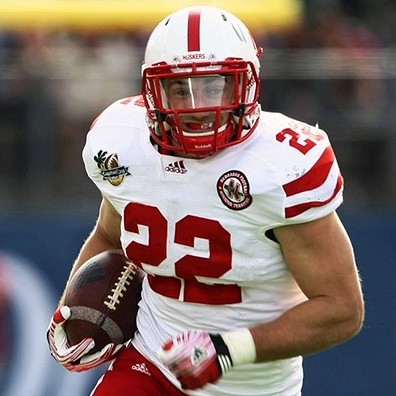 When the discussion of top Big Ten running backs comes up, Wisconsin?s Montee Ball almost always is mentioned first-and rightly so, coming off a spectacular 2011 that saw him be a Heisman finalist. Michigan?s Fitzgerald Toussaint and Michigan State?s Le?Veon Bell usually are mentioned next. And then there is Nebraska?s Rex Burkhead, who seemingly always gets lost in the conversation. The senior may be the top back in the Big Ten this season.

He finished third in the conference in rushing last season, rambling 284 times for 1,357 yards and 15 touchdowns. The 5-11, 220-pound Texan proved to be the ultimate workhorse in 2011, rushing for over 100 yards in seven games and he carried the ball at least 20 times in eight games. Burkhead epitomized his value in the regular-season finale in 2011 against Iowa, when he carried the ball a school single-game record 38 times for 160 yards.

I caught up with Burkhead-who is set to graduate in three and a half years in December–this week as he prepared for the Cornhuskers? season opener against Southern Miss.

Q: What are your goals for this season?
A: I have some personal ones, but none that I really want to share. My team goal is to get to the Big Ten title game and win it. That is our No. 1 team goal. Personally, I want to lead this team day in and day out, bring energy and focus to practice, lead by example and lead vocally, as well. And that hopefully will lead us into the Big Ten title game.

Q: The coaches I talk to marvel at your drive, determination and work ethic. Where did you cultivate those traits?
A: My parents are very hard workers, so growing up I saw that at an early age. They worked their butts off day in and day out. And I made sure I did the same, whether it was my school work, doing chores at home or sports. And they always made sure I worked hard, too. They always let me know that nothing comes easy, that you have to work for it. My brother was a huge emphasis on me, as well. I got to play with him when I was a freshman in high school. I would see how after practice, he would head straight for the weight room. And when he got home, he was in his books all night. So, that?s something I took from him.

Q: You had over 30 carries vs. Iowa last year. Do you like carrying the ball that much?
A: Oh, yes. As a competitor, you are up for anything. You want the football in your hands. If you don?t, then I don?t think you are a competitor or a winner. But I have the utmost confidence in the coaches and respect them to allow me to be in that position. But carrying the ball that much in every game probably isn?t a good thing. But if the coaches need me to do it, I am up for it.

Q: Will you be used in any different way than you have been in the past?
A: I am not sure. Only time will tell. I know they want to get other backs involved and spread the wealth around. We will see as the games go on.

Q: How do you feel when you are mentioned as a Heisman Trophy candidate? The school has even announced that it will have a Heisman campaign for you.
A: It?s humbling, and it?s a cool honor to be recognized. But, as I said before, my ultimate goal is to get to the Big Ten title game. All of that individual stuff will take care of itself. If you worry about that, you are going to lose track of what your main goal should be-and that should be your team goals and for us that?s the Big Ten title game.

Q: Do you ever see Bo Pelini laugh?
A: I have. He?s a funny guy off the field. You just have to get to know him and hang out with him. I love Coach Bo and I love everything about him. He wants what is best for his players and I respect him to the utmost.