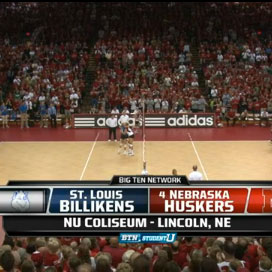 Before Nebraska and Saint Louis faced each other in their season opening volleyball match Friday, the Huskers and their home crowd observed a moment of silence in honor of former Saint Louis volleyball player Megan Boken. The 23-year-old native of Wheaton, Ill., was shot and killed in her car Saturday in St. Louis. The game was carried on the Big Ten Digital Network and you can watch the moment in the video in this post.

Boken played for the Billikens from 2007-10 and concluded her career ranked fourth in matches played (127), fifth in digs (1,212), 13th in points (1,143.5) and 14th in service aces (102) on SLU's all-time lists. She was named to the Atlantic 10 All-Conference second team and the A-10 Championship All-Tournament team as a junior in 2009, and she was All-Conference honorable mention in her senior season. Read more at SLUbillikens.com.

Boken had graduated last year with a bachelor?s degree in business administration. She was in St. Louis for an alumni volleyball game at the the university on Saturday when she was shot. Two 18-year-old cousins have been charged in her death, the St. Louis Circuit Attorney?s office announced Friday. Boken was buried Thursday in Wheaton.