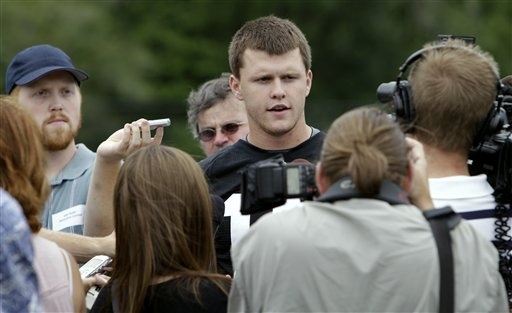 Our annual summer journey across the Big Ten is over, and what a trip it was. From Lincoln, Neb., to State College, Pa., we saw all 12 Big Ten teams practice and had a chance to catch up with all the coaches and players. Read our tour coverage here and watch the video here.

While the tour is complete, your questions continue to come in. Read my answers to your latest queries in this post and don't forget to send me your future questions, either in the comment section below or on Twitter (@BTNTomDienhart).

You said you saw a lot of good things at the Michigan State practice. That has me excited. But, should I be concerned that the running backs broke some tackles against what is supposed to be a great defense? – Micah

Of course not. Players are going to make plays, and I am talking about running back Le?Veon Bell. While he made some nice runs in the practice I watched, the Spartan defense also had its moments and muted Bell, too. This is a talented and deep team that I think is playing with a chip on its shoulder. It still hasn?t reached the summit under Mark Dantonio, as Michigan State still is searching for its first Rose Bowl appearance since the 1987 season. The team I saw was a bit tired and had ?camp legs.? Still, there were plays being made on both sides of the ball. I really love this defense from front to back. In fact, the only defense that looks to be on par with the Spartans? is Ohio State? unit.

Can you ask the Big Ten coaches which position is the hardest to recruit? – Dave Dalgeish

I have asked many coaches this question over the years. And the one spot that always comes up is defensive tackle. It is very difficult to find big, fast players. They always are overvalued. Look at the NFL. Time and again, teams ?reach? for defensive tackles in the draft-and often make poor selections on players who aren?t as good as scouts thought. Why, because they are desperate for good tackles. And it?s an abundance of talent at defensive tackle that I think distinguishes the SEC from every other league in America. The SEC has more big, fast and talented defensive tackles than anyone. And that?s a big reason why the defenses in the SEC annually are among the best in the nation.

How much of a risk is it for Ohio State to have one of its best cornerbacks in Bradley Roby return punts? – Vince

Yes, it?s a risk. But coaches always want to get their playmakers on the field. And Roby is one of Ohio State?s top playmakers. The guy has blazing speed, which means he?s a threat to go the distance each time he touches the ball. Depth at the corner buffers the situation if Roby gets hurt running back a kick, as the Buckeyes have talented reserves like Adam Griffin and Doran Grant. Still, it?s worth the risk for Ohio State to have a guy back there who can score a quick six points in the return game each time he touches the ball.

What did you think of the Michigan freshmen? I know Brady Hoke brought in a lot of good ones in his 2012 class. Which ones do you think could help this fall? – Matt Pierson

Hoke told me after practice that he thinks as many as 12 freshmen could play this fall. Among them: Kyle Kalis, Ben Braden on the o-line; receivers Amara Darboh and Jehu Chesson; d-lineman Ondre Pipkins; linebacker Joe Bolden; safety Jarrod Wilson; tight ends A.J. Williams and Devin Funchess. This still is a relatively young team, as you can tell.

I like Iowa to meet Wisconsin in the Big Ten title game? What do you think? And do you think Hawkeye quarterback James Vandenberg will lead the Big Ten in touchdown passes? – Dave Clarman

I like your pick of Wisconsin in the Leaders Division. But Iowa? To win the Legends? That is bold! It could happen, but I like Michigan State and Michigan. I just think the Hawkeyes have too many issues (defensive line, overhauled staff, running back) to be a pick to advance to the Big Ten championship game in Indianapolis. As for Vandenberg, he very well could pace the Big Ten in touchdown tosses, as Iowa may have to rely heavily on the passing game if the ground attack never gains traction.

Since college football seems to be an arms race when it comes to facilities, do you think Ohio State should renovate what it has? The Woody Hayes Center was last renovated in 2007. Many schools have done a lot since then with their facilities since then. – Sarah

It never hurts to continue to build, expand and renovate. But I have seen every football facility in the Big Ten, and I think Ohio State?s remain on par. Nebraska, Michigan and Penn State all have great set ups. Michigan State and Iowa also have nice accommodations. But Ohio State is on par—or not far behind-any of those schools. And it?s ahead of most, including Wisconsin (which is in the process of a big upgrade right now.) So, I think the Buckeyes are OK for now. But, it?s always good to plan ahead and try to stay on the upward curve when it comes to facilities. Because, we all know it matters in the recruiting game.