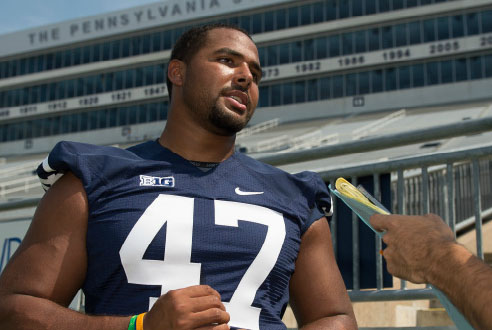 The Big Ten is loaded with talent on the defensive line, something we highlighted at media days, so it's no surprise the Big Ten is well-represented on Athlon's list of the college football's top defensive linemen for 2012. Three defensive ends, headlined by Ohio State's John Simon, at No. 3, and four defensive tackles, led by Purdue's Kawann Short, at No. 2, made Athlon's cut. See where the publication ranks all the Big Ten representatives in this post.

"Simon is the key player on a veteran Ohio State defensive line, ranked by Athlon as the best in the Big Ten. This wrecking ball is as difficult as anyone in the country to block from the outside. He?s improved each year, topping out at 16 tackles for a loss, seven sacks and three pass deflections last season. Urban Meyer?s background is on offense, but he has a knack for utilizing great pass rushers like Carlos Dunlap, Derrick Harvey and Jarvis Moss at Florida."

"Entering his junior season, Gholston appears to be only scratching the surface of his potential. The Michigan State coaching staff wasted no time in getting the Detroit native involved as a freshman, as Gholston played in 10 games and recorded 13 stops. In his first year as a starter in 2011, he recorded 70 tackles, five sacks and 16 tackles for a loss last season. Gholston earned second-team All-Big Ten honors last season and should be in the mix to earn All-American honors in 2012. Without Jerel Worthy plugging the middle, opposing offensive lines will devote more attention to Gholston?s side. Despite a few more double teams coming in his direction, the junior is poised to have his best overall season, which could be his last in East Lansing with NFL scouts already raving about his potential."

"At 6-foot-6 and 240 pounds, Buchanan has intriguing size and ability for the pro ranks, but he elected to stay at Illinois rather than follow linemate Whitney Mercilus to the NFL Draft. Back for his senior season, Buchanan will try to show he can be a team?s top pass rusher after working aside Mercilus last season. Buchanan?s 7.5 sacks were less than half of Mercilus? total (16) but still ranked fourth in the Big Ten."

"With his combination of size and athleticism, Short is drawing attention from NFL scouts and is expected to be a first-round pick in 2013. The East Chicago native has started all three seasons at Purdue and is coming off his best year, recording 54 stops, 17 tackles for a loss and 6.5 sacks. Improving the run defense is one of the top priorities for coach Danny Hope this season, but Short?s return to West Lafayette should help the Boilermakers improve on last year?s statistics (9th in the Big Ten in rushing defense). Short was named Purdue?s team defensive MVP last season and is an Athlon second-team All-American for 2012."

"Hankins is developing into the next great defensive lineman to come out of the Ohio State program. In his first year as a starter last fall, the Michigan native recorded 67 total tackles, including 14 for a loss and three sacks. The large but nimble Hankins has slimmed down to 317 pounds for his junior season. ?Hank is now a little less of an immovable object and more of an unstoppable force,? says Ohio State center Corey Linsley."

"With Devon Still moving on to the NFL, it?s up to Hill to become Penn State?s leader in the trenches. He recorded 59 stops and 3.5 sacks last year, while earning honorable mention All-Big Ten honors. Hill will likely see more double teams without Still, but the 6-foot-1 senior should be able to finish his career by pushing for All-American honors in 2012."

"One of three returning starters and two starting tackles on the Illinois defensive line, Spence started at defensive tackle since Day One of his redshirt freshman season in Champaign. The 6-1, 300-pounder recorded 69 tackles last season, a high number for an interior lineman, and helped anchor a defense that ranked seventh nationally."

That just about covers it. It's tough to say Athlon missed any Big Ten name. It's going to be a lot of fun watching the trenches this season, and these are the guys who will be doing the most damage. One player on here who may outperform his ranking is Michigan State's William Gholston (No. 5). Our Tom Dienhart is as high as any on Gholston:

There he is, America: the best DE in the nation: William Gholston! #Spartans #B1G pic.twitter.com/CReNNQHV