Dienhart: My thoughts from Michigan practice 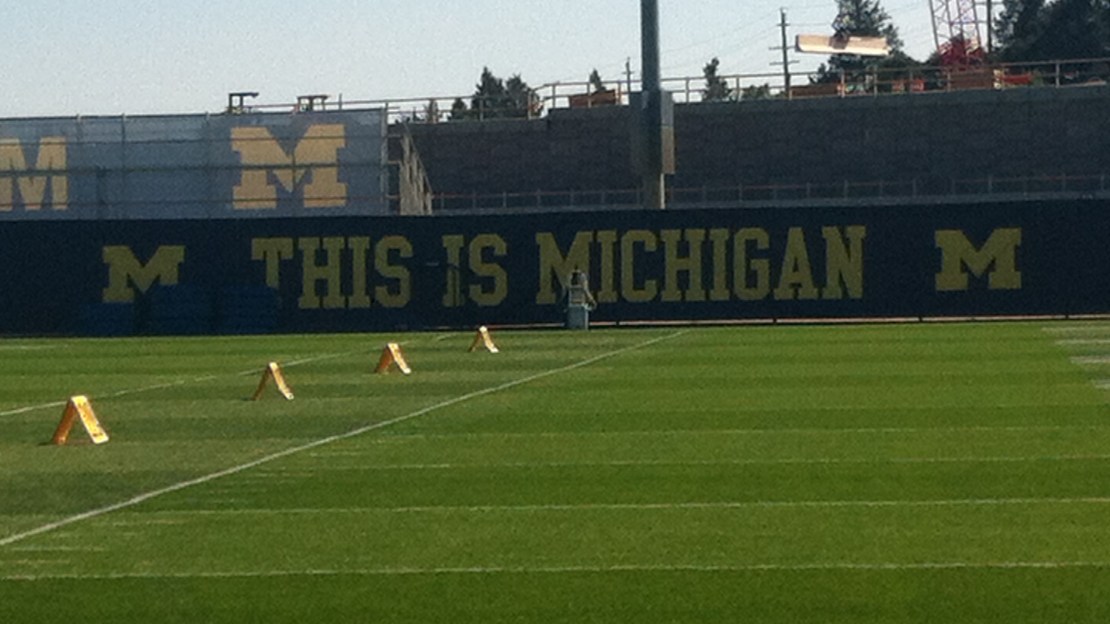 The final stop on our annual summer football tour was Thursday, and we spent the day in Ann Arbor, Mich., checking out Brady Hoke's talented Michigan team. I had many observations from the practice, none bigger than Denard Robinson looked more comfortable than ever under center. He?s such a dangerously quick athlete who can legitimately score any time he touches the ball. His skills were on full display today. But more importantly, Robinson looked better as a passer-when he was able to set his feet, which always is key for him.

Devin Gardner worked with the ?2s? and looked solid. But the guy to watch is Russell Bellomy. Brady Hoke told me he is faster than you think. I also asked him if he?d be comfortable if Bellomy had to play, and Hoke said he would.

The line was interesting to watch, as the unit seems to be coming together after being reconfigured after last season. I made sure to watch new center Ricky Barnum, who was moved from left guard to take over for David Molk. Barnum isn?t as athletic or savvy as Molk, but he looked good coming off the ball and seems to have a chemistry with Robinson. Barnum is strong. Taylor Lewan is a beast at left tackle. He looked dominating at times in drills, showing good feet. Lewan is long and angular like so many classic Michigan tackles.

The spot next to Lewan, though, is still up for grabs. Elliott Mealer, Joey Burzynski and true freshman Kyle Kalis are all battling. It was difficult not to be impressed with Kalis, who showed strength and power that belies his freshman status. But on this day, Mealer ran with the first team and looked good. Patrick Omameh looks set at right guard, while converted left guard Michael Schofield is set at right tackle. He looked powerful today. A true freshman who caught my eye is tackle Ben Braden, who Hoke told me may play this year. Another is Erik Magnuson.

Speaking of true freshmen, I asked Hoke how many could play roles this season, and he said as many as 12. Guys like Kalis, Braden on the o-line; receivers Amara Darboh and Jehu Chesson; d-lineman Ondre Pipkins; linebacker Joe Bolden; safety Jarrod Wilson; tight ends A.J. Williams and Devin Funchess. For a team that many thinks will be the best in the Big Ten, youth will be served.

Receiver is a spot I watched closely. There isn?t a lot of size, and Roy Roundtree-the team?s top target-was limited in drills and did some running on the side after recent knee surgery. I talked to him after practice and he told me he expects to be ready for Alabama (see video above). Roundtree was running well in individual work. Jerald Robinson is a big wideout with potential. I like him. Drew Dileo and Jeremy Gallon are small wideouts who get in and out of cuts quickly. Offensive coordinator Al Borges told me Gallon has been the most consistent wideout in camp.

Chesson and Darboh are good-looking pass catchers with size. They will play. Gardner is a wild card. How much will the quarterback-by-trade play at receiver? I asked Borges about Gardner, and his eyes got big. Borges says Gardner doesn?t know how good he can be. He?s an athletic freak who will figure in the rotation. Count on it.

Tight end is a thin spot. Brandon Moore is the top option. He?s a big man who has gotten better at blocking-but he has done little in his career and basically has the spot by default with just a handful of career catches. The aforementioned true freshmen, Williams and Funchess, also figure in. Still, don?t expect too much from the tight ends.

Michigan is blessed with nice depth at running back. Fitz Toussaint is practicing after missing time because of a DUI arrest. He looked good, showing a burst of speed to the edge and toughness. We still don?t know if Hoke will let him play in the opener, but at least he?s practicing well. Thomas Rawls is a big, tough back and showed me he can move the pile and carry the load if need be.

I talked to running backs coach Fred Jackson, and he has been pleased with his backs-and Rawls in particular. Vincent Smith is quick out of the backfield and showed me good hands. There may not be a better third-down back in the Big Ten. Justice Hayes is a fast redshirt freshman.

I paid close attention to the d-line, which I think is a vulnerable area. Craig Roh looked good at strong side end. He has gotten bigger and looked good vs. the run. Defensive line coach Jerry Montgomery told me massive tackle Will Campbell looks dialed in and ready for a big senior season. For a man of his girth, he moves well and can get up the field quickly. But Montgomery said Campbell still can be dogged by inconsistency but seems primed for a big senior season.

Jibreel Black looks comfortable after moving inside from tackle. Pipkins is back after suffering a scare with a recent neck injury. He was a ballyhooed recruit. He is strong for his age and also showed good feet. Brennen Beyer has a burst off the edge from his weak side end spot. He could be the top pass rusher on this front. Depth at end doesn?t look great. I asked Montgomery who would be his starting line if they had a game today, and he said it would be Roh, Campbell, Black and Quinton Washington.

The linebackers from last season are back. Kenny Demens is a rock in the middle. He looked good today directing traffic. Behind him is Bolden, who went through spring drills after graduating early. The kid is going to be special. Jake Ryan looks poised for a breakout sophomore year after enjoying a good debut in 2011. He just has a knack for making big plays. He also could slide in at end on third downs and rush the passer. Desmond Morgan always shows a good feel for the game. This is a solid group but must blitz and tackle better.

[BTN.com: Read all of our summer football tour coverage]

The secondary looks set, showing good chemistry. Safety Jordan Kovacs is the glue who keeps it all together. He just has a knack. Thomas Gordon is the other safety. The corner duo of Blake Countess and J.T. Floyd will be one of the league?s best. Countess looks like a future superstar after a strong true freshman season in 2011. He is quick in coverage while also showing toughness in run support. While Hoke likes his corners, he says neither Countess nor Floyd has great closing speed. Wilson was running with the second-team and looks good. He?s a big kid who reminds me of Ernest Shazor with how he is built.