Dienhart: What I Saw at Michigan State Practice 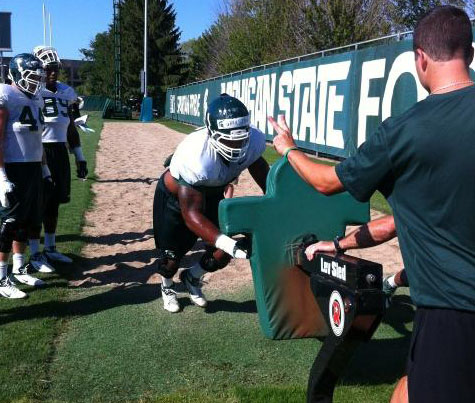 The BTN Football Tour took us to Michigan State practice on Wednesday, and I watched for a number of things. First, quarterback Andrew Maxwell is looking good as he threw the ball well today. Maxwell also showed nice touch on his passes. And his arm looked good on passes down the sideline and on posts.

Coaches think Maxwell is a better athlete than departed Kirk Cousins-and his arm is every bit as good. In fact, it may be the best in the league. We just have to wait to see how Maxwell performs when the lights are turned on when the season starts. He just has a presence about him.

Le?Veon Bell is a beast. I have seen some big backs on the tour, and Bell matchups up with any of them. He looked good running between the tackles. Bell broke a lot of tackles. Now that he won?t have to share carries, he could be primed for a big season. Larry Caper and Nick Hill are nice backups who could start. Remember, Caper led the team in rushing in 2009 as a true freshman. Hill is a diminutive back who shows great burst and quickness, which he showed while also working out as a return man.

BTN bus has pulled out of East Lansing! You have a mighty fine team, #Spartans!! Maybe we will see you in Indy! #B1G pic.twitter.com/PtfnNBJC

I was curious to see the receiving corps with so much attrition, as players like B.J. Cunningham, Keshawn Martin and Keith Nichol are gone. Before I arrived in East Lansing, I was told Bennie Fowler was having a great camp. And he looked good to me. I talked to receivers coach Terrence Samuels before practice, and he said he has six or seven wideouts he?s comfortable playing. I asked him who would start if he had a game today-and he said Fowler and Tony Lippett.

Fowler has had to deal with foot issues that ruined 2011 after a promising debut in 2010 but looks primed for a big season. He?s a big target. Lippett, who also has played cornerback, showed me great quickness and athletic ability. You can see why coaches had him playing both ways. He?s special. He just must catch the ball consistently. When MSU went with three wides, Keith Mumphery came in. He?s a big target. A true freshman to watch is Macgarrett Kings, Jr., who figures to be in the rotation. Tennessee transfer DeAnthony Arnett had has moments, and Samuels is pleased with him. True freshman Aaron Burbridge remains out.

Tight end Dion Sims has been a star in camp. Maybe THE star. The guy has slimmed down, which makes him even more elusive and deadly, as he is over a wrist injury that dogged him in 2011. Sims is catching the ball better and also blocking well. He was dressed today but did little as he was banged up. Still, Sims seems primed for a big season. Look out. With Sims limited, we saw lots of Derek Hoebing, Paul Lang and Evan Jones.

This was one of the better offensive lines I have seen on the tour, quick and proficient in zone-blocking schemes. In fact, it?s the best front since the Mark Dantonio era. Today, the front looked like this: Dan France at left tackle; Jack Allen at left guard; Travis Jackson at center; Chris McDonald at right guard; Fou Fonoti at right tackle. The regular guard is Blake Treadwell, but he is out with an ankle injury and may miss two or three games. I talked to line coach Mark Staten before practice, and he is pleased with the unit?s development. He says McDonald has to be a leader, and he says Jackson is really coming on at center. Staten also is pleased with Allen, a redshirt freshman.

The only defensive line I have seen on this summer tour as good as this one was at Ohio State. William Gholston and Marcus Rush are a terrific end tandem. Gholston looks the part of an All-American and he is frighteningly fast for a man of his size. And he flashed strength in taking on blockers in the drills I watched. Anthony Rashad White is set at one tackle slot. He is a massive man. I was impressed with his size and how well he moved. He?s a true playmaker who can get a push into the backfield.

But the position opposite him may be open. Converted end Tyler Hoover has bulked up and slid inside. Vanderbilt transfer James Kittredge had his moments when I watched him. Both are lunch pail guys. The guy to watch is Micajah Reynolds, who ran with the first team today. He is a big man and quintessential space eater for a team looking to replace Jerel Worthy on the interior.

I talked to Reynolds after practice and he is motivated to excel after flipping between offense and defense. The staff has nice depth, as this program continues to evolve. Redshirt freshman end Shilique Calhoun is a pass rusher deluxe who is fast off the edge, and a future star. Joel Heath is another redshirt freshman with a big future. And redshirt freshman Lawrence Thomas is another monster.

Getting the picture? This team is big.

This is an excellent group of linebackers, with all three starters back. In fact, it?s the best in the league. I am amazed at how well these guys run. Denicos Allen is lightning quick off the edge. Max Bullough is a bull in the middle, a true anchor who emoted leadership on this day in practice. The guy I?m amazed who doesn?t get more attention is Chris Norman. He?s a steady force who plays the ?Star? linebacker spot. He showed me the athletic ability and quickness to work in space, while also displaying power in taking on blockers. Norman should get more notoriety. The depth at linebacker is impressive with redshirt freshman Darien Harris, TyQuan Hammock, Ed Davis, Taiwan Jones, Steve Gardiner-they all can run and hit. This is a testament to the recruiting acumen of this staff. Many of these reserves could start on other Big Ten teams. Just lots of fast athletes who can run.

I have seen some nice cornerback tandems. And Michigan State?s duo of Johnny Adams and Darqueze Dennard looks like one of the top secondaries in the nation. The only Big Ten secondary on par with this one is Ohio State?s. Isaiah Lewis may be the top strong safety in the Big Ten. At 5-10 (if that), he?s not the biggest safety, but he covers a lot of ground and he can hit. On this day, he was a heat-seeking missile. The free safety spot is one of the areas to watch on this defense, as it remains unsettled. Kurtis Drummond, redshirt freshman R.J. Williamson and Jarius Jones are competing. True freshman Demetrious Cox also is in the mix to replace Trenton Robinson. Jones is having a terrific camp and is the current leader. He looks good after overcoming an Achilles tendon injury in the spring of 2011 that kept him out most of last season.

BTN bus has pulled out of East Lansing! You have a mighty fine team, #Spartans!! Maybe we will see you in Indy! #B1G pic.twitter.com/PtfnNBJC