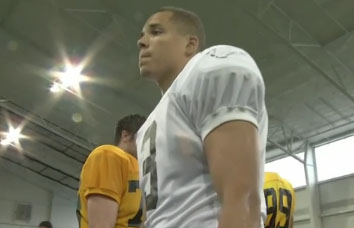 Iowa announced Tuesday afternoon that freshman running back Barkley Hill, in addition to freshman defensive back Ruben Lile, will miss the 2012 season due to a season-ending knee injury. Hill tore his ACL in a scrimmage Saturday, and the injury greatly affects Iowa. The true freshman was expected to play a big role in Iowa's depleted and often-joked-about cursed backfield.

And, for what it's worth, BTN analysts Gerry DiNardo and Howard Griffith were pretty high on Hill following our summer bus tour stop in Iowa. DiNardo picked the freshman as his "Newcomer of the Year," saying: "Based on today's practice, I thought he had a really good workout." Hear DiNardo talk about Hill at the 1:35 mark of this video:

And here's what BTN.com senior writer Tom Dienhart wrote about Hill in his Iowa practice recap:

"Freshmen Greg Garmon and Barkley Hill also looked good. Each is of similar build, with both being longer, lithe runners who have a burst. And each youngster looked good in pass protection drills, getting good bases and taking on hard-charging linebackers."

Look, this is team whose leading returning rusher is its quarterback, James Vandenberg, who ran for a grand total of 61 yards last season. The transfers of Marcus Coker and Mika'il McCall, coupled with Jordan Canzeri's torn ACL in spring practice and De'Andre Johnson's dismissal, leave Iowa's backfield as inexperienced and unproven as any unit in the Big Ten this season.

Now, it's down to sophomore Damon Bullock and the aforementioned Garmon. The good news: According to the Iowa press release, both Hill and Lile will use a redshirt, meaning they'll have four years of eligibility remaining.