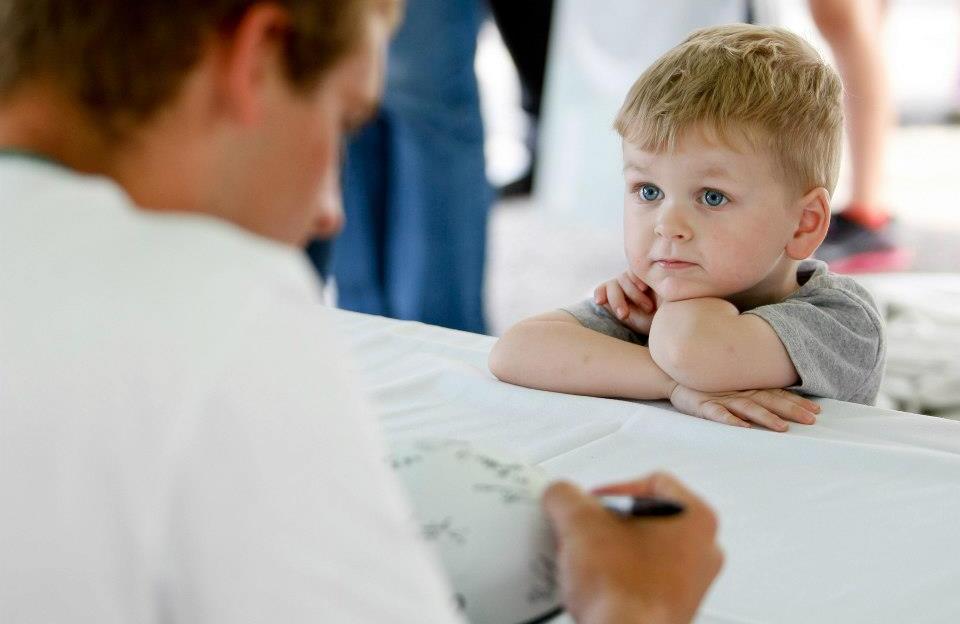 Another week before the college football season kicks off is in the books. Now, it's less than two weeks before Minnesota travels to UNLV for the Big Ten's first game Thursday, Aug. 30. What happened in the last week? Check out BTN.com's top 10 stories from the week that was in this post.

10. Celebrating 5 years: Top 5 wide receivers of BTN era
Believe it or not, BTN will celebrate its fifth anniversary later this month. As a way to celebrate - not to mention kill time before the 2012 season kicks off - I?m spotlighting some of the great football careers during our time on the air. My first list ranks the top five wide receivers of the last five seasons, aka the BTN era.

9. Did You See This? Young Spartan fan eyes hero
Big Ten football players probably think the autograph requests can get a little out of hand at times. Should they feel this way, they need to take a look at a photo taken Tuesday at the 10th annual ?Meet the Spartans.? The Michigan State Athletics Facebook page posted a photo gallery from Tuesday?s event, and one of the pictures features a young Michigan State fan looking on in awe as his football is signed. See the picture in this post and view the entire gallery.

8. Iowa to experiment with new Riddell 360 Helmet in 2012
There?s no such thing as too much safety when it comes to football helmets. Helmet manufacturers work tirelessly on developing the latest technologies to prevent concussions and all forms of head trauma, and Riddell?s newest helmet, The Riddell 360, might be the best yet. One Big Ten team, Iowa, already has invested in the state-of-the-art lid that received a 5-star rating in Virginia Tech?s latest helmet protection study.

7. Dienhart: My thoughts from Wisconsin practice
The BTN Tour bus made its way to Madison on Monday to watch Wisconsin, the back-to-back reigning Big Ten champ. While watching practice, offensive coordinator Matt Canada told me he?s happy with what he has installed thus far, as camp is about to hit full stride. I couldn?t help but to focus on what has to be one of the most closely watched signal-caller battles in camp across the nation. Canada says it?s a three-man derby between Danny O?Brien, Curt Phillips and Joel Stave.

6. Celebrating 5 years: Top 5 QBs of BTN era
BTN will celebrate its fifth anniversary later this month. As a way to celebrate - not to mention kill time before the 2012 season kicks off - I?m spotlighting some of the great football careers during our time on the air. My fourth list ranks the top five quarterbacks of the last five seasons, aka the BTN era.

5. Dienhart: What I learned at Purdue practice
There was a lot to watch at Purdue?s practice Wednesdat as Danny Hope prepares his fourth Boilermaker squad. It was a warm, sunny day in West Lafayette, testing everyone?s resolve.

4. Bret Bielema tweets Danny O'Brien Week 1 starter
Thanks to Twitter, we now know who Wisconsin?s starting quarterback is. Bret Bielema hit the social media site Sunday night to announce Danny O?Brien as his Week 1 starter. The tweet read: ?Also had so many questions about our QB situation that want everyone to know we are going to start Danny O?Brien in our opener against UNI.?

3. Dienhart: Meyer, Ohio State shaping up to be tough
There were many things to watch at Ohio State today in what was as physical a practice as I have seen on our trip. The practice-ending scrimmage had the intensity of a game and featured a lot of hitting. I spent a lot of my attention focused on an offense since in 2011 Ohio State had the worst passing numbers in the Big Ten. Now, Urban Meyer has installed a spread scheme for a team that opened at No. 18 in the AP poll on Saturday.

2. Celebrating 5 years: Top 5 running backs of BTN era
It?s been a fast handful of years, and on Aug. 30, BTN will officially celebrate its fifth anniversary. To celebrate - not to mention kill time before the season kicks off - I?m spotlighting some of the great football careers during our existence. My second list ranks the top five running backs of the last five seasons, aka the BTN era.

1. Dienhart: My impressions from Indiana practice
There is a lot going on at Indiana as Kevin Wilson embarks on his second season in Bloomington coming off a one-win debut. The quarterbacks had their moments, with Tre Roberson running with the first team. His arm is solid and it looks like his touch has improved. He remains a dangerous runner. Cam Coffman also looked good at times. He has a decent body and strong arm. He also showed good feet.