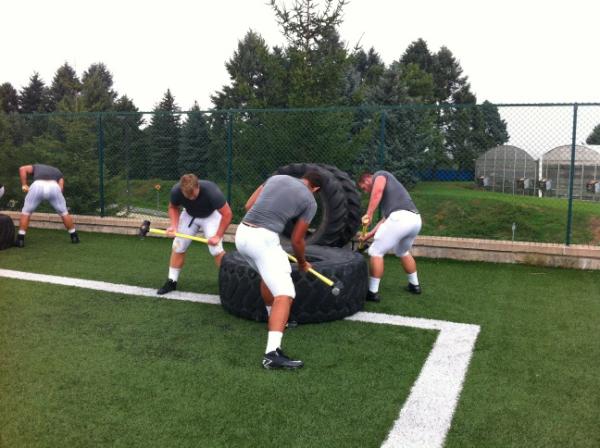 I didn?t really know what to expect at Penn State practice today, but I came away with the spirit and energy. And the team has some talent.

Bill O?Brien has said he wants to run a pro-style offense. Can quarterback Matt McGloin execute it? He had his moments but lacks a live arm and still can make dubious decisions. Paul Jones ran the second team and will see action this year, according to O?Brien. He is a massive quarterback who is pushing 260 pounds and can throw the ball 80 yards. Penn State can win with McGloin. But Jones has to play ?

With Silas Redd off the USC, the staff has turned to Bill Belton to run the ball. He was recruited as an athlete and was a prolific running quarterback in high school. He showed good quickness and elusiveness today. I like him. Depth? It?s iffy. The staff likes Zach Zwinak; he had his moments. He was a top fullback recruit in high school. Walk-on Derek Day and big Curtis Dukes also are in the mix. But the one to watch is true freshman Akeel Lynch. O?Brien told me before practice that Lynch could be the No. 2 tailback in short order. Kid is put together and runs hard. I love him.

Justin Brown?s departure for Oklahoma hurt the wideout corps. Without a doubt, Allen Robinson is the top target. He is a big target who looked good coming in and out of cuts. Shawney Kersey looks like another viable option. But who else is there to spread the field like O?Brien will often want to do? Evan Lewis is fun to watch. He works from the slot and is built like Wes Welker, who is a top New England Patriots receiver. The funny thing about Lewis: He is a former walk-on kicker. In fact, he was the team?s kicker early last year before losing the job. He then almost quit the team last spring before O?Brien talked him into staying. Keep an eye on true freshmen Eugene Lewis, Malik Golden and Trevor Williams.

I love these tight ends, led by massive Garry Gilliam. He missed almost two years dealing with a knee issue but is back and looking good. He dressed today but did little, as he had ice on his left knee. Jesse James, a freshman who enrolled early, and Kyle Carter, another freshman, also will figure in. Each brings nice athletic ability. We all know how O?Brien loved to use tight ends with the Patriots. Expect that to continue in State College, as he has some weapons to use.

The offensive line has some potential after getting manhandled in recent seasons by the defensive line in practices. A key guy is redshirt freshman left tackle Donovan Smith, but he has been dealing with a hamstring injury. Smith was out there today and looked good. Line coach Mac McWhorter thinks Smith could develop into a special talent.

Mike Farrell and Adam Gress also are in the mix at tackle. McWhorter thinks the strength of the group could be the interior with Miles Dieffenbach at left guard and Matt Stankiewitch-who has gotten bigger-at center. Keep an eye on right guard John Urschel, a smart and strong player who O?Brien thinks can be an NFL player.

These guys need to get a push to help a ground game that must produce so too much pressure isn?t put on the Nittany Lions? green passing game. McWhorter also told me he has guys practicing at multiple spots in case injury strikes; players then can be moved without causing too much distress.

The front seven on defense is a strength. End Pete Massaro looks good coming off a knee injury (his second). The opposite end is Sean Stanley, who flashed great speed off the edge today. Jordan Hill is a force inside at tackle playing alongside DaQuan Jones, a 320-pound wide-body. But depth isn?t terrific. In fact, coordinator Ted Roof told me he has to be careful how he practices his troops for fear of sustaining injuries.

The linebackers looked good and are the strength of the defense, I think. Gerald Hodges is a hammer at one spot. He told me after practice that he likes the philosophy of Roof, who will be aggressive and call blitzes. Michael Mauti is coming off another knee injury but looked good when I watched him in drills. He is a real heart-and-soul guy who I would follow into a burning building. You would, too, if you met him. Glenn Carson is a 235-pound force in the middle. True freshman Nyeem Wartman caught my eye a few times. There aren?t many Big Ten linebacking corps better than this.

The secondary is thin as it breaks in four new starters. To help, Roof told me he will bring lots of pressure so the defensive backs won?t have to cover for extended stretches. Without a doubt, cornerback Adrian Amos is one of the best of the bunch. You don?t have to watch him long to figure that out. Stephon Morris is another good corner who the coaches can count on. But instability at safety may force Amos to play there. If that happens, Penn State likely will have to play a true freshman like Jordan Lucas or Da?Quan Davis opposite Morris. Malcolm Willis (ankle) and Jacob Fagnano (hamstring) are the likely safeties but are dealing with injury. Willis wasn?t dressed out today.

With Anthony Fera off to Texas as a transfer, the kicking and punting are interesting. Sam Ficken showed a nice leg as a kicker. O?Brien hasn?t been pleased with the punting. Alex Butterworth and walk-on Matt Marcincin are battling. Stay tuned.

I talked to jack-hammer fullback Michael Zordich about the new weight lifting program. He says he has gotten bigger and stronger on the revamped system. New strength coach Craig Fitzgerald has jettisoned all machines from the complex and swapped in free weights. Zordich told me before, they did a lot of high-rep, high-intensity workouts on machines. Now, they do explosive, football-specific movements. This team looked good on the field and should benefit from the new program installed by the high-energy Fitzgerald.