Did You See This? Brock Mealer to walk down aisle 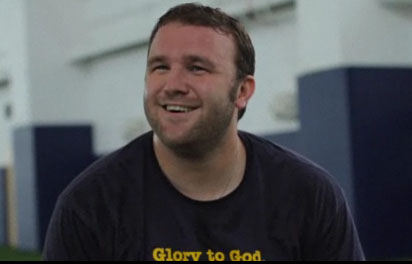 Brock Mealer, the brother of Michigan fifth-year senior Elliot Mealer, almost lost his life in the fatal car crash that took the lives of his father and his brother's girlfriend on Christmas Eve 2007. Nearly five years to the day, on Dec. 22, 2012, Mealer, who was left paralyzed from the waist down in the accident, will get married. Here's the best part: Mealer will walk down the aisle ahead his bride, Haley Frank, and he'll do it walking unassisted, according to @stephenjnesbitt. Not bad for a guy who was given a one percent chance to walk again.

[MichiganDaily.com: Brock Mealer's next step: Walking down the aisle]

Mealer is no stranger to taking steps in front of a bunch of eyeballs. After all, he led the Wolverines onto the field prior to the 2010 season opener – a scene that provided more than its share of emotion. Watch our feature on Mealer leading Michigan onto the field above.

Expect more of the same from Mealer in four months. This figures to be an even more powerful scene than the one at the Big House two years ago, if that's possible.

The producer of our feature talks about Mealer: