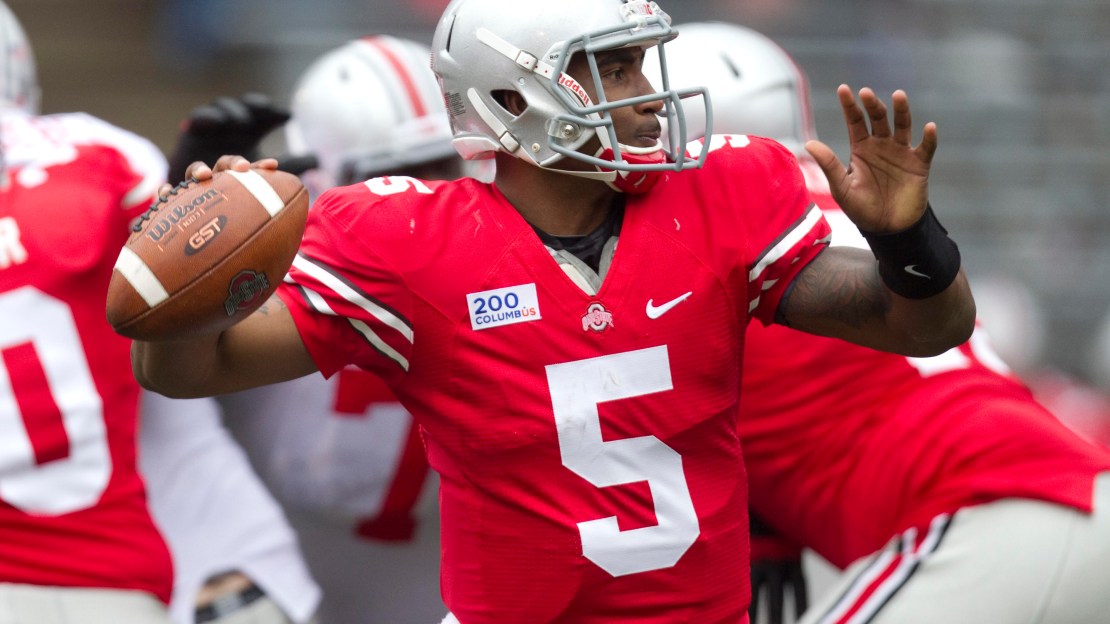 Throughout the seasons, I answer your Big Ten football and basketball questions in my Big Ten Mailbag. During the BTN summer bus tour, I?m fielding questions along our 3,000-plus mile trek across Big Ten country. We saw Ohio State practice Saturday (recap), and excited Buckeye fans sent me their questions. Read all of my answers to your latest Big Ten questions in this post. If you have a question, send it to me in the box at the bottom of this post or tweet it to me (@BTNTomDienhart). We're at Penn State practice Monday (preview).

Does it look like a lot of freshmen will be playing for Ohio State? – Steve Basinger

I think you will see a few, based on what saw in practice over the weekend. The four freshmen defensive linemen will see action-and likely lots of it. I?m talking about Adolphus Washington, Se?Von Pittman, Tommy Schutt and Noah Spence, who may be the best of the bunch. Others I expect to see are receiver Michael Thomas, tight end Nick Vannett, offensive tackle Taylor Decker and linebackers Camren Williams and Connor Crowell. Decker is a special player who could win the right tackle spot. There is lots of good, young talent on this team.

How involved will the tight ends be in Ohio State?s new scheme? – Michael

They will be a big part of this attack. Remember, Urban Meyer liked to use tight ends at Florida, where he developed Aaron Hernandez. From the practice I watched, the Buckeyes were making good use of Jeff Heuerman and Nick Vannett, a freshman who looks primed for a nice career. Look for these guys to be weapons on third downs to move the chains and in the red zone. Their development made it easier for the staff to move Jake Stoneburner from tight end to receiver in camp.

[BTN.com: Read all of our football tour coverage | Watch the video]

Are there any issues with Ohio State?s kicker or punter? – Bob Galpin

No. Ben Buchanan is slated to punt, and Drew Basil is back at kicker. All looks good in those departments.

If Ohio State was ineligible for the Big Ten title and a bowl this year, would you project the Buckeyes to win the Leaders? And which bowl would you pick them to go to? – Evan Snow

I have said often that I think this is the most talented team in the Big Ten. And I think the Buckeyes are headed for a nine- or 10-win season. And, in my mind, that would be good enough to win the Leaders Division. So, yes, I would predict Ohio State to win the Leaders. They may even be good enough to win the Big Ten title game, where they likely would meet Michigan or Michigan State. As for a bowl, I think a 10-win Buckeye team would have had a great chance for an at-large BCS bowl spot.

What do you think of the Ohio State receivers? – Cedric Taylor

I don?t know if there is a star in the group, but there are many good options that I saw in practice over the weekend. Offensive coordinator Tom Herman told me that Corey Brown has looked the best of the receivers in camp. Devin Smith also has looked good. Michael Thomas is a true freshman who was a star in the spring. He could be a contributor in 2012. Chris Fields is a steady veteran. Jake Stoneburner was moved from tight end to bolster the talent. He is a big target and mismatch waiting to happen.

Where do you think Purdue will finish in the Leaders Division? And will the Boilers go to a bowl? – Dr. Elliott Rennhack

The Boilermakers may be a dark horse in a Leaders Division that will have Ohio State and Penn State ineligible for the division crown. I love the defense, especially the line and secondary. The offense will hold the key for Purdue?s hopes of crashing the Big Ten title game party in Indianapolis. If the three-quarterback system works out, the line gels and more explosive plays are generated, the Boilermakers may give Wisconsin a serious run in the Leaders. At the least, this is a bowl team that could finish in the upper half of the division and perhaps secure a nice bowl in Florida.

I think Illinois has a nice collection of tight ends. Do you think Tim Beckman and his new staff can take advantage of that talent? – Rich Zollinger

No doubt, it will be one of the stronger positions on the team and will be utilized often in the new spread scheme he has brought to Champaign. I think Jon Davis is in store for a big season and may catch over 40 passes. Look for him to be split out from time to time in the slot. Eddie Viliunas is a player the staff likes a lot. He has terrific hands. Evan Wilson is back and figures to be more of an in-line blocker. Matt LaCosse also will play a big role. He is a rangy target who can split out.

Purdue is playing Eastern Kentucky in its first game. I would like to see more Big Ten schools play better foes in the non-conference. Why doesn?t that happen? – Steve Lyman

Schools can?t have four non-conference games vs. marquee BCS foes. They need to ease into the conference season by playing some ?lesser? programs. Remember, unlike the NFL, the colleges have no preseason games. They all count. There is no chance to work out the kinks, so to speak. The early-season games from FCS schools and less BCS opponents allow Big Ten teams to get their operations smoothed out and then to make adjustments before league season starts.

Do you think the coaching staff shakeup will pay off for Iowa this season? – Ed Crawford

I think you?ll see the offense look more different than the defense. Kirk Ferentz hired Greg Davis to run the offense. He used to push the buttons on the Texas attack before sitting out last season. Look for more of a passing element from Davis, who also is famous for developing good quarterbacks. This figures to be a more balanced and dynamic Hawkeye offense that will have multi looks and formations. Phil Parker was promoted from secondary coach to defensive coordinator. He basically was raised by retired coordinator Norm Parker (no relation), so don?t expect this Iowa defense to look radically different. There may be more press coverage and overall aggressiveness from an attacking/blitzing standpoint, but this defense should look largely the same overall.