Dienhart: Meyer, Ohio State Shaping Up To Be Tough 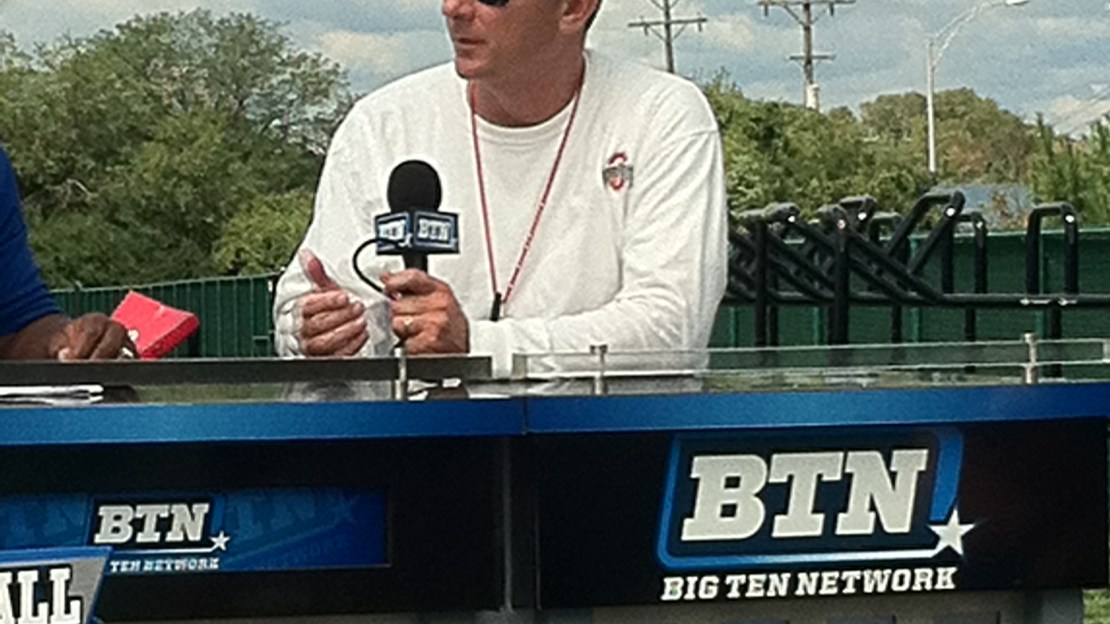 There were many things to watch at Ohio State today in what was as physical a practice as I have seen on our trip. The practice-ending scrimmage had the intensity of a game and featured a lot of hitting. I spent a lot of my attention focused on an offense since in 2011 Ohio State had the worst passing numbers in the Big Ten. Now, Urban Meyer has installed a spread scheme for a team that opened at No. 18 in the AP poll on Saturday.

How will it work? We'll cover that and more when our Ohio State Preview Show on this Big Ten Football Preview Tour airs Sunday at 10 p.m. ET. But let me tell you what I saw Saturday. Shoot me your questions as I'm answering the best ones from the BTN bus as we head to our final three schools of the tour.

This always is a good-looking team ?getting off the bus.? But even more so this year. The bodies all looked good, with few bellies hanging over the belt. Renowned strength coach Mickey Marotti and I talked after practice about conditioning and he told me how hiring a nutritionist has made a difference in how the team looks. (Jim Tressel never had a nutritionist on staff.) Meyer's quick tempo on offense requires players to be in shape, and that was evident today.

Quarterback Braxton Miller looks to have a good grasp of the spread scheme. He showed a nice touch on the short passes that are so vital to hit in this offense. He also showed his classic escapability. Some staffers felt this was one of Miller?s best practices of camp. In short, he is light years better than he was in 2011 as a true freshman.

With Jordan Hall out-he was in full pads with a boot on a foot-it was important to watch the running backs. Carlos Hyde figures to carry the load in the interim. He?s a big back with decent straight-line speed. Freshman Bri?onte Dunn is a speed demon. Rod Smith is another big back who can move the pile. Freshman Warren Ball is another back over 6-0 and 200 pounds in what is a huge backfield.

The receiving corps has been maligned since the spring. Who is going to step up? Players were in and out all practice. Corey Brown looked good. Offensive coordinator Tom Herman told me before practice that he has looked the best of the receivers in camp. Devin Smith also had his moment. Michael Thomas is a true freshman sensation and spring star who showed me he could be a contributor this fall, but he was running with the second team. Chris Fields is a steady veteran. Jake Stoneburner was moved from tight end not long ago and looks like he will be a matchup nightmare working out of the slot. The tight ends also showed me something. Jeff Heuerman and Nick Vannett each can move and showed good hands at times. Herman likes the athletic ability of each guy.

The offensive line was reworked at the start of spring and started to take shape late in the spring. The spot to watch is right tackle, with converted tight end Reid Fragel battling true freshman Taylor Decker. Fragel ran with the first team today. But offensive line coach Ed Warinner says the battle will rage on and each figures to play. The left side looks set, with Jack Mewhort at tackle and Andrew Norwell at guard. Corey Linsley is set at center, with Marcus Hall at right guard.

If there is a better defensive line in the nation, I?d like to see it. Depth abounds. John Simon is a relentless end who never stops working. Tackle Johnathan Hankins is the quintessential tackle. He has lost weight but still is explosive, strong and hard to root out of the middle. The guy is a first-round NFL pick. Redshirt freshman Chris Carter was on the second team and could be a guy to watch. At 6-4, 340, the former offensive lineman is huge and can move.

The four true freshmen are impressive and were running with the second team. End Noah Spence is a dynamic speed rusher off the edge and looks to be the best of the bunch. He had a couple sacks in the scrimmage and was generally difficult to block. Adolphus Washington has bulked up and moved inside. Se?Von Pittman and Tommy Schutt also had their moments. Wait until we see these guys in a couple of seasons.

Linebacker is the biggest question on the team. I talked to coordinator Luke Fickell before practice and he said Ryan Shazier and Etienne Sabino are key guys on the outside. Shazier has added bulk coming off a strong freshman season. He was dressed in full pads but did little work. The key guy is Curtis Grant in the middle. He was a five-star recruit who just never picked up the defense last year and largely was relegated to special teams. He looked ready to play a big role today. Grant is a big linebacker who can move, has a nose for the ball and stays on his feet. I asked Fickell if any young linebackers have impressed, and he mentioned freshmen Camren Williams and Connor Crowell, who both ran well today.

The starting four in the secondary is outstanding. The corner tandem of Bradley Roby and Travis Howard is strong. Ditto the safety duo of C.J. Barnett and Christian Bryant, a hard-hitting pair. They each showed me a nose for the ball today. And Roby is every bit as fast as advertised.

This was as intense a group of assistants as I have seen on the tour, and this is Stop Nine. Cornerbacks coach Kerry Coombs and defensive line coach Mike Vrabel are especially, ahem, demonstrative. Defensive coordinator Luke Fickell also coaches with passion. And it?s difficult to not be impressed with offensive coordinator Tom Herman, who is a future head coach. Great staff here in Columbus.