Web Links: No bible classes for Urban Meyer, after all 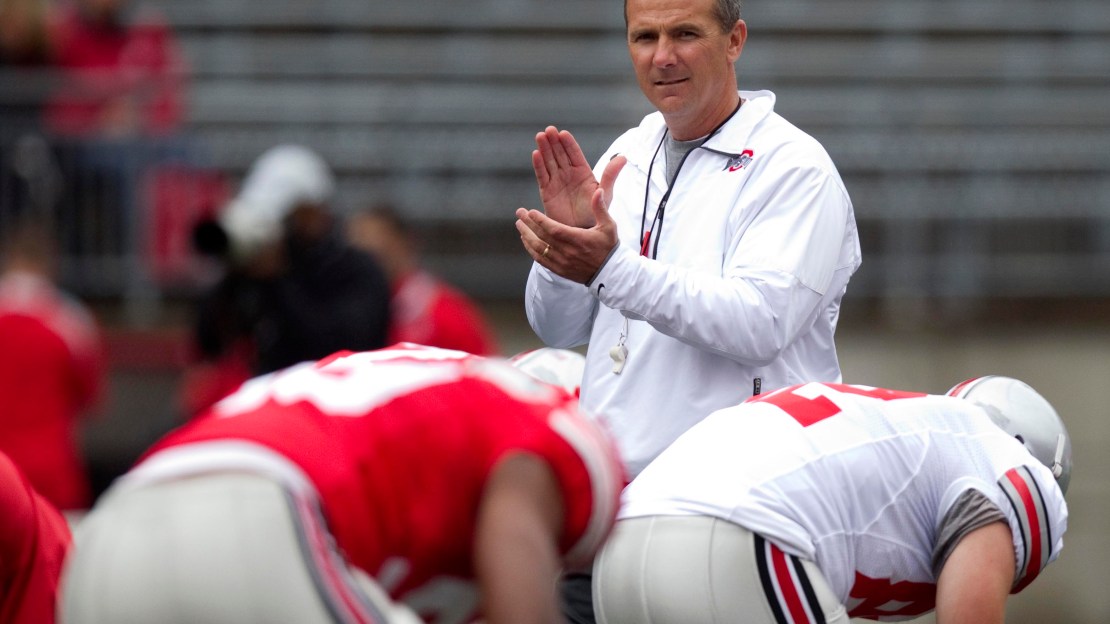 I?m still on the road with the Big Ten Football Preview Tour, and we?ll be taking in Illinois practice today. At 10 p.m. ET tonight, catch our Indiana Preview Show.  Read all my coverage from the tour here. I?m also providing updates and photos via Twitter. Don?t forget to check out my colleagues @BTNDaveRevsine, @GerryDiNardo, and @HowardGriffith, too. Now, let?s get to my Friday links.

JC HELP: Watching Minnesota practice last week, I couldn?t help but be impressed by the junior college transfers. But how many will really have an impact in the fall?

Marcus Fuller of the St. Paul Pioneer-Press thinks running back James Gillum and wideout Isaac Fruechte have the best chances. But don?t count out cornerbacks Martez Shabazz, Brien Boddy and Jeremy Baltazar. Those guys are athletic and skilled enough to play big roles in 2012.

RELISHING LOW EXPECTATIONS: A chip-on-the-shoulder mentality may be back at Iowa. And that?s a good thing.

Middle linebacker James Morris epitomizes the new mind-set of a program that is looking for a breakthrough in the tough Legends Division. More good news: When little is expected of Kirk Feretnz?s Iowa teams, they usually do well.

LOOKING FOR RECEIVERS: There are many challenges facing Penn State this season. One of the biggest will come finding a solid set of receivers with Justin Brown (Oklahoma) and Devon Smith (Marshall) each transferring.

Allen Robinson looks like one option. The others? Shawney Kersey, Christian Kuntz and Evan Lewis. Now, quarterback Matt McGloin has to deliver the ball for an aerial attack that may have room to work with defenses likely keying on the ground game.

PROGRESS WILL BE MADE: Check out this video of Phil Miller of the Minneapolis Star-Tribune, who thinks Year Two of the Jerry Kill regime will mean progress for the Gophers. I think Miller is correct, and history is on Kill?s side.

CHANGE OF PLANS: It turns out Ohio State coach Urban Meyer won?t be able to offer those Bible classes.

School president Gordon Gee has put the kibosh on the idea after a group that supports the separation of church and state contacted the school.

READY TO ROLL: With a veteran offensive line and a quarterback in Andrew Maxwell who has been in the system for three years, Michigan State coordinator Dan Roushar has installed a lot of offense already.

That could make for a more complex and diverse attack that may have a chance to be as strong as last season?s unit that ranked third in the Big Ten in scoring with a 31.0-point average.

ALABAMA APPROACH: Did you hear what Alabama defensive end Damion Square said about Denard Robinson, the Tide?s foe in the season opener? Square said of Robinson: ?That?s what we?re coming to stop.?

No doubt, stopping Robinson will be the goal of a Crimson Tide defense that probably will be the best the Wolverines? face all season in that Titanic season opener in Arlington, Texas, on Sept. 1. But saying it and doing it are two totally different things. For Michigan, if D-Rod doesn?t have a good game, it has little chance of toppling the Tide.

BIG SHOES TO FILL: What does new Michigan center Ricky Barnum have to do in 2012? Replace Rimington Award-winning center David Molk. That?s all.

Barnum moved from left guard to fill the massive hole. And, so far, so good. But his move has created a hole that Joey Burzynski, Elliott Mealer and Kyle Kalis are battling for. I can?t wait to see if true freshman Kalis wins the job.

HALL'S REPLACEMENT: With Jordan Hall out, Ohio State is in need of a replacement for the H-back role. Could that guy be wideout Corey Brown?

It?s not known if Brown could run the ball inside and outside-while also being a good receiver. But he certainly has the athletic ability to get the job done.

OK, I wasn't crazy about the adidas Wisconsin uniform for the Nebraska game … then I saw the Notre Dame uniform. Horrible. Just horrible.

My take: Yes, I think the Notre Dame uniforms set a new standard in garishness.

My take: This, ladies and gentlemen, is what they call being ?resourceful? and ?time efficient.? And I love it.

How close is center competition in #Huskers camp? Barney Cotton said he would consider using two centers in games.

My take: That may sound good in theory, but I don?t think it?s a good idea.

My take: You can listen to it over here at www.1070thefan.com or right below.