Web Links: Who's Ramping Up The Deuce Formation? 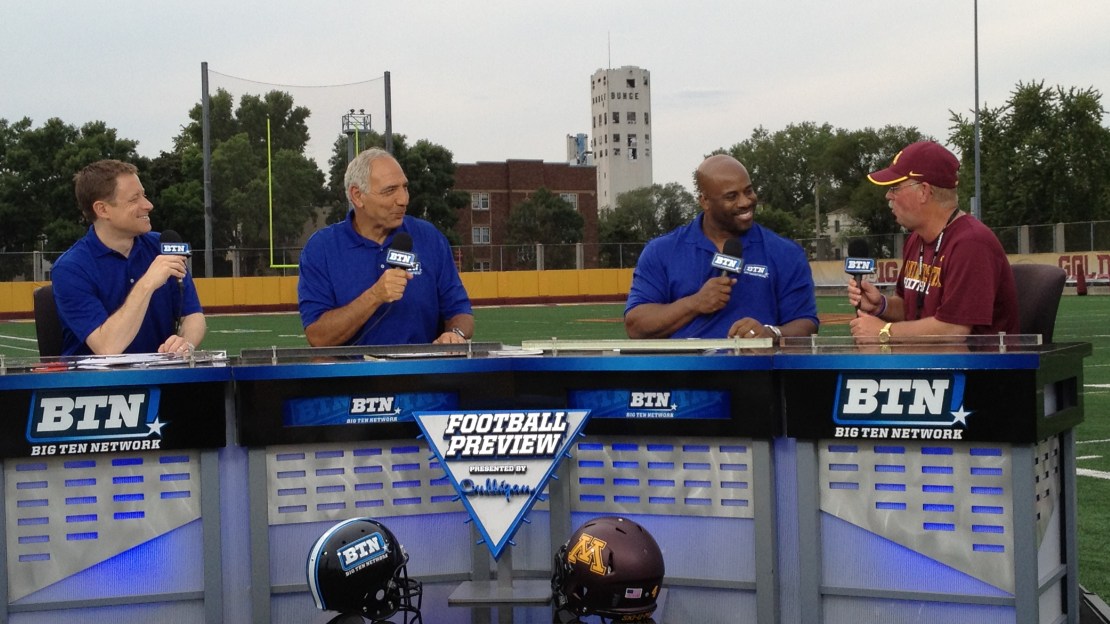 I'm still on the road with the Big Ten Football Preview Tour and we're in Indiana today. Tonight at 10 p.m. ET you can catch our preview show on Purdue. This tour is keeping me busy as I preview each stop and recap each practice – it's all over here. I'm also providing updates and photos via Twitter. Don't forget to check out my colleagues @BTNDaveRevsine, @GerryDiNardo, and @HowardGriffith, too. Now, let's get to my Thursday links.

Two-fer: Michigan used a ?deuce? formation that included Denard Robinson and Devin Gardner in concert from time to time last season. Expect more of that this season, according to this report on AnnArbor.com.

Why not? Wolverine OC Al Borges wants to get his best players on the field. And, without a doubt, Gardner is one of those. In fact, I wouldn?t be shocked if he plays a sizable role at receiver, given Michigan?s need at the position with Roy Roundtree out with injury at the moment.

Urban Meyer says his maligned pass catchers are improving, but still not up to Buckeye standards of Ted Ginn, Jr., Cris Carter, David Boston, Michael Jenkins, et al. He?s right, but I still like the potential of this group, especially freshman Michael Thomas. Devin Smith and Evan Spencer also teem with potential and possibilities. And, in time, I think these guys will be fine.

Top that: The Sports Illustrated preseason Top 25 is out. And, guess who is the highest ranked Big Ten team?

Corner market: Who?s the best cornerback in the Big Ten? It may be Michigan State?s Johnny Adams.

Adams contemplated leaving early for the NFL but opted to return to East Lansing. He has established himself as a top cover man who also is physical enough to play the run. And Adams also may be versatile enough to play some receiver if needed, as he showed in the spring game. Who knows? He may be needed with Aaron Burbridge-MSU?s top signee last February–out six weeks with a knee injury.

Trophy buzz: Michigan State?s Le?Veon Bell a Heisman dark horse? I like the sound of that. Montee Ball is good. So are Fitz Toussaint and Rex Burkhead. But, don?t sleep on Bell.

Up front: Wanna be a Nebraska offensive lineman? Enjoy the fanfare ? and criticism.

It comes with the territory. At this school, blockers are celebrities. But, if they don?t produce-and the recent lines have been spotty-the critics howl. It?s probably the only place where a 300-pound offensive tackle can feel like a quarterback.

The lesson: Beware Louisiana Tech. He?s serious. And he?s right. Sonny Dykes? Bulldogs are good. Speaking of Illinois, could end Michael Buchanan be the next great line of Illini pass rushers?I think so. I love the rangy 6-6 end coming off the edge. But how will he perform without Whitney Mercilus drawing attention on the other side?

Big Red: When I was at Wisconsin practice, I marveled at the space that right offensive tackle Rob Havenstein occupied. He is a mammoth man.

It?s difficult to believe he actually is smaller than when he arrived in Madison. Back then, he was over 380 pounds. Now, he is in the 340-range. And, Havenstein actually moves pretty well. He is gonna be special and gives the Badgers a nice tackle tandem playing opposite Ricky Wagner.

Q&A: The great Sid Hartman talks to Minnesota coach Jerry Kill. And Kill thinks the freshmen will help this fall.

I really like what I saw at Gopher practice last week from the youngsters. There are some nice athletes in the freshman class, especially receiver Jamel Harbison and defensive backs like Eric Murray and Damarius Thomas. I think Kill has things pointed up in the Twin Cities. This could be a dark horse team in the Legends.

Shhhh …:Kirk Ferentz?s Iowa teams often do they best work when they fly under the radar. And, make no mistake about it: The 2012 Hawkeyes are under the radar. Also, Iowa has a favorable schedule that could make for a fast start-perhaps a 5-0 start. If that happens ?

A few weeks later, Michigan was back on the cover — after Appalachian State beat the Wolverines.

My take: Michigan is on a regional cover this year. But, it doesn?t open vs. App State. So, the Wolverines have that going for them.

Watching replay of Gator Bowl, last OSU TD is example why Meyer and Co. high on Jordan Hall as hybrid back once he can play.

My take: The ?Percy Harvin? clone can?t get back soon enough from his foot injury. Hall is a nice fit for this new spread scheme.