Dienhart: My impressions from Indiana practice 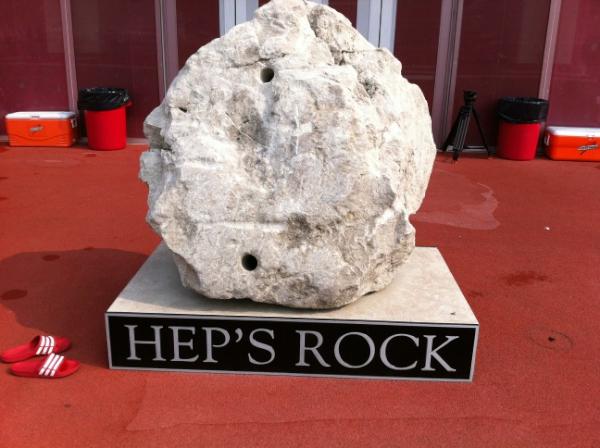 There is a lot going on at Indiana as Kevin Wilson embarks on his second season in Bloomington coming off a one-win debut. The quarterbacks had their moments, with Tre Roberson running with the first team. His arm is solid and it looks like his touch has improved. He remains a dangerous runner. Cam Coffman also looked good at times. He has a decent body and strong arm. He also showed good feet.

First-year offensive coordinator Seth Littrell stressed to me that he wants to be ?efficient? in the passing game, with a target completion percentage of 70 percent. That means a lot of shorter passes, but don?t expect Indiana to run the offense that Mike Leach ran at Texas Tech, where Littrell was an assistant. Rather, Littrell told me they will run the ball. And, he?s not hung up on passing/running a certain percentage of time. Instead, he said a target is to have a combined 60 rushes and completions each game. And the offense wants to involve everyone, with running backs playing a big role catching the ball.

The offensive line commanded a lot of my attention, as it probably is the one area of the offense that is most worrisome. Depth and experience are issues. Projected starting left tackle Charlie Chapman is out with a concussion. True freshman Jason Spriggs has stepped in. Coach Kevin Wilson loves Spriggs. Wilson said Chapman will resume No. 1 left tackle status upon his return, but Spriggs will play this year. He has a nice 6-7 frame. Once he fills out, he could be very good. True freshman guard Dan Feeney also was running with the No. 1 unit today and will see action for a roster that continues to be one of the youngest in the nation, with only eight seniors.

The running backs look good. Stephen Houston is a horse who looks primed for a big season. He can move the pile and looked fast in drills. Look for true freshman Tevin Coleman to play. He was one of the team?s top recruits last February. I was impressed with his size and quickness. Kevin Wilson told me he will play this season. Isaiah Roundtree is a transfer from Morehead State with some jets; and OC Seth Littrell told me if he had to start a back today, it would be Roundtree. DeAngelo Roberts is another speedster who lacks size but is tough. I wanted to see big Matt Perez, but he is hurt.

The receivers flashed some potential. The competition is fierce with vets like Duwyce Wilson, Kofi Hughes, Nick Stoner and Cody Latimer, who could be the best. He?s a big target and impressed me the most. Some freshmen caught my attention: Caleb Cornett, Kevin Davis and Ricky Jones. Littrell told me he really likes Davis and Jones. Each was getting plenty of reps today. Littrell says they are ?swimming? as they adapt. But, they could be good.

I love tight end Ted Bolser. He?s a rangy athlete who can run. And he?s motivated coming off a disappointing sophomore season that got off on the wrong foot because of injury, as he never got on track. But he looks good now. And, talking to him after practice (see video above), Bolser thinks he?ll play a big role in this offense.

The defensive tackles are vets who need to play better. Line coach Mark Hagen does a nice job teaching technique and fundamentals. He?s a passionate and smart coach who has some veteran talent to work with. Larry Black, Nick Sliger and Adam Replogle are big bodies vs. the run who are lunch-pail-type players.

I was told to watch the ends, who need better production. They really hold the key to the defense. Ends coach Jon Fabris is a good assistant who developed David Pollack at Georgia. Fabris has his work cut out for him in Bloomington. He has turned up the heat on his guys and needs to find some pass rushers. To a man, each defensive coach I talked to said Bobby Richardson needs to be that guy. And, he could be a force and looked strong at times coming off the edge today. Converted linebacker Zack Shaw also showed me something playing opposite Richardson.

The secondary has some veterans but needs to cut down on mistakes and big plays. Corner Lawrence Barnett may be the top cover man. Greg Heben also looked solid, but Kenny Mullen was away attending a funeral. Co-defensive coordinator Mike Ekeler says he?s the team?s top defensive back, a primo coverman with skills. The staff loves JC transfer Antonio Marshall. And safety Mark Murphy is coming off a strong freshman season. He flashed playmaking skills today and showed me underrated athletic ability. He also a sure tackler, one of the better ones on the team.

JC transfer Jacarri Alexander and David Cooper have injected a needed element of speed into the linebacking corps. That was apparent watching each in individual drills and scrimmage. Each is an explosive athlete. They also have brought some much-needed swagger to a defense that was dismal last season.