Dienhart: What I learned at Purdue practice 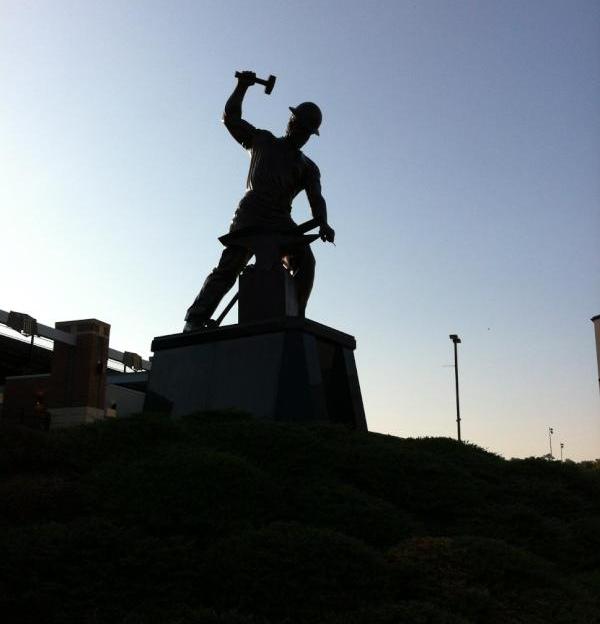 There was a lot to watch at Purdue?s practice Wednesdat as Danny Hope prepares his fourth Boilermaker squad. It was a warm, sunny day in West Lafayette, testing everyone?s resolve.

My eyes first went to the quarterback situation. Getting reps for three guys is tough. (Purdue had eight QBs dressed out.) The staff has sat out a quarterback from practice so the others could get reps. Robert Marve moved well, which was good to see after some of his previous health issues. Ditto for Rob Henry, who missed last season with a knee injury suffered in camp in 2011.

I think Caleb TerBush, last year?s starter, threw the ball the best. In fact, TerBush exuded confidence. Danny Hope says he has made big leaps in his presence and command. To that end, he has been elected a team captain. He could be in store for a big season.

Henry is a wild card who could be one of the most versatile players in the league. He figures to be the team?s Wildcat quarterback, while also likely lining up as a wideout and receiver. It could be interesting. Henry was moving well. OC Gary Nord told me they are taking it easy with Henry, not wanting tax his repaired knee.

I was eager to see the skill-position talent. Running back Ralph Bolden isn?t having contact as he recovers from another knee injury. He dressed for this practice but did little. Akeem Shavers and Akeem Hunt got the bulk of the work. Hunt is a diminutive back with some giddy-up, while Shavers is a little bit of a heavier hitter. Purdue also likes to get creative in the run game, getting touches for wideouts Raheem Mostert and Antavian Edison on jet sweeps to take advantage of their speed. The quarterbacks also showed they again will be part of the running game.

Whoever is under center will need some targets. In fact, Hope says this corps of receivers may be as fast as any in the Big Ten. Edison isn?t a big target, but he showed some veteran moves today. Mostert is a speedy option who caught my eye. And he is bigger than I thought.

The tight ends caught my eye, as this is a deep position at Purdue. Gabe Holmes is an impressive athlete whom coaches think could be on par with former Purdue tight end star Dustin Keller. Hope called him over for me to meet-and he passes the eyeball test. Holmes also made some nice grabs today. Freshman Carlos Carvajal is intriguing. He?s every bit of 6-7, but I?m not sure if he?s ready yet. A youngster who caught my eye was Danny Anthrop. The true freshman will help the team this year as a return-and he could work in at wideout. He is fast, smart, loves football and wants to be good. Remember the name.

An offensive line that lacks size and depth may be a concern. Kevin Pamphile never has played left tackle-but he?s the starter. Left guard Peters Drey has had back issues in the past. Right tackle Trevor Foy has battled shoulder issues. Justin Kitchens also will play some tackle but is coming off a shoulder injury. The right guard spot is up for grabs between JC transfer Devin Smith and Cody Davis. I think Smith will be the guy. The most sure thing may be center Rick Schmeig, who has a good, wide base. Hope told me he loves the athletic ability of this group.

[BTN.com: Read all of our tour coverage | Watch all the video]

I love this defense, which will be Hope?s best. There is lots of speed across the board for a unit on its third coordinator in four seasons with Tim Tibesar arriving from the CFL. And it begins up front. End Ryan Russell looked good coming off the edge. He also packs a punch. Jalani Phillips is opposite him. He never played end in high school but is a speedster off the edge. Depth looks shaky, which is why true freshman Ryan Watson may get on the field. He was Purdue?s top signee last February. He was running with the 2s today. He already has a big body.

Tackle Kawann Short didn?t disappoint me. He was difficult to block when I watched them. In one tackling drill, he rag-dolled a poor scout team player, showing explosive quickness. This may be one of the top tackle groups in the Big Ten this season with Bruce Gaston, Brandon Taylor, Ryan Isaac and young Michael Rouse.

Cornerback Ricardo Allen is small, but showed me cat-like quickness for what looks like a deep collection of corners. And he also has a knack for playing the ball in the air during 7-on-7 drills. Don?t sleep on fellow corner Josh Johnson, who staffers tell me is a legit NFL prospect. He?s bigger and more physical than Allen. Freshman Frankie Williams caught my eye as the nickel back. He lacks height but is quick. Normondo Harris is dealing with a hamstring but figures in the corner rotation somewhere.

Safety doesn?t look as settled as corner. Taylor Richards seems to have one slot sewn up. He lacks size but can run and showed me he can hit. The other safety spot is a battle. Max Charlot is a veteran but walk-on Landon Feichter is in the mix. Freshman Anthony Brown may be a guy to watch. He was with the 2s today.

The linebacking corps didn?t seem to have much depth. Dwayne Beckford is an anchor in the middle, but he?s still knocking off rust after being suspended for spring ball. Will Lucas looked speedy on the weak side. A guy who caught my eye was Robert Maci on the strong side. He was an end before this season but looks to be used in a hybrid fashion, moving from end to linebacker to allow the defense to morph between a three- and four-man front.

I made sure to watch the kickers, as Purdue is replacing Carson Wiggs and his cannon leg. Freshman Paul Griggs was booming it. But so was walk-on Sam McCartney.