Dienhart: My observations from NU practice 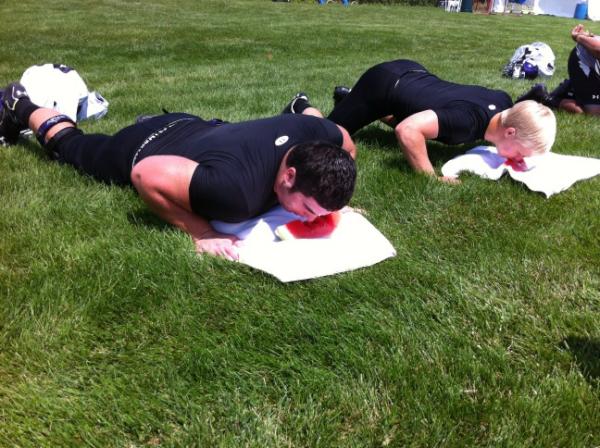 There was lots to watch today at Camp Kenosha, as Northwestern looks to answer some big questions on defense while searching for a running back, SuperBack and developing quarterback Kain Colter as a passer. One thing that stood out was how the speed and athletic ability of this roster has improved. Offensive coordinator Mick McCall told me the team has more speed than it ever has since he arrived in Evanston six seasons ago. And, he is correct. This is a Wildcat team that has some ability and can run.

I paid close attention to the running back situation. McCall has explained to me that it really doesn?t matter that Northwestern hasn?t had a 1,000-yard rusher since 2006, when Tyrell Sutton turned the trick. It only matters that the Wildcats have a productive overall rushing game. The NU ground game ranked seventh in the Big Ten last season. But, McCall told me he views a short pass to a back the same as a run.

Venric Mark has been one of the biggest surprises of camp and could end up winning the running back job. The diminutive (5-8, 170) Mark was switched from receiver during bowl practices. He flashed lightning quickness today. Mike Trumpy was Mike Trumpy when I watched him: A workmanlike back. And he is healthy after ACL surgery kept him out of spring ball. Tyris Jones is another thumper. I wanted to see more of true freshman Malin Jones, but he has been dinged up with a shoulder issue. But, bottom line, I still wonder how productive this collection of backs will be.

The offensive line looks like it has potential. I especially like the left side. Guard Brian Mulroe is the best of the bunch, but he didn?t practice today. Mammoth tackle Patrick Ward looked good. He played on the right side last season but looks to be a nice fit on the left side. Ward has nice feet. The coaches also like center Brandon Vitabile, who was a standout as a redshirt freshman last season. Vitabile looked to be in command when I watched him. He was quick off the ball, and has a thick, powerful build.

Colter remains a work in progress under center. He is throwing the ball with more confidence and a bit more zip. Still, standing next to Colter, he?s less than 6-0 tall.

It was fun to watch this group of receivers, which may be the best in the Big Ten. Tony Jones was out today, so I didn?t get to see him. Demetrius Fields is the steadiest of the bunch, a true veteran with good hands. Christian Jones is a big target who showed me an ability to get open over the middle. Rashard Lawrence had flashes. I really wanted to see USC transfer Kyle Prater, but he is dinged. He?s is every bit of 6-5 but has a thin build.

Superback is a big unknown, as there doesn?t appear to be any Drake Dunsmore on the roster. An eclectic mix of players is in the hunt, including former quarterback Evan Watkins, redshirt freshman Mark Szott, former linebacker Tim Riley and ex-offensive tackle Brian Smith. And there are others, as I saw as many as five players work at the position. If no adequate Superback can be found, don?t be shocked if McCall opts to use four and five wide-out sets.

The defense was a major issue in 2011, as communication issues often resulted in blown coverages and missed assignments. Coordinator Mike Hankwitz has told me they have simplified things to help. Redshirt freshman cornerback Nick VanHoose was impressive and could be a needed playmaker in a secondary that remains the biggest concern of the defense. Pat Fitzgerald told me he likes VanHoose?s explosive ability. And he has nice size. The other player in the secondary who stood out was safety Ibraheim Campbell, who is a star in the making. He?s an explosive player who showed me he can hit and cover. I asked Fitz if Campbell could leave campus as one of Northwestern?s best defenders ever. And he smiled and said he liked the sound of that.

[BTN.com: Get all of our football tour coverage | And video]

The other corner and safety spots are up for grabs. I liked the work of Demetrius Dugar. He was quick to the ball. There is a collection of players battling to play opposite Campbell, including Davion Fleming, Hunter Bates, Jimmy Hall and Jared Carpenter. Stay tuned.

Who will be some playmakers in the front seven? One could be true freshman Ifeadi Odenigbo, who was moved from linebacker to end. He could be a good situational pass rusher who is brought into the game on third downs. But I wouldn?t be shocked if he?s redshirted. Odenigbo already has an impressive body that figures to get bigger and better in time.

End Tyler Scott showed a burst off the edge when I watched him in drills. He's a big-bodied guy who needs to be a pass rushing force. Fitz told he really likes redshirt freshman Deonte Gibson, who has bulked up and remains quick off the edge. Chance Carter is an athletic sophomore tackle the coaches told me could be a playmaker on the interior. Brian Arnfelt showed flashes today at tackle along with Carter. He?s a big guy with strength and power. This defense can?t rank 10th in the Big Ten vs. the run again.

It was fun to watch the linebackers, a deep position that could be the best part of this defense. Last year, the staff moved David Nwabuisi from the middle to the outside and inserted Damien Proby in the middle. And the defense responded well. Each looked good today, showing veteran instincts. Fitz was sure to point out sophomore Chi Chi Ariquzo. He is a specimen who can run and hit.