Dienhart: My thoughts from Wisconsin practice 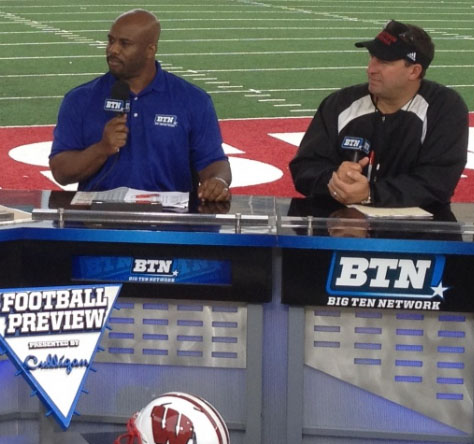 The BTN Tour bus made its way to Madison on Monday to watch Wisconsin, the back-to-back reigning Big Ten champ. While watching practice, offensive coordinator Matt Canada told me he?s happy with what he has installed thus far, as camp is about to hit full stride. I couldn?t help but to focus on what has to be one of the most closely watched signal-caller battles in camp across the nation. Canada says it?s a three-man derby between Danny O?Brien, Curt Phillips and Joel Stave.

And Canada also tells me that he?s in no hurry to make a decision. As he says: Often times a quick decision isn?t the best decision. Canada is focused on making the right decision. He says O?Brien brings great experience and smarts along with a veteran?s presence. He was the most consistent passer today. Phillips had his moments and is trying to regain some of the elusiveness he had prior to three knee injuries. Stave also looks to have picked up where he left off in the spring, when the walk-on had the reins of the offense. He looks the part and may have the strongest arm of the three. The ball pops off his hand. The reps were split pretty evenly between the three.

Talking to running backs coach Thomas Hammock before practice, he loves the depth he has to work with. James White is a proven talent, while Melvin Gordon is a promising redshirt freshman. Montee Ball was in pads today but didn?t have any contact, doing some seven-on-seven work and looking like, well, Montee Ball. He will be worked in slowly as he recovers from a concussion. But, if for some reason Ball needs more time, White and Gordon appear more than capable of carrying a big load.

Another position that occupied a lot of my time was receiver. Jared Abbrederis is a proven commodity and looked like a veteran when I watched him. But, there are myriad others battling for spots. And Canada likes it that way, as he told me the competition is making everyone better. Canada mentioned the likes of Jordan Fredrick, Manasseh Garner, Kenzel Doe and Chase Hammond as factors, along with Jeff Duckworth. (Hammond is dealing with a concussion.) And keep an eye on Reggie Love. The true freshman only played one year in high school and ?flew under the radar,? Bielema told me on the sideline. Love made some nice catches today. But Fredrick looked the best of youngsters today.

Wisconsin signed a small class in February, but it still could be an impactful group in 2012. But Canada said the one who is turning heads is offensive lineman Dan Voltz. Redshirt freshman wideout Jordan Fredrick also has impressed and Love is another, Canada told me.

Fullback is a key position in this offense. And the Badgers need one with Bradie Ewing off to the NFL. One of the candidates is Derek Watt, who is the younger brother of J.J. and recently was moved from linebacker. For now, Sherard Cadogan is running No. 1. But if no one emerges to claim the job, this offense can use two-tight end formations and run all of the same plays it executes with a fullback in the backfield. Bielema told me they have done it in the past.

Defensive coordinator Chris Ash told me he?s happy with the starting 11. The big mission of camp: developing depth. The tackle spot is the greatest concern, Ash says. The loss of Jordan Kohout has thinned the ranks on the interior. He had to give up football over the summer because of issues with migraines. And former tackle Kyle Costigan is now a guard on offense. Ash says sophomore Warren Herring is a youngster who has made a move in camp and is the No. 3 tackle right now. Herring arrived in Madison as an end before bulking up and sliding inside. Sophomore Bryce Gilbert also figures in the four-man rotation at this point.

Speaking of tackle Beau Allen is one true difference maker on the interior but has been out with an ankle issue. He will be fine, I am told. Co-defensive coordinator Charlie Partridge says he?s special. It was fun to watch Allen move. He?s so strong at the point of attack and has quickness that belies with 330-pound girth.

The linebacking corps has been humming along in camp. Mike Taylor has been banged up of late, but he will be good to go. Ash knows what he?s going to get from Taylor and Chris Borland on the inside. Ethan Armstrong will man the other outside slot. Ash told me that true freshman Vince Biegel has been a revelation in camp and has a shot to play a role in the fall. Biegel is big (6-3, 225), can run and has a motor. Ash told me: ?He can do some things for us.?

The defense has two key players coming back from injuries that ruined their 2011 seasons. Ash says end David Gilbert is a bit rusty but is moving well as he comes back from a foot injury that caused him to miss the final 10 games. Cornerback Devin Smith played the first two games before a foot injury ended his season. He is the team?s best corner, according to Ash. Smith looked good in coverage on several occasions, flashing speed and instincts while playing the ball in the air.

Ash told me he?s a bit worried about depth at safety. He loves Dezmen Southward (free) and Shelton Johnson (strong), but they will need help. To help solve the issue, Ash is moving freshman Darius Hillary from corner.

When you are at Wisconsin, you have to watch the offensive line. And this year?s group is replacing three starters. Per usual, this is a frighteningly large collection of men. Left tackle Ricky Wagner is a man who appears ready to live up the hype as the school?s next Outland winner. He was firing off the ball well today.

OC Matt Canada has liked Rob Havenstein at right tackle. He is a sun blocker and the biggest man I have seen on the tour to date. I asked every coach if the mammoth man could move. And they all said he can. I watched him pull once, and he showed good feet and balance. Ryan Groy is settling in at left guard. He looks like a classic mauling Badger blocker at 6-5, 322. Travis Frederick is back at center. He showed a real command up front as a leader when I watched him. The one position to watch is right guard. For now, Robert Burge is the starter, but he is being pushed.

Watch my interview with Chris Borland: