Dienhart: Things I learned at Minnesota 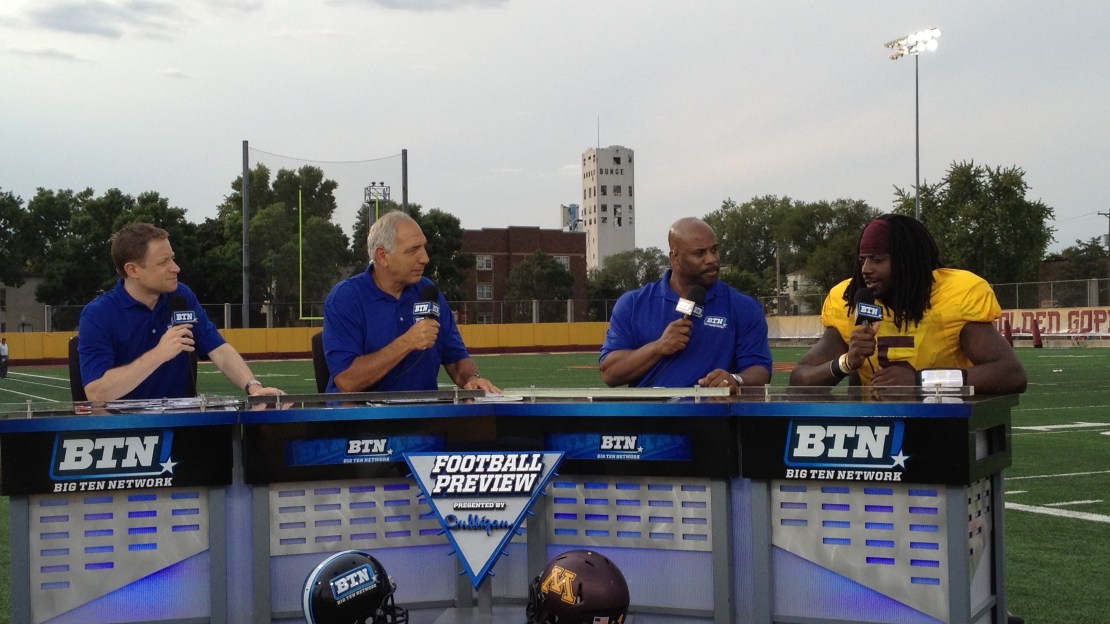 Anytime you watch Minnesota, you can?t help but focus on quarterback MarQueis Gray. At 6-4, 250 pounds, Gray looked like a linebacker or defensive end when I stood by him at practice. He?s a physical beast. But he also has made some great strides as a passer, which were apparent in the practice we watched. Quarterbacks coach Jim Zebrowski told me things are slowing down for Gray in his second season in the scheme. You could sense a maturity and confidence about Gray as he worked out. He?s older and wiser-and it showed today.

Offensive coordinator Matt Limegrover says some of the staff visited Baylor to glean ideas on how the Bears used 2011 Heisman Trophy winner Robert Griffin III. Receivers coach Pat Poore has some connections on Art Briles? staff that allowed the Gophers coaches to travel to Waco.

Talking to offensive coordinator Matt Limegrover, he thinks just having a year under the belt will help the staff and players with the attack. Last season, Limegrover felt he tried to feed the players too much, almost trying to continue where he and the staff left off at Northern Illinois. It was too much. So, this spring Limegrover stripped things down and got back to basics. And the offense is building on those fundamentals in camp.

[BTN.com: Watch all of our Minnesota Preview Show video]

?We are on the same page mentally,? Limegrover told me. ?They are getting it. We have a tempo to it. We are installing a lot. We are executing much better than we were last year at this time.?

The Golden Gophers may have one of most underrated collections of skill-position players in the league. The receiving corps is particularly intriguing. Diminutive (5-8) Marcus Jones is the glue that holds the receiving corps together. The sophomore is coming off a knee injury that ended his 2011 season prematurely. He looked good in and out of cuts from what I saw. And Limegrover describes him as a gym rat who loves to study film.

Bottom line: Jones could be electric. Senior Brandon Green is a leader. He looked good today in practice. But I was most excited about freshmen like Andre McDonald and Jamel Harbison. McDonald didn?t practice today because of injury, but Harbison looked good, flashing athletic ability, a needed element in this attack. At 6-2, 200 pounds, McDonald, in particular, looks like a legit Big Ten wideout. The local product could be special once back on the field. Harbison?s skills look polished beyond his years. He made several nice plays today.

Limegrover also is excited about his tight ends. Senior John Rabe gets most of the ink. He?s a big body who is physical at the point of attack while also possessing strong hands. But Limegrover says sophomore Drew Goodger is on the rise and one to watch. At 6-5, 255, Goodger is physical, moves well, is versatile and can block and catch.

I was told before arriving in the Twin Cities that JC running back James Gillum was a physical back with a burst. He didn?t disappoint on this day. Gillum can do a bit of everything, including holding up in pass protection, carrying out fakes and catching the ball out of the backfield. He just has an attention to detail that has impressed Limegrover. Gillum really was the lone healthy back in spring ball and took advantage of his reps. That in turn put pressure on holdovers like Donnell Kirkwood ( a savvy vet), David Cobb (a 220-pound hammer) and Devon Wright ( a speedster) in what is a deep crop of runners.

Speaking of runners, Limegrover loves freshman K..J. Maye, who was a high school quarterback. But Limegrover plans to use him at receiver and/or running back. Bottom line, Maye has to get onto the field to take advantage of his speed.

The line has come a long way, too. Limegrover told me today that last year, he felt comfortable with just three or four of the starters. Now, he thinks he has eight players he would feel comfortable starting. The competition in camp was great when I watched practice, with tackle Ed Olson showing some power off the edge. Limegrover says Ed Olson was too worried about being perfect last season, almost always asking for feedback after every play. Now, he?s more relaxed-and more consistently productive.

Limegrover wants to keep everyone dialed in and interested, as he thinks complacency set in on the line and many other positions last year. He likes to point to Caleb Bak, who at one point ranked as one of the bottom players on the roster. But Bak-a walk-on–was moved from defensive to offensive line and continued to work to the point where last year he ended up starting the final four games at guard as a redshirt freshman.

Defensive coordinator Tracy Claeys loves the young talent on his unit, one that teems with young, promising players. After practice, Claeys told me three true freshman defensive backs have impressed in camp: Antonio Johnson; Damarius Travis and Eric Murray. This is a secondary that could be good. Staffers also like JC transfer DBs Martez Shabazz and Briean Boddy. And corners Troy Stoudermire and Michael Carter bring a veteran presence. Another to keep an eye on is sophomore safety Derrick Wells.

Talking to veteran linebackers coach Bill Miller before practice, he was quick to point out Lamonte Edwards. The sophomore arrived on campus as a running back before switching to linebacker last spring. Now, Edwards is an impact player who Miller says loves to hit for a linebacking corps that has good depth in Brendan Beal, Mike Rallis and Keanon Cooper. And, in the end, Edwards may be the best of the bunch.