Football Tour: What We Learned At Iowa 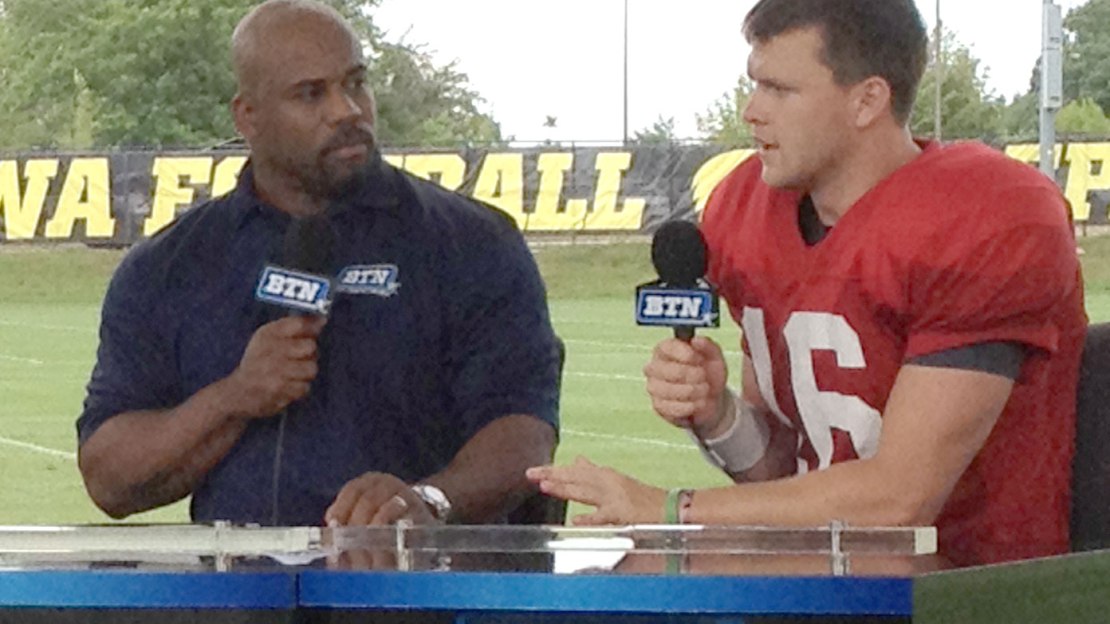 In the first stop on our 2012 Big Ten Football Preview Tour presented by Culligan, we stopped in Iowa City to watch the Iowa Hawkeyes practice on Wednesday. We'll be hitting every other campus in the coming weeks, too. See the full tour TV show schedule here.

The one-hour BTN show on the Hawkeyes airs Thursday night at 10 p.m. ET with Dave Revsine (@BTNDaveRevsine), Gerry DiNardo (@GerryDiNardo) and Howard Griffith (@HowardGriffith). They take a real deep look at Iowa on both sides of the ball. Drop me a note if you have any questions about Big Ten football. I'll be on that TV show, too.

Now let's get back to the Hawkeyes. I learned plenty on this trip, so let's go through the list.

Keep an eye on the offensive line. While most pundits are rightly focusing on the issues at running back, keep an eye on the guys up front. It could be good-and it must be good. The unit has only two seniors in center James Ferentz and guard Matt Tobin, but it still teems with potential. The tandem of sophomore left tackle Brandon Scherff and junior right tackle Brett Van Sloten could be special. Scherff could be the next great Iowa lineman, falling in line with Robert Gallery, Bryan Bulaga and Riley Reiff. Yes, he could be that good.

[BTN.com: Watch all of our Iowa Preview Show video]

Redshirt freshman Austin Blythe was running with the first team today at right guard. I was impressed with new offensive line coach Brian Ferentz, listening to him address his unit. He?s a fiery coach whose energy and knowledge will go a long way in making this a strong unit that must open big holes for the aforementioned unproven running back corps that will need some big holes to run through.

The tight ends look good. Position coach David Raih is a smart, young coach who says the position has good depth. All eyes are on C.J. Fiedorowicz, a 6-7 junior who could emerge as one of the top tight ends in the conference. He made some nice catches today in situational scrimmage work. Iowa head coach Kirk Ferentz told me Zach Derby has made some big strides from the spring.

And this is all good, as the tight ends will be a bigger part of the offense under coordinator Greg Davis. Look for more movement from the tight ends, too. When Davis pushed the buttons on the Texas attack, he made liberal use of tight ends.

In talking to new defensive line coach Reese Morgan before practice, he feels confident the unit will come together. Just having Carl Davis and end Dom Alvis back after the duo missed spring drills has made a difference in the first few days of camp, Morgan told me. Senior tackle Steve Bigach had a good practice and must be a leader up front.

After practice, Kirk Ferentz told me how impressed he has been with sophomore tackle Louis Trinca-Pasat. Ferentz said Trinca-Pasat was buried on the depth chart in the spring but has made a remarkable ascent. He looked good today in registering a sack in a controlled scrimmage. This line needs playmakers. Coordinator Phil Parker says a youngster to watch is redshirt freshman Darian Cooper, who figures in what Parker hopes is a four-man rotation at tackle.

The secondary figures to be only as good as the line. Still, the unit has potential. Defensive coordinator Phil Parker told me he likes his corner tandem of senior Micah Hyde-the top NFL prospect on the roster-and junior B.J. Lowery. But the safeties hold the key. Junior Tanner Miller is a veteran presence at free safety.

But the guy to watch is sophomore strong safety Nico Law. Some compare his potential to former Hawkeye star Bob Sanders (yeah, I know.) No doubt, Law is a big hitter. And he delivered some blows today, eliciting some "oohs" and "aahs" from teammates.

Bottom line: Law could be a special player and a big key to a defense that needs to make strides.

Walking off the field with Kirk Ferentz after practice, he talked about the youth of this team. There are 32 first-year players on the roster. And there are only six senior starters on the projected depth chart: four on offense and two on defense. That?s the lowest number entering any season in Ferentz?s 14 campaigns in Iowa City.

What?s it all mean? There could be growing pains this season for a Hawkeye program whose best days may be in coming seasons. That doesn?t mean Iowa can?t excel this fall, but the future certainly looks bright regardless.

There was lots of heavy hitting at the practice we watched this morning – even though players were only in helmets and shoulder pads and not full pads. One of the best moments was when junior linebacker James Morris and senior guard Matt Tobin got engaged in a scrum that morphed into a swarm of players. It was a spirited battle that picked up the energy of the practice.

Can you feel/hear that? Maybe not. But I can. It's the sound of football, America! And it is beautiful. #Hawkeyes #B1G pic.twitter.com/TpytgQb8

It was fun to watch the running backs. Sophomore Damon Bullock was running with the first team and had his moments. Freshmen Greg Garmon and Barkley Hill also looked good. Each is of similar build, with both being longer, lithe runners who have a burst. And each youngster looked good in pass protection drills, getting good bases and taking on hard-charging linebackers. There were lots of violent collisions. Fun stuff to watch.

Davis dropped hints he felt the receiving corps needed to get faster. Senior Keenan Davis heeded his words, dropping weight and looking quick in and out of his cuts today. Wideout coach Erik Campbell told me he likes the way the unit is taking shape, with sophomore Kevonte Martin-Manley also making some nice moves and catches this morning. Campbell also told me to expect some speed freshmen to work their way into the rotation – guys like Maurice Fleming and Tevaun Smith.