Olympic Journal: Injured Leg Won't Get Me Down 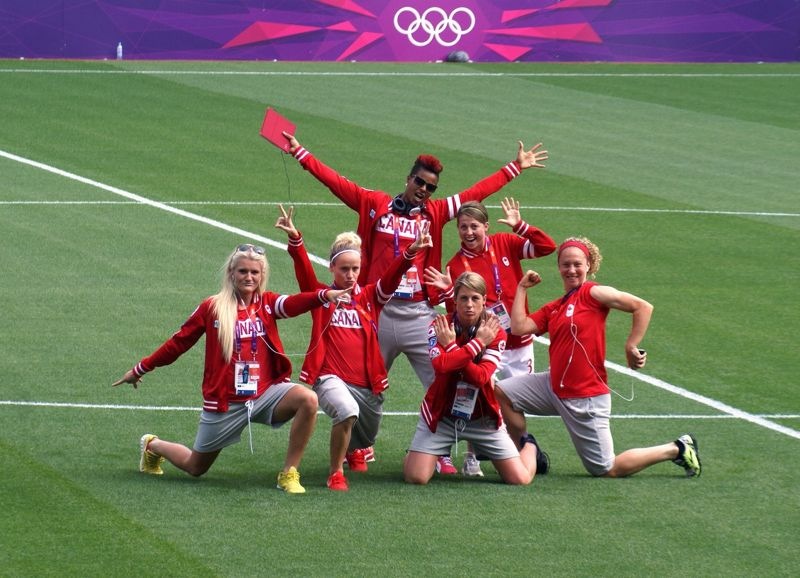 Former star Illini soccer player Emily Zurrer sends back her latest update as part of our ongoing Big Ten Olympic Journals for the 2012 Summer Olympics. In this post, she discusses the disappointment over her injury, but her spirits remain high.

"WANTED: A new hamstring. Size M-ML. (I?ve been lifting hard). Preferably a soccer player?s, but a 100-meter sprinter will do as well…

"Since I last wrote, a lot has happened here in Britain.

"After rehabbing religiously for a little over two weeks, I tested out my hammy right before our second game vs. South Africa to make sure I could play on it, and I tore it again in a different place.

"This means I am out for at least another three to four weeks, and will not be able to come back in time for the rest of the tournament.  A few nights ago I gave up my accreditation to an amazing teammate who will take my spot on the roster for these Olympics.

"Over my playing career, I have to say I?ve been pretty darn lucky when it comes to injuries. There has been nothing that has really forced me to sit out for long or that I haven?t been able to play through.

"Gashes in the forehead? Stitch it up and throw on a Full 90. Sprained ankle? Just tape it. Broken arm? ?Sorry Doc, I can?t have surgery I have a game this weekend. Can we just throw a cast on it??

"These are all events that have actually happened in the course of my playing career. The cast was for a broken hand I suffered when I was playing professionally in Germany post-college, and yes he put a cast on it and I played that weekend. (My hand is fine).

"**Just for humor?s sake I have had a total of about 20 stitches in my head. About 15 right down the middle of my forehead in a Harry Potter-esque lightening bolt (nice) which I suffered at the 2004 U-19 World Cup in Thailand before I started my freshman year at Illinois. 3 in my temple which I got from an elbow at the 2010 World Cup qualifying tournament in Cancun.

"And I think about two or three somewhere in the back of my head when one of my best college friends and goalkeeper, Lindsey Carstens and I smashed heads into each other during practice. I can?t even remember the year but I?m pretty sure it was her fault. (JK Lin). Luckily the people who stitched me up have been excellent and you can barely see the scars, but I have pretty much come to terms with the fact that I will never be a CoverGirl. Shoot.

"Anyways, this is one of the few times that I have actually been physically forced to sit out for multiple weeks, and the timing could not have been worse.

"I would be lying if I said I wasn?t devastated. Who wouldn?t be? But I am doing what anyone else on this team would do – looking past the personal heartache and understanding that this team is about more than just one individual. In fact, I am not the only one who had to give up her spot on the Olympic roster. One of the best people I know, Robyn Gayle filled in for myself and another injured center back during that South Africa game, and she ended up hurting her hamstring, resulting in her switching out as well.

"The great thing about being on a team like this is that when one goes down, there are 20 others willing to step up for you – on and off the field. That is what being on a team is all about. As much as I would rather be on the pitch today, tomorrow, next week, I have accepted the fact that I will be representing my team off the field this time. And I hope to do my hometown, Illini nation, the Big Ten, and my country proud.

"Tomorrow we take on Great Britain in the quarterfinals. One more game and we will have two shots at a podium finish. After coming behind 2-0 to tie Sweden 2-2 in our last game, we have picked up some serious momentum heading into this match. It is a favorable draw for us although they will be no pushover. It is going to be a battle and we are stoked to be playing in front of a sold out crowd tomorrow night in Coventry. Great Britain will undoubtedly have the home crowd advantage, but what the Canadians lack in numbers I?m sure will be made up in noise and enthusiasm (and maybe a little bit of crazy).

"The ice on my leg is now melting so I have to end this. Any applications for hamstring donations can be sent to the Olympic Village. Thank you in advance.

"One last thing: Just to show you how great my teammates really are, I will share a conversation Robyn and I had today.

Editor's note: Look back at Zurrer's Illinois bio page at FightingIllini.com and find her entries from London on her Big Ten Olympic archive page. Zurrer is also on Twitter @emme_Z.