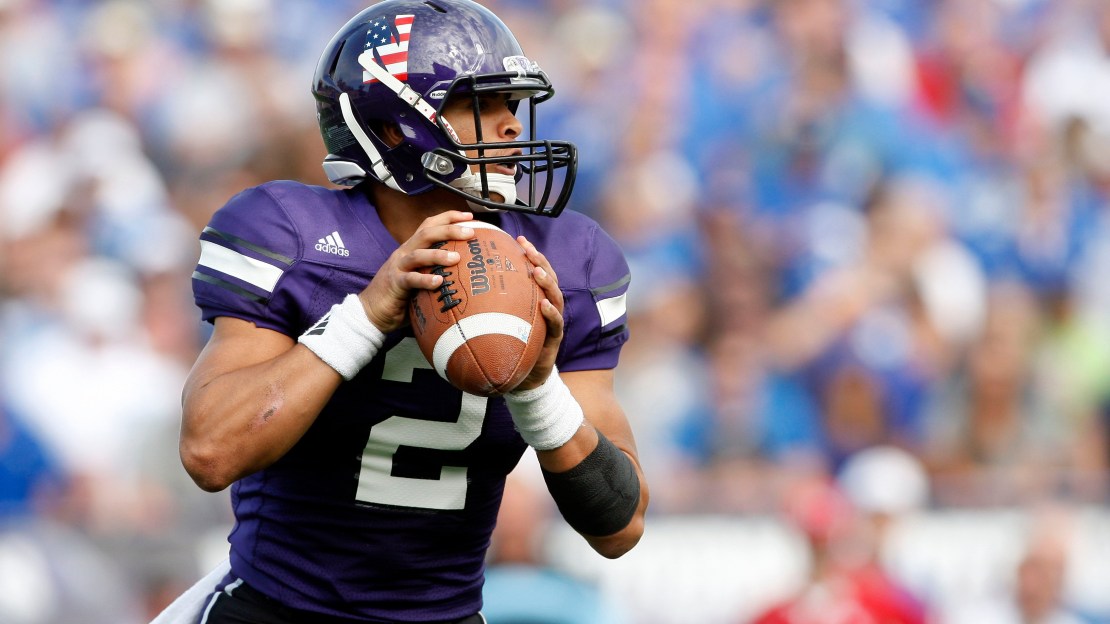 Mick McCall?s offense is ticking at Northwestern. The Wildcat offensive coordinator, who is in his fifth season on the job, has developed one of the more consistently potent offenses in the Big Ten under Pat Fitzgerald. Last season, the attack ranked second overall in the Big Ten (420.9).

The passing game led the way, ranking first in the Big Ten (254.2 ypg) for an offense that was fifth in the conference in scoring (28.9 ppg) for a program that went to its school-record fourth consecutive bowl. The area that needs work? The rushing game. The Wildcats ranked seventh in the league in rushing (166.6 ypg). And the program hasn?t produced a 1,000-yard rusher since Tyrell Sutton in 2006.

McCall has much to work with in 2012, beginning with the makings of a strong line. And the receiving corps may be among the Big Ten?s best, as it boasts talent and depth. But questions loom at quarterback and running back.

Kain Colter flashed promise last season at quarterback filling in for an injured Dan Persa, who has departed. But Colter, a 6-0, 190-pound junior, needs to improve as a passer to take advantage of his wideouts. Colter hit 67.1 percent of his passes for 673 yards with six touchdowns and one interception in 2011. He also led Northwestern in rushing with 654 yards and nine touchdowns, and also caught 43 passes for 466 yards and three touchdowns. Was there a more versatile player in the nation? Still, he has ample room for improvement.

And who will be the top ball carrier? Junior Mike Trumpy, who is coming off a knee injury? Sophomore Treyvon Green? Senior Tyris Jones? Many think incoming freshman Malin Jones may end up being the top option.

I caught up with McCall prior to the Wildcats heading to training camp to get his thoughts on his 2012 offense.

Q: What are you looking for Kain Colter to do better?
A: He needs to trust what he sees and reads. That?s the biggest thing. Anytime you are a first-year quarterback, you think you know what all 22 guys are doing on the field and where your read is and that you have your progression down and all that kind of stuff. But when the bullets are flying, sometimes you squeeze it a little bit because you aren?t quite sure. He needs to trust what he sees and go play. When he does that, he?s very, very good.

Q: Three starters are back on the line. Can that group be a strength for you?
A: I think it has a chance. Brian Mulroe is as good as there is. Brandon Vitabile is good. Those two guys have really emerged as leaders in that group. There are some young guys on the right side in Neal Deiters and Chuck Porcelli. Jack Konopka is gonna have a say over there. We have a couple young guys in (Matt) Frazier and (Geoff) Mogus who have an opportunity. We will see what happens. We have a chance. But it still comes down to the quarterback situation, doing the right thing, directing them in the right way and getting the ball out of his hands.

Q: The program hasn?t had a 1,000-yard rusher since Tyrell Sutton in 2006. Will that streak end this season?
A: I don?t know why it has been so long. Tyrell was an excellent player. The biggest thing is it?s just hard to stay healthy an entire season. The guys we have had in there, Mike Trumpy a year ago started off like gang busters and then got dinged up. It?s hard to stay healthy. It?s a tough position to play and keep your health. We aren?t worried about not having a 1,000-yard rusher in X-number of years. That isn?t our concern. We ran the ball a lot better a year ago and we will continue to get better at it. If the middle is plugged up and we have guys on the outside who can play, we will get them the ball. So everything is geared toward getting the ball in the hands of our playmakers and getting them in space and letting them make some plays. However we do that remains to be seen. But I think we have a pretty good plan.

Q: How deep is your receiving corps?
A: We have some good guys there. We are replacing two guys who were pretty good in Jeremy Ebert and Drake Dunsmore. We have some depth and some younger guys coming on. So we are really excited for that group, to get the ball in their hands.

I think the one thing that continues to strike me as far as the entire team goes is we have as much speed as we ever have had since I have been here-and this is my fifth year. We have really good team speed at every position. We are young at some spots but we are pretty athletic. We are excited to see this group work and get them in the right spots.

Q: Who are some of the wideouts you are excited about?
A: Getting Tony Jones back is huge. Rashad Lawrence has really done a good job. Christian Jones, we moved him inside. Cam Dickerson is a guy who came out of the spring and is pretty good. And we have Demetrius Field, who has played a lot of football for us. And Kyle Prater, too. He has done a good job fitting in and being a Wildcat. We have some guys who can do some things. And who knows? As things go on, we may have to get Kain in some spots where he can make some plays. Who knows? We will do whatever we have to do to get the ball in the hands of our playmakers.

Q: Who will be the next Drake Dunsmore?
A: Tim Riley and Mark Szott were dinged up in the spring and Evan Watkins was, too. We will find out. I don?t know. It could be a young guy. We need to find that out in camp, who will be our ?superback.? It may be a combination of guys.

Q: Do you think touted freshman running back Malin Jones can have a big impact?
A: We don?t know anything about him. He was here all summer, but we can?t watch workouts. But we hear he is doing a great job, like all of our freshmen. We will see. It would be great if he came in and gave us some things. A bunch of these freshmen could come in and make an impact. We will see.