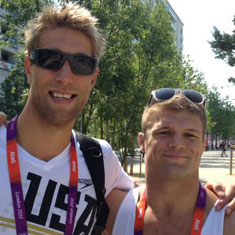 NUsports.com posted the latest Olympic update from Wildcats head wrestling coach Drew Pariano and we'll share it here as part of our Big Ten Olympic coverage. Pariano and associate head coach Tim Cysewski head to London to support Northwestern graduate and U.S. wrestler Jake Herbert as he competes in the the 84 kg freestyle division. In this entry, Pariano looks at Herbert's Olympic competition.

"I believe that the 2012 competition will be unlike any other when it comes to top-level performances. It's not rare to see former World and Olympic Champions wrestle in the first round because FILA rules (the governing body of international wrestling) state that they do not seed the top wrestlers based on past World and Olympic results. For example, Jake will not receive preferential seeding consideration based on his silver medal at the 2009 World Championships. It's what we call a blind draw.

"Jake has competed against numerous wrestlers in the qualified field. He went head-to-head with 2009 World Champion Zaurbek Sohkiev (Uzbekistan) and has a win over the most recent World Champion, Sharif Sharifov (Azerbaijan). Ibragim Aldatov (Ukraine), Dato Marsagishvili (Georgia) and Albert Saritov (Russia) are all world medalists and represent a veteran group at 84 kg. Jake will not know his draw until the night before competition.

"Unlike the World Championships, each nation must qualify the Olympic weight class through placement at the 2011 World Championships (top 5) or through international events such as the Pan-American Championships. Advancement in each individual bracket is based on winning the best-of-three periods and scoring per period does not carry over; unless there is a fall, which immediately ends the match.

"All athletes who make it to the semifinal round are guaranteed a medal match, meaning that those who are defeated in the semi's will wrestle for bronze. Each weight has the gold, silver and two bronze medals up for grabs. Ironically, there are also two fifth-place finishers per weight.

"You can stay alive in the consolation bracket if the wrestler who defeated you makes it all the way to the gold-medal match. If this happens, you are entered in the repechage; and you have the ability to wrestle back to face one of the semifinal losers for a bronze medal."