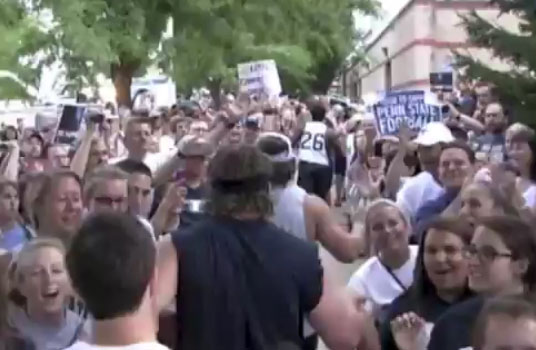 (AP) After sweating through an early-morning workout outdoors, Penn State fullback Michael Zordich and his teammates gestured to excited fans to join their end-of-session huddle.

"One, two, three. Family!" they exclaimed in unison.

Amid uncertainty over who will stay with Penn State's football program a week after the NCAA imposed stiff sanctions for the Jerry Sandusky child sex abuse scandal, at least 2,500 fans, alumni and local business owners rallied outside the football building Tuesday for Nittany Lion players.

"It was so cool. I couldn't believe how loud it was," Zordich said. "This just goes to show why we're still here and why we're going to fight this thing through."

Most of the team appeared to be in attendance for the offseason workouts, which aren't mandatory. A player noticeably missing was star tailback Silas Redd, one of a handful of Nittany Lions considering an immediate transfer after the NCAA allowed current players – because of the penalties – to look at other schools immediately rather than sit out a year. Read the full AP story.