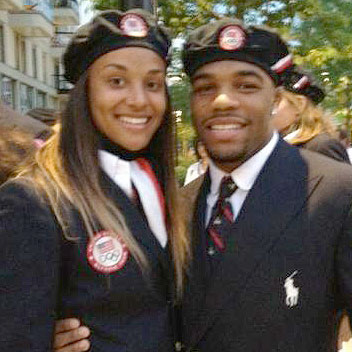 With the Olympics off to a roaring start, we've been keeping our eyes on the Twitter accounts for any Big Ten name competing in London. Have a look at a few choice tweets from over the weekend, and see the entire list of Big Ten names involved in the post below.

Congrats to @NickMcCrory1 and @davidboudia on their bronze medal today in 10m synchro!!! You boys did awesome! Go #TeamUSA

Watching the other athletes compete and do their thing- smiles, tears, medals….NOW its finally real….NOW its sinking in…..#London2012

Me and my #Illini brother @DeronWilliams at the Opening Ceremonies. http://t.co/ZqaepEhy

Getting so pumped to kill it out there in team finals for team USA! #lesdoit

Met all of the @todayshow hosts at practice today! Here's a picture of me and Al Roker ? pic.twitter.com/N5XSPGqp

Remember these things? Mama Boudia brought one of my first ones to join in on the Olympic action! #beaniebabies pic.twitter.com/VDP41pjy

Thanks everyone for all the well wishes! I'm feeding off your positive energy and bottling it up for some fast swimming!

Gotta give it to @usabasketball … Marching with #TeamUSA, showing patience with pictures, and very polite through the whole process

And here are some of those pics I promised you guys…. Me and "The Kid" @MattCentrowitz http://t.co/BHtJE9Hz

Me and 2004 Olympic Champion in the 100 meter dash @justingatlin pic.twitter.com/IM3lNuyB

The Big Ten Conference and member schools released their official lists of all Big Ten names past and present competing in the upcoming 2012 London Summer Olympics. The list includes the handful of Big Ten athletes contributing Olympic journals to BTN.com, featuring an entertaining band of Big Ten swimmers.

You can also read all of BTN.com's Olympic coverage in our special 2012 Olympics Section. Also, we're posting best wishes from readers to our Olympians on this page. Drop us a note for publication and we'll be sure to add it.

Note: Participants include all current and former student-athletes, coaches or alumni (ex. individuals competing in weightlifting who attended a Big Ten school) who are scheduled to participate in the Olympics. If the participant was a current or former coach at a Big Ten institution, their current position appears in parentheses.