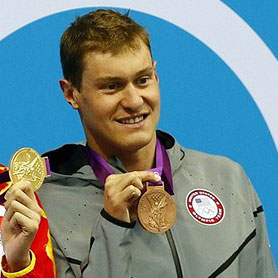 The latest of our Big Ten Olympic Journals is in and this time U.S. swimmer and Michigan product Davis Tarwater is back to tell us about the Opening Ceremony, bronze medals, and one big Wildcat. Tarwater is one of four Big Ten swimmers teaming up to send back journal entries as they prepare for the 2012 London Olympics.

One of our contributors, Peter Vanderkaay, won his fourth career Olympic medal with a broznze medal in the 400-meter freestyle. Read more at MGoBlue.com and dive into this post to hear the latest from Tarwater, his old college teammate.

Here's what Tarwater sent us on Sunday.

"What?s up Big Ten Nation? It?s been awhile since I last dropped in but we have been seeing a lot of action over here.  Connor 'The Future' Jaeger and I walked in the opening ceremonies on Friday. Our team rule was that anyone who is competing in the first three days of the games is advised to stay off their feet. Luckily for both of us we swim later in the eight-day meet.

"While we weren?t able to see the first part of the show, by the time we got to walk in, the energy was greater than any moment previous in my life. I was truly in awe when I walked into the stadium. However, 'The Future' did not look as good in his beret as I ?The Past? did. This is due in part the French-style mustache that he is incapable of growing. It?s important to always look the part. I can only attempt to teach these things bit by bit. Hopefully he will learn for next time to look like more of a professional.

Me with the rock star Davis tarwater pic.twitter.com/Xipe31BL

"Secondly, after he finished listening to his pump up round of Katy Perry, Peter Vanderkaay etched his legacy as one of the greatest freestylers in American history. It was a true honor to see him capture the bronze medal in what was an incredible swim. We have come a long way from being scrawny freshmen at the University of Michigan checking into the West Quad Dormitory in 2002.  We have had debates that have raged on for an entire decade that remain unresolved as well as a bank of memories with our classmates that we truly cherish. And maybe, just maybe, if he keeps trying, keeps winning medals, he will finally get a date.

"Thirdly, Matt Grevers is about to become a household name. The guy is really on fire here. When he stands behind the blocks, he makes the other athletes look like children. This guy is really quite large. Stay tuned in because this guy can go. He qualified for Monday's 100 back final."

"Finally, life in the Olympic Village has been really exciting. There is just a ton of energy. It?s really fun when all of the athletes from various sports congregate after the evening sessions at the massive dining hall and show off their medals.

Being apart of Team USA is a really special experience. Specifically, we share the dorms with the track team and the unity of Team USA is palpable.  It?s really amazing how people with different backgrounds and experiences can rally together around each other. The Olympics have a really powerful effect. So far I am so humbled and so thankful to be a part of it. Thanks for tuning in. Go Blue."