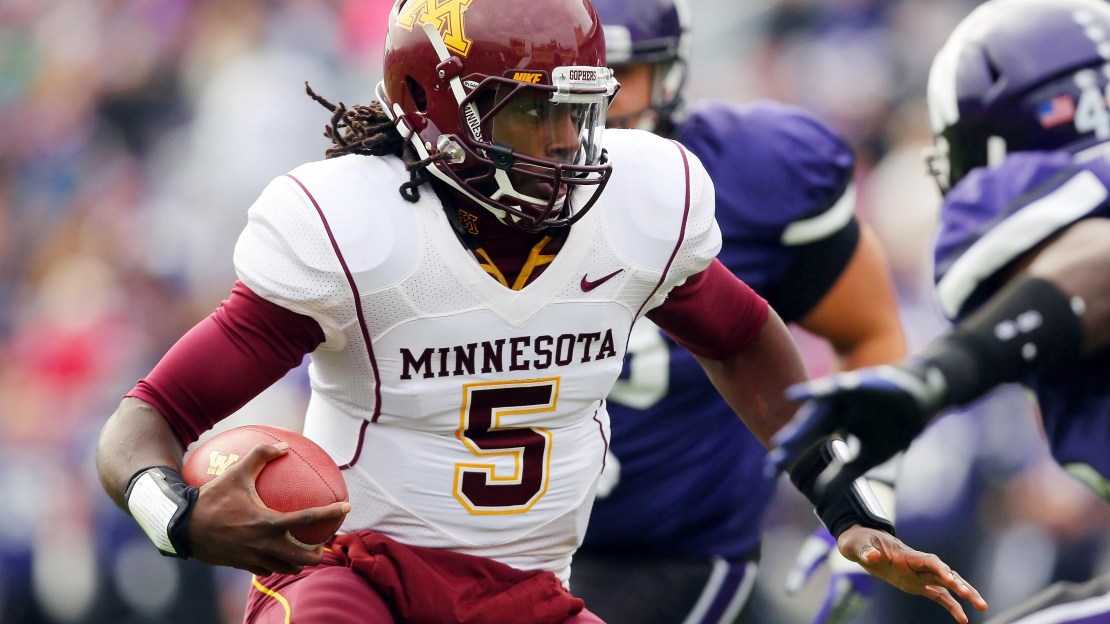 Last season was one of transition for Minnesota. Tim Brewster was out after three-and-a-half years and a 15-30 overall record (6-21 Big Ten). Jerry Kill was in, arriving after a successful three-year run at Northern Illinois that produced a 23-16 overall mark and three bowl bids.

Kill?s 3-9 debut was marked with ups and downs. Low points were home losses to New Mexico State and North Dakota State in September. The highs featured victories over Iowa and Illinois. But know this: The best is likely yet to come. Kill had losing records in his first season at his three previous stops (Emporia State; Southern Illinois; Northern Illinois. But big things ensured at each school after that.

Here are 10 reasons for Golden Gophers fans to be excited about the coming season:

1. It?s Year Two for the new staff. Jerry Kill?s philosophies have been implemented and ingrained. Everyone knows the expectations. The learning curve has flattened out. And there is something to build on with that season-ending victory over Illinois.

2. MarQueis Gray. He is one of seven dual-threat quarterbacks in the Big Ten. And-Who knows?-maybe he could end up being the best. It?s a long shot, but he showed how deadly he is as a runner last season, setting a school single-season mark for rushing yards for quarterback with 966. But to become elite, Gray needs to improve as a passer. The senior hit just 50.7 percent of his passes last season with eight touchdowns and eight interceptions.

3. James Gillum. The JC transfer running back could be just what the doctor ordered for a running back corps that lacks many veterans and has been injury prone. Gillum, who ran for 2,339 yards in two seasons in the junior-college ranks, will team with sophomore Donnell Kirkwood to give Minnesota a potentially strong duo at running back.

4. Welcome back, Troy. The staff is elated to have back cornerback Troy Stoudermire, who broke an arm four games into last season. Stoudermire will be joined by Michael Carter, a senior cornerback who has returned with a renewed commitment to academics and discipline. He impressed in spring ball and looks to be the team?s best cover man after three largely disappointing seasons. Carter will team with Stoudermire to give the Golden Gophers a potentially strong cornerback tandem. Stoudermire doubles as a deadly return man, holding the Big Ten career record for kickoff return yards.

5. Ra?Shede Hageman. The 6-6, 300-pound junior could be a force at defensive tackle-if he?s dialed in and motived all season. Hageman is a unique combination of size and athletic ability who was an all-state tight end in high school and was tried at defensive end at Minnesota before settling in at tackle.

6. The Olson brothers. Ed (tackle) and Tommy (guard) start side-by-side on the left side of the line, forming a strong duo for a line that has potential. It will be vital for the Olson?s to be leaders and get a consistent push for an offense that ranked last in the Big Ten in 2011 (310.3 ypg).

7. Mike Rallis. The senior moved to middle linebacker after playing on the outside and figures to be a cornerstone of a defense that needs to show improvement after ranking 10th in the Big Ten last season (403.1 ypg). The rushing defense was especially dismal, ranking 11th in the conference (186.4 ypg). Rallis will be joined by fellow returning starting linebacker Keanon Cooper on a defense that returns three starters.

8. Staff continuity. There were no changes to Jerry Kill?s staff. So, the consistency of having the same voice-the same message-for a second season will help a program that has the longest Rose Bowl drought of any team in the Big Ten, dating to the 1961 season. Kill said three of his assistants had chances to leave for better jobs after 2011-but all opted to remain. And six of Kill?s nine assistants have been with him since 2001.

9. Kill is healthy. That?s what he pronounced at last week's Big Ten media days. Last season, Kill-who is a cancer survivor-endured two seizures, including one of the sidelines toward the end of a home loss to New Mexico State. But he?s fit, rested, in shape and ready to go. That?s great news.

10. Depth. Listen to Jerry Kill talk, and you?ll hear him lament his team?s lack of numbers during his debut in 2011. Now, the numbers are better. There is depth, which will make practice better, competition better and the team better as the Golden Gophers look for their first bowl since 2009.