Denard Robinson To Big Ten Crowd: It's About Choices 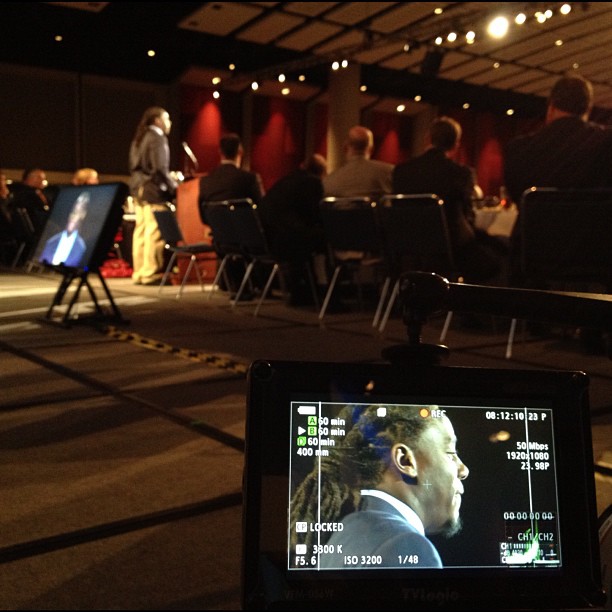 Among his popular remarks, Robinson said, "My motto is: It's my goal to make somebody's day every day." Robinson also said, "Trust me, I'm not perfect. Just ask Coach Hoke. I drive you crazy way too often, right Coach?" Robinson also drew applause when he said, "Character is who you are when no one else is watching. It's easy when you know the camera is on us to do the right thing but it may be tougher at other times. This year, because of that, I became aware of how big our platform can be. I met the President of the United States and I met LeBron James and they both knew who I was."

There's a full transcript of his speech at ESPN's Michigan football page.

MGoBlue.com recorded some short clips with Robinson during the two-day event. We've posted them below here.

Here are a few tweets about Robinson's speech:

Have never covered a more humble superstar than Denard Robinson. He's come a long way from the shy freshman who avoided the media. #genuine

You've seen the tweets from Denard Robinson's speech. One last time, here's the genesis of how he decided to talk: http://t.co/MTSeQR4U

If you missed any of our coverage the last two days, dive on in. Our TV and web teams provided newsy updates include notebooks from Thursday and Friday, a photo gallery, and a nice roundup of changes to various football uniforms. We even got #B1Gfootball trending on Twitter. Also, watch your football coach takes questions from reporters in our media day video gallery, including inaugural Big Ten Media Day talks from Urban Meyer, Bill O'Brien, and Tim Beckman.

Now it's time to get prepared for BTN's annual Football Tour in August. And don't forget: If you love watching our award-winning show "The Journey," then you?ll love ?The Journey: Big Ten Football 2012.? It debuts Oct. 3, but you can follow our Journey crew every step of the way on Twitter and our recently launched Facebook and Instagram (BTNJourney) pages. On Twitter, we?ll be using the Twitter hashtag #BTNJourney both during the shows and all the days in between.