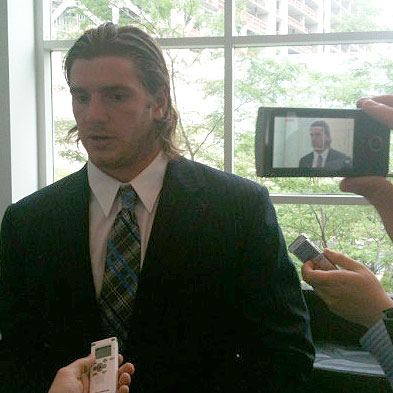 Michael Mauti looks like he?s ready to hit somebody or something. The Penn State linebacker sports slicked back hair that covers his neck, his suit coat pulled tight across his arms and shoulders as he leans forward answering questions and staring at a water bottle in front of him. They are tough questions about teammates transferring, and Mauti speaks with passion. He speaks from the heart. It?s refreshing.

?I have been selling,? Mauti said Friday during the media availability before the Big Ten Kickoff Luncheon in Chicago. ?I have talked to most everyone on the team. We want them all to stay. But they have to make their own decision on if they want to stay. We want everyone here to be a part of this. This is a family. Our stadium will be rocking every game.?

So far, no Penn State players have left, even though NCAA sanctions permit any Nittany Lions to leave without having to sit out a season as a transfer.

?We aren?t going to have people tear apart our program,? said Mauti, who isn?t happy about other schools trying to woo Penn State players-especially other Big Ten schools.

?We haven?t forgotten about the victims in this case," he said. "At the same time, we have to move forward, too. We have a season to play.?

Think about it: Michigan safety Jordan Kovacs had to think about the question.

?When was the last time Michigan won the Big Ten title?? Kovacs asked back to the questioner. ?I think it was 2003.?

Wrong. But Kovacs was close. It actually was 2004, when Michigan shared the crown with Iowa and lost to Texas in the Rose Bowl. It?s true: seven seasons have passed since the Wolverines could call themselves Big Ten champs. The last time Michigan suffered a similar drought was from 1951-6-a 13-year title-less period.

?Every year we dream of winning the Big Ten championship,? said Kovacs, a former walk-on-turned star and key leader. ?It is what you come to Michigan for. (As a senior) this is my last shot.?

On the field, Michigan must deal with a re-worked defensive line. And who will catch passes? But, the biggest obstacle for the Wolverines may be the schedule.

?It?s probably the toughest in the Big Ten and in our history,? said Kovacs.

If it?s any solace to Kovacs, the 1997 Michigan team also faced what many felt was a daunting schedule that would impede success. In fact, based on teams? 1996 records, Michigan had the toughest schedule in the nation in 1997.

"It's a little akin to climbing Mount Everest,? said coach Lloyd Carr. ?But Mount Everest has been climbed. And with great preparation and determination, and great attitude, which I think our players have, I can assure you we're looking forward to it.?

Alas, the Wolverines went on to win the national title.

B1G additions: There have been many notable hires over the years at Big Ten schools that have changed the course of a program?s history.

Hayden Fry?s arrival at Iowa in 1979 was the first step in making the Hawkeyes a consistent Big Ten power. Bo Schembechler immediately made Michigan matter in 1969 after what mostly was a dreary 1960s. Wisconsin never has been the same since Barry Alvarez began changing the fortunes of the Badgers in 1990.

In time, we likely will be saying the same thing about Urban Meyer and his arrival at Ohio State for the 2012 season. In fact, Meyer could be as big-or maybe even a bigger-a hirer as Woody Hayes was in Columbus in 1951.

?The first thing I think about when I hear Urban Meyer?s name?? says Iowa center James Ferentz. ?National championships. That guy is a great coach who will be good for the Big Ten and make things more competitive. He?s a winner.?

Meyer brings a cachet with him to the job that the Big Ten needs. He won two national titles at Florida (2006 and 2008). No other Big Ten coach has even coached in a national championship game. And Meyer is pushing the envelope as a recruiter-which drew the ire of Wisconsin?s Bret Bielema this past winter. But that?s water under the bridge.

?We have a very, very good relationship,? said Meyer. ?I think you'd have to ask coach, but we get along fine. We had a conversation about it at the Big Ten meetings, I believe it was in February. A lot of the things that were reported weren't said.

?We stand by exactly the way how we do things. And from my understanding, once again, it hasn't been discussed again, there's absolutely no problem whatsoever with the way Ohio State does their business. And that comes from the fellow coaches in our Big Ten conference.?

And having a good relationship with his fellow coaches matters to Meyer. He wants to get along.

?Absolutely,? he said. ?I can't see it any other way. We had that in the SEC and we certainly have that in the Big Ten. A lot of times things start getting — I start reading something and I'll read it and say that wasn't said or where are they trying to go with this? And there's a very good relationship with everybody in that room with the Big Ten conference as well as when I was in the SEC.?

The Game: Speaking of Ohio State, it?s well-documented that the Buckeyes aren?t eligible to play in a bowl or win the Big Ten title because of NCAA sanctions. So, with nothing tangible on the line, will Ohio State put even more emphasis on the season-ending game with Michigan-if that?s possible?

?Sure,? said Meyer. ?I don't know if you can add any more to it. And the big reason is hopefully by the end of the season there's going to be two really good football teams that are going to go play each other.

?But I think that will be — I certainly imagine in our home stadium there will be a buzz about that. I've already heard it. And I haven't made that decision on how we're going to attack that game other than it's the biggest game of the year and we will get ready for it.?

Tough road: Is there a team that plays a more challenging non-conference schedule than Michigan? Probably not. The Wolverines will play Alabama in Arlington, Texas; Air Force; UMass; at Notre Dame before getting an off week to catch their breath before commencing with Big Ten play at Purdue.

?I think obviously September 1st is a day that most people in this room understand that great game that we'll play down there and it's a real privilege to have Troy Calhoun and the Air Force Academy come into Ann Arbor because of the significance of those kids who are out there for Air Force and their duty to country,? said Michigan coach Brady Hoke.

?I think UMass is a moving up program and a new head coach and obviously the great national rivalry we have with Notre Dame playing them down in South Bend at night. So we're excited about the non-conference schedule.?

Making matters potentially dicey for Michigan in that challenging opener vs. the defending national champion Crimson Tide is the fact the Wolverines may be without star running back Fitzgerald Toussaint, who has been suspended indefinitely following his arrest on DUI.

Has Hoke made a determination of if Toussaint-or defensive lineman Frank Clark, who also is suspended–will play?

?No,? he said. ?Obviously there's a standard of performance we expect at Michigan from an academic standpoint to a community standpoint and to an athletic, competition standpoint. And we have — they're right now indefinitely suspended. They're going to pay the price for poor judgments which a lot of 18 to 23-year-old kids make and then we'll make a decision down the road.?

Oh, by the way: Michigan was picked by the media to win the conference.

Changing it up: Much has been made of the fact Wisconsin is breaking in six new assistants. But Iowa?s staff also has undergone a lot of transition.

?It's been a historic season for us that way,? said Hawkeye coach Kirk Ferentz, who entering his 14th season in Iowa City is the longest tenured coach in the league. ?Our players have had the same leadership on campus now for 13 years. Norm Parker, just an outstanding defensive coordinator. And Ken O'Keefe did a tremendous job as our offensive coordinator. And Chris Doyle's our strength and conditioning coordinator. So that's been something that I've appreciated, really appreciative of all the contributions those guys have made, not only in terms of the coaching but everything they've done for our program.?

But the most radical move is bringing in Davis to push the buttons on an offense that many feel had grown predictable.

Davis, the former Texas coordinator who was out of work last season, will spice up the attack and enhance the passing game.

?Offensively, we went a different route and hired Greg Davis,? said Ferentz. ?I thought we knew what we were getting. We hoped we knew what we were getting, but it's a little bit like marriage; until you get into the relationship, you're never sure what's going to happen. And Greg has just been a fantastic addition. A tremendous person, tremendous coach. Great expertise. Works extremely well with our staff members and players, and it's been a great fit in our community already.?