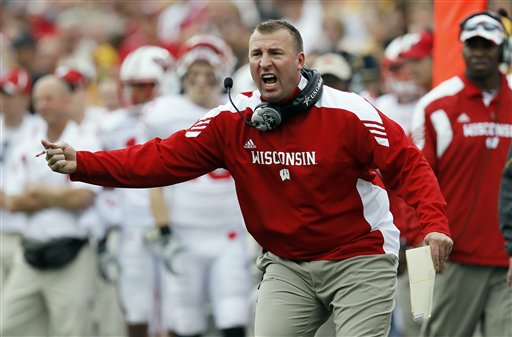 Wisconsin football coach Bret Bielema has long been a proponent of playing Big Ten games during the season's first four weeks, and he'll get his wish in 2013. Wisconsin announced Wednesday in a press release that it will host Purdue on Sept. 21, 2013 – also known as Week 4 – one week before the Big Ten typically starts conference play.

?One of the things that I?m excited about is adding a conference game to that beginning four weeks of the schedule, much the same as the SEC does,? Bielema said in the release.

?It?s similar to the SEC model, and anyone?s who has won six consecutive national championships obviously has figured out how to do things.?

Wisconsin also announced it will host BYU on Nov. 9, 2013, which was originally one of its two bye weeks in the Big Ten schedule.

?I?m very excited because hopefully it?s something that will continue to grow from here,? Bielema said of playing BYU. ?There have been talks beyond next year and that?s very intriguing to me.?

Wisconsin's other bye is October 5, the week after playing at Ohio State. To avoid playing eight straight games without a break, the Badgers, with the cooperation of Purdue, moved the Boilermakers game to Week 4, thereby creating a second bye week in October.