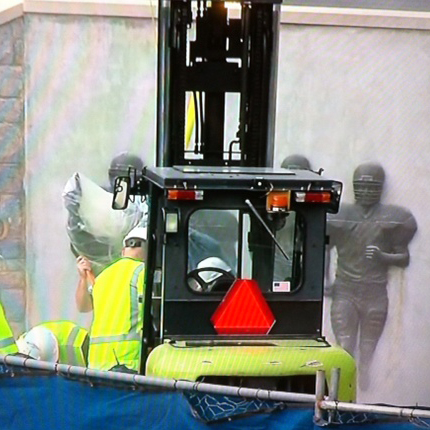 The famed statue of Penn State coach Joe Paterno outside the Penn State's football stadium was taken down and put in storage Sunday morning, and the plaques and letters on the walls behind it are gone, too. Read the full story here and watch all of our video clips from Sunday here, including reaction from BTN's Howard Griffith and Glen Mason. And be sure to read BTN.com senior writer Tom Dienhart's column where he says this is clearly the right thing to do.

But the headline of Sunday morning soon became somewhat of a footnote as the NCAA called a 9 a.m. ET Monday press conference to announce ?corrective and punitive measures? against Penn State. BTN & BTN2Go will air live coverage starting at 8:55 a.m. ET. If you won't be near a TV with BTN but have access to BTN2Go, watch it all live at BTN2Go.com as well as via iPad, iPhone and Android apps. Get details on BTN2Go here.

Earlier Sunday, the university said that it would take down the larger-than-life monument in the face of an investigative report by former FBI Director Louis Freeh that found the late coach, along with three top Penn State administrators, concealed the abuse claims against Jerry Sandusky more than a decade ago in order to shield the university and its football program from negative publicity.

Removing the statue eliminates a key piece of the iconography surrounding the once-sainted football coach accused of burying child sex abuse allegations against a retired assistant. A spokeswoman for the Paterno family did not immediately return phone and email messages Sunday morning but the family did release a statement later.

[Look back at all of our coverage of the Penn State story.]

"I now believe that, contrary to its original intention, Coach Paterno?s statue has become a source of division and an obstacle to healing in our University and beyond. For that reason, I have decided that it is in the best interest of our university and public safety to remove the statue and store it in a secure location. I believe that, were it to remain, the statue will be a recurring wound to the multitude of individuals across the nation and beyond who have been the victims of child abuse."

Erickson added that Paterno's name will remain on the campus library because it "symbolizes the substantial and lasting contributions to the academic life and educational excellence that the Paterno family has made to Penn State University."

Visit PSU.edu for the full statement.

Here's a wide shot of the workers Sunday a.m. [Read more stories on Penn State from The Associated Press.]

Also, here are some tweets and links to more coverage of Sunday's developments.

UPDATED STORY - Jackhammers chip away at base of #Paterno statue, scene calm as dozens look on: http://t.co/FPSzaRJt pic.twitter.com/xMQ51HBw

Paterno statue had to go as world watches http://t.co/0gibNmlw

If NCAA has determined penalties already it's been done outside typical infraction system. Probably something agreed upon by school, Emmert

Machinery, workers taking off lettering on the stone wall that surrounded the #Paterno statue. pic.twitter.com/IzCimvdG

One of the #Sandusky jurors is present and speaking to the media at the #Paterno statue.