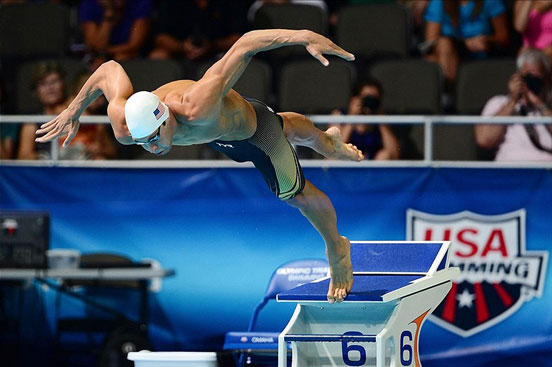 The latest update to our Big Ten Olympic Journal is in, and it comes from Northwestern swimmer and U.S. Olympian Matt Grevers, who details a fun race he had with a U.S. teammate at practice. You should also know that Grevers likes cantaloupe – lots and lots of it. Earlier this week, U.S. swimmer and Michigan student-athlete Connor Jaeger posted about life leading up to the Olympics before some team introductions from Peter Vanderkaay and Davis Tarwater's first post.

Here is what Grevers sent us on Friday.

"This is Matt Grevers from Northwestern University class of 2007, blogging from my hotel room in Vichy, France.

"My day started with Nathan Adriann, my roommate, waking me up with his unnecessarily loud packing for practice. I didn't really mind being woken up and decided that I'd head to the pool for a little wake-up swim. I packed my own bag, brushed my teeth, put in my blurry contacts that I need to exchange and headed down the elevator. Officially breakfast hadn't started yet but the hotel puts on a nice spread of fruit, eggs, bread, and coffee for a little fuel before practice. I finished my plate of hard boiled eggs and cantaloupe, emptied my coffee then headed to the vans.

"The transportation between the pool and the hotel have been great. What would be traffic gets pushed aside by our police escort. This allows for a nice heavy flow of fresh air threw the vans square-shaped windows. Vichy smells rich with foliage to match the abundantly green scenery. This is something I've really missed since moving to Arizona. Unfortunately an occasional pocket of smoke can sneak attack you in the face and turn a pleasant inhale into a cough.

"This morning at the pool I decided to get my workout for the day done with. It was about 2.5k with a bunch of drills and six 50's worth of heart rate. It was a little brisk out, which was a change from the week's previously flawless weather. I was bummed with the overcast day because I know we have only a few more days to get a tan before we head to the sunless region of London. I finished my practice with some time to kill and decided to get in a massage. Life is good.

"I hopped on a van back to the hotel for the real breakfast. I filled my plate with little sausages, eggs, and porridge. My second and more crowded plate was filled with fruit. The cantaloupe here is the most delicious fruit I've ever had. I've consistently eaten at least a half of one every meal. After I had my fill I headed up to the room for some video games with Nathan and Tyler Clary.

"Heroes of Newerth was the computer game of choice today and took up about one and half hours. It was a good day of gaming and we had the rare occurrence of a winning streak. That brings us to lunch time, which,for me consisted of lunch meats, pasta with marinara sauce, and, yes, more cantaloupe. While eating I noticed that Brendan Hansen was watching some video of his dive. I made some comments, he made some comments back. and the next thing I know I was claiming that I had never lost a 25 breaststroke. Conor Dwyer didn't back down to the unspoken challenge and, suddenly, I found myself enrolled in a 25 breast duel at afternoon practice.

"Word of our match race spread through some of the team and sides were chosen. Conor the breaststroker vs Matt the sprinter. Conor had to still follow his original practice plan while I could just prepare for the race. That meant while Conor was doing his 1k warmup I had Arizona teammate and breaststroke specialist Clark Burckle work on my stroke. I was feeling pretty good and was optimistic about a win.

"We were both on the blocks about to take our marks. I heard a good deal more cheers for Conor then I did myself. Maybe that's because Elizabeth Beisel was on Conor's side and she's extremely loud. I heard 'go' and leaped off the block. I knew the only thing I had going for me was my start. If I didn't have a big enough lead after the dive, Conor would certainly run me down. Luckily for me I hit a good one and touched just ahead of Conor to continue my winning streak. It was a fun race that didn't matter at all. I need to do more of those. Following my race came a more serious event by PVK (Peter Vanderkaay). He wanted to swim a 200 free to see where he was and to maybe give the coaches something to think about when it came to choosing the 800 free relay. He went out fast and finished at a 1:47  In this pool, by himself, and in the cold rain made it a very impressive swim.

"Dinner was great as expected. I had lots of fish, salad, fruit, and avocados. We had a short team meeting and I headed up to the room. I was about halfway done with this blog when I got a knock at the door. It was the drug testers. I drained the rest of my bottle of water and headed downstairs. I thankfully was one of the first swimmers notified, which meant I was first in line to pee. The testing was also a blood draw, which historically I don't do well with. This time I didn't embarrass myself and didn't even feel light-headed after the two tiny vials were filled. I was the first one done and released back to my room to finish up this post.

"If you read this entire entry I'm proud of you. Thanks for being interested in our swimming. I promise that we'll all be giving the upcoming races our best possible efforts! Cheers, Matt."