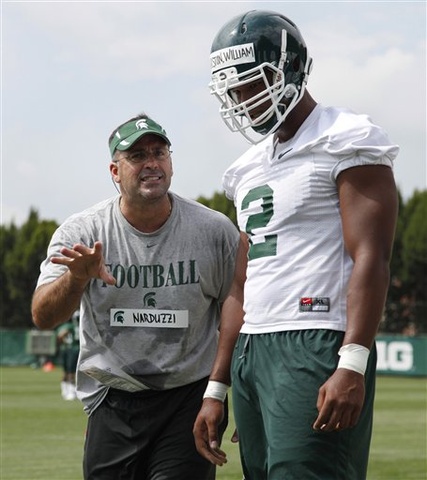 Quarterback Kirk Cousins was the face of Michigan State?s 11-3 season in 2011 that concluded with a win over Georgia in the Outback Bowl. But make no mistake about it: defense was the Spartans? calling card. Credit coordinator Pat Narduzzi, who is one of the hottest assistants in the nation. Michigan State had the No. 1 defense in the Big Ten-and No. 6 in the nation–last season (277.4 ypg). The unit also led the conference in rushing defense (100.5 ypg), interceptions (18) and third-down defense (.337).

That was a major reason why the Spartans won 11 games for a second season in a row. MSU also was third in the league (10th in the nation) in scoring defense (18.4 ppg).

This season, the prospects look as promising for a Michigan State defense that loses just two full-time starters in tackle Jerel Worthy and safety Trenton Robinson.

I talked with the 46-year-old Narduzzi, who is entering his sixth season pushing the buttons on the Spartan defense after following Mark Dantonio from Cincinnati where he also was coordinator, to get his thoughts on a 2012 Michigan State defense that could be better than the standout 2011 unit.

Q: Is it too much hype to say this year?s defense could be better than last year?s defense?
A: That?s way too much hype. We lost Trenton (Robinson), (Jerel) Worthy and a part-time starter in (Kevin) Pickelman. Trenton really ran that back end. We feel like we have some guys who can fill in, but it?s like filling in for a quarterback. Until you have that game experience, you don?t know what you have. It only takes one guy to give up a big play. We could be OK. But there were other years I thought we could be OK and then we don?t make a play here or there. I think we could be good, but we still have to go out and make plays, and I have to put them in the right defense.

Q: How are you going to replace Worthy, a second-round pick of the Packers?
A: We have a couple of guys. Tyler Hoover and James Kittredge, a guy I recruited out of high school but went to Vanderbilt. He was starter on offense for a few games as a true freshman (in 2010). We recruited him as a d-tackle. We thought that was his natural spot. He was recruited by everyone in the county and went to Vanderbilt. Between Hoover and Kittredge, between what I saw in spring ball and how I expect them to develop in two-a-days, they could fill a void in there. Now, can you ever replace a Worthy? I don?t know. Everyone around Worthy made Worthy good, and we hope to do the same.

Q: Could the linebacking corps be the strength of the defense?
A: I think so. Going into last season, we talked about our linebacking corps because they were young and inexperienced and maybe a weaknesses. But they ended up being pretty good for us. We have everybody back. We have a healthy Chris Norman, and I think he?s gonna have a breakout season for us at outside linebacker. And Denicos Allen and Max Bullough run the show in there for us. So, it could be pretty good if we stay healthy. A major thing is we have depth, too, that we feel comfortable playing. We have a kid named Darien Harris who is a redshirt freshman who could be a starter for us. Somebody better watch out. So we have guys. And we try to keep the defense simple enough to where we can bring young guys in and they can play.

Q: Are you letting William Gholston read his press clippings?
A: You guys are bad. I don?t read them, so I don?t know if he is or not. I think he is on Facebook and Twitter too much to read anything. I hope he?s not reading them or he could end up getting beat out by somebody. But he?s a pretty grounded kid and he loves the game. I think either way, he?s going to come out and play.

Q: How special can he be? Could he be one of the best ends in the nation? Do you think that?s possible?
A: I really do. I don?t think he?s gotten near to his potential. I think he did in the bowl game, and we have had this talk. He?s a game-day player. He has a love for the game and plays with a lot of passion. He?s a super kid. But he?s not a great practice player. And all the great players, their work habits in practice, we like what they are on game day, too. I have told him that the last couple of years and will continue to harp on that. You have to have those work habits of the great players. If he does, his potential is unlimited. He had great bowl practices leading up to that bowl game vs. Georgia. Before we left for the bowl, I told him he had some great practices. And he told me that was how he was going to practice from here on out. If he?s reading his press clippings, I also hope he?s remembering where he was in the bowl game.

There are some times he?ll go out to practice and I?ll go: ?What the hell was that?? If a high school coach walked in, he?d wonder who that scrub was. That?s being honest with you. Playing with fundamentals is what he has to do better. He is naturally strong. If he puts his hands on you, you?ll fall over. If he puts the fundamentals and techniques with that, whoa. He has the ability to push anyone backward. He has natural strength but doesn?t always play with fundamentals.

Q: Will cornerback Johnny Adams be the leader in the secondary?
A: I don?t know if he?ll be a leader, but he?s gonna be a great football player. We have a couple of guys who are more vocal leaders and better team leaders. But Johnny is going to be a great player for us. I recruited him, he?s a great kid. He?s a quiet kid who goes about doing his business. That?s all you can ask as a coach.

Q: How good is safety Isaiah Lewis?
A: He?s gonna be real special. You have Trenton Robinson with the 49ers who was the safety last year. And Isaiah?s lid is a lot higher than Trenton?s. He?s gonna be a phenominal player. He will knock the heck out of you. He?s tough. He played injured most of last year. The trainers often didn?t think he should go, but he always said he was fine. You never hear a peep out of him. He?s not a prima donna. He?s a tough son of a gun and a very good player. He?ll be playing at the next level without a doubt if he continues to do what he?s doing. He had as good a year on our defense as anyone did last year. Except for one game last year, you would say he played better than Trenton Robinson.

Q: Your defenses are known for being tough and nasty. How do you foster that attitude?
A: The game is aggressive. It?s my mentality and that rubs off on our players. That?s how we wanna play ball. We go to practice every day wanting to win. I don?t want to lose a drill or a period in practice. It takes a nasty attitude to play this game. It really does. To be good, you have to have that attitude. There?s an intimidation factor we always talk about. We are on the kids to be their best every day. That?s the way we coach and operate.