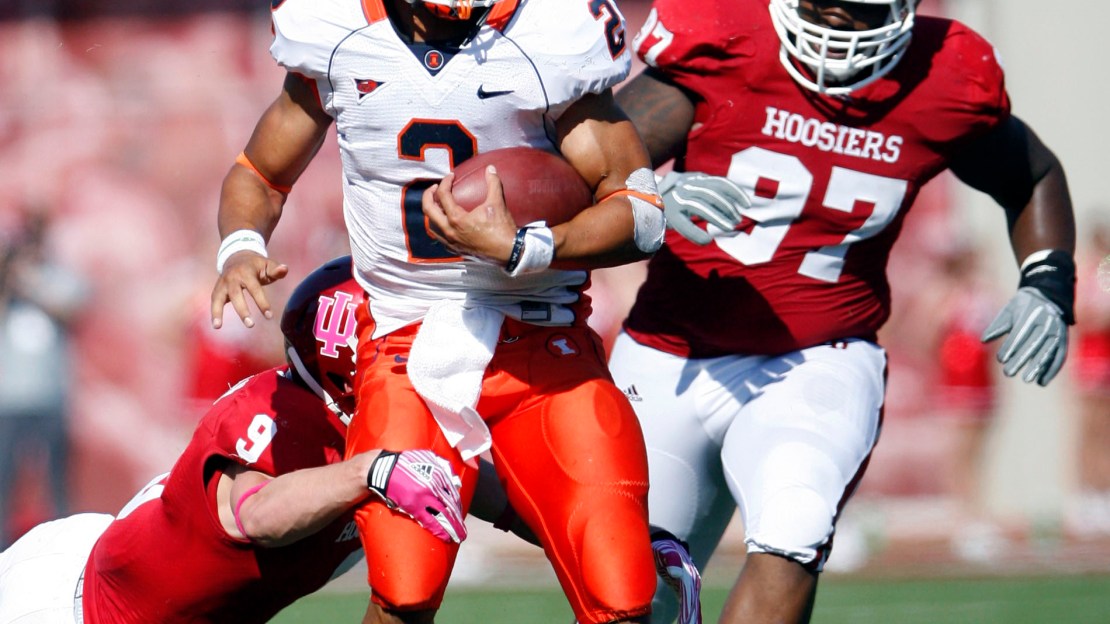 Mallory?s father, Bill, led the program from 1984-96 and left as the winningest coach in Hoosier history en route to taking the school to six of its nine all-time bowls. And during that run–from 1986-1993, specifically-Indiana often had one of the better defenses in the Big Ten.

But last season, the Hoosier defense struggled for a program that played 32 redshirt or true freshmen. During Kevin Wilson?s 1-11 debut season, the defense ranked last in the Big Ten (458.7 ypg). The Hoosiers were last vs. the run (243.7 ypg); eighth vs. the pass (215.0 ypg); last in points allowed (37.3 ppg). And Indiana also generated just 16 turnovers, the second fewest in the Big Ten (Minnesota had only nine).

Mallory, who played at Michigan from 1984-87 and has two brothers (Curt with Michigan and Mike with the Saints) who also coach, wants to change that for a program that has played in one bowl (2007 vs. Oklahoma State in the Insight Bowl) since taking on Virginia Tech in the Independence Bowl in 1993.

Because youth was served so heavily in 2011, Mallory?s defense struggled. Another year in the system, along with the arrival of five junior-college transfers, should help the fortunes of the unit, which is co-coordinated by Mike Ekeler.

I caught up with the 47-year-old Mallory, who also has coordinated defenses at New Mexico, LSU and Western Kentucky and been an assistant at Army, Maryland and Oklahoma State, to get his views on his 2012 defense.

Q: How big of an impact will the junior college players-linebackers Jacarri Alexander and David Cooper; end Justin Riverside; safeties Tregg Waters and Ryan Thompson–have?
A: The guys who will make the first immediate impact are the linebackers Jacarri and David. Those guys from Day One stepped in and gave us some leadership throughout the spring. So, we are excited to have those guys on board. In the secondary, we have Ryan Thompson and Tregg Waters. Both had productive springs. To be able to get those guys in January to go through winter conditioning and the spring and involved in our summer program is big. We needed help. And we think we were able to pick some guys up at mid-year who can step in and help us this year.

Q: Do you think the line could be the strong part of the defense?
A: I?d like to think so. We have some experience coming back and some older, more mature kids inside-(Larry) Black, (Adam) Replogle, (Nicholas) Sliger. Those three are really the only seniors on our defense, at least in starting positions. Those guys have played a lot of football for us. I think that?s where your defense starts. It starts up front. We feel good with those guys coming back, but we still need to get some of our young guys developed and to step up. But we feel good about the experience and maturity we have coming back up front.

Q: Any players who haven?t played much who could emerge as playmakers?
A: Hard to say. I don?t know if any will emerge because we played so many young guys last year. I think Kenny Mullen is a young man who played a lot in the nickel position for us last year as a true freshman and who had a very productive spring for us. He?s starting to fill out and mature more. Other than that, I don?t know if there will be any surprises. Maybe some incoming freshmen, but we can?t watch them work out over the summer. Hopefully, this next year we won?t have to play as many young kids. One advantage to playing so many young kids is you get that experience coming back. I know our spring was a lot more productive. We felt coming out of spring ball we were better than we were at any point during the fall. We feel good about the direction we are going.

Q: How is the defense different from this time last year?
A: We have a lot better feel for what our kids are able to do. And the kids are a lot more comfortable in the system and with terminology and technique. With that year of experience, I feel we are a lot further along. We were able to go through installation a bit quicker this spring than we were a year ago. I like to think the experience we have coming back will help us.

Q: What?s it like being a Mallory and being back at Indiana?
A: It?s nice to be back. I had an opportunity to work with my dad his last three years here. It?s really my third time. I came here as a graduate assistant after I graduated college. I was here in 1988 and came back with my dad for his last three years and then came back 14, 15 years later. It?s a great community, great university and I?m working for a great guy in Kevin Wilson. He?s doing a great job and it?s exciting to be back here and be involved in this program. I just think there is so much upside in this program. We are trying to get it out of this program and to be productive. I think there are so many positives. I have a father who was here as head coach for 13 years. The program and university have been such a big part of my family?s life. It?s just great to be back.

Q: You have seen Indiana have some good defenses — do you believe it can happen again?
A: Certainly it can. There was a stretch in the late-1980s and early 1990s when they probably were one of the better defenses in the Big Ten. We would like to get back to that.

Q: How often do you talk to your father?
A: In the fall, he?ll come by to some practices once or twice a week but stays in the background. I?ll see him a bit after practice and occasionally after a game. In the winter, he and mom head south for a couple months. I have seen him a little over the summer. He only lives about 10 minutes from here. It has been great for my kids to spend some time with their grandparents. We are able to see each other a lot more now than we had the past 14 years.