Dienhart: 'I thought I knew ya, JoePa' 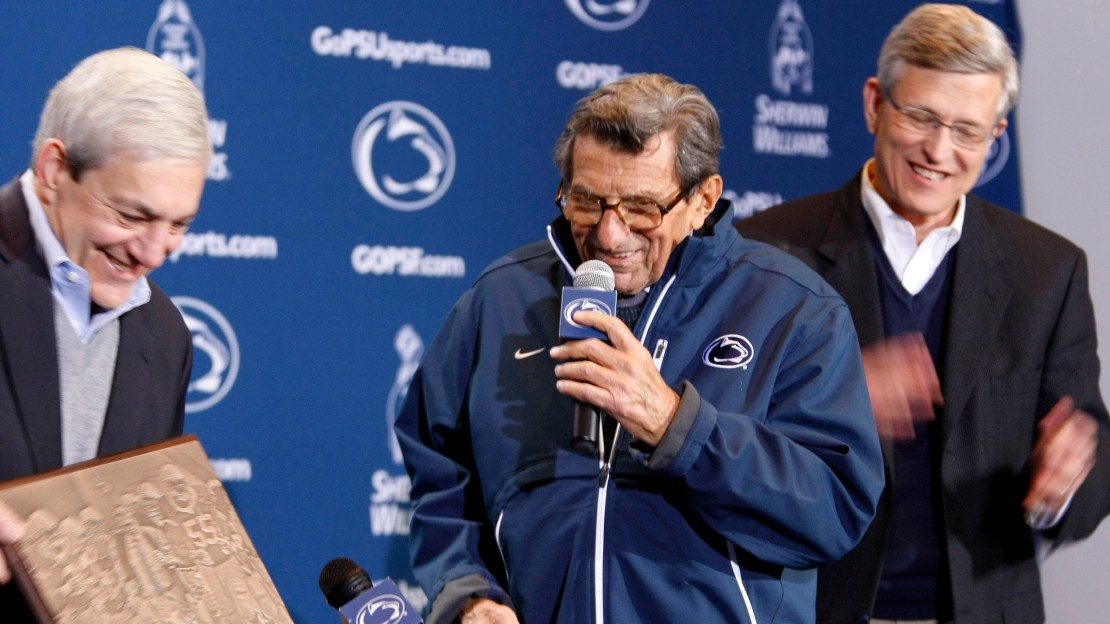 Joe Paterno died back in January. Today, his legacy perished. That makes me sad. And it should make you sad, too. Less than a year ago, Paterno was an American icon. He was one brick away from finishing a castle of coaching greatness as he zeroed in on the all-time win record for Division I coaching.

Oh, the beloved JoePa got career win No. 409 vs. Illinois in October. But it cost him his good name.

Soon after, it all came crashing down for the bespectacled Paterno, an elfish father figure who had become a larger-than-life figure. News of the Jerry Sandusky investigation hit State College with hurricane force in late October, changing a coach, college, community and nation forever in what is the worst scandal in the history of college sport.

Paterno?s career has been shattered into a million pieces with the harsh, sober words of the Freeh Report that was released today.

That record for all-time wins? It doesn?t seem so important now, does it?

Because Paterno didn?t do the right thing when it came to protecting children against an evil man. He along with three other school figures opted to cover up what they knew about the monster that was Sandusky.

But, that?s the truth.

You heard the words today. They were ugly.

"Our most saddening and sobering finding is the total disregard for the safety and welfare of Sandusky's child victims by the most senior leaders at Penn State," said Louis Freeh, the former director of the FBI who was hired by university trustees to conduct what was an eight-month investigation. "The most powerful men at Penn State failed to take any steps for 14 years to protect the children who Sandusky victimized."

Those cold and hard revelations in the Freeh report were horrific. They also sadly are the punctuation point on Paterno?s legacy that is now tarnished beyond reproach. All of those good things he did over four-plus decades as head coach of the Nittany Lions?

The generous donations to the school.

It all has been swallowed up by Paterno?s confounding inaction in what only can be classified as a selfish act of self-preservation. How did Paterno sleep at night over the past 10-plus years knowing what he knew?

I thought I knew ya, JoePa. I guess not.

I?m guilty of worshiping at the altar of Paterno like so many millions of others.

We all put people on pedestals they don?t deserve. We forget that we all are frail humans filled with faults. Still, we all want heroes to worship, people we can believe in. JoePa was one of those people for me. He stood for what was good. He ran a model program. But, most of all, he did the right thing.

Or so I thought.

Paterno was 5-foot-6 and couldn?t have weighed over 170 pounds, but he was bigger than life, an almost mythic figure of Paul Bunyan proportions who had strolled the sidelines of Beaver Stadium since 1966. He was the one who put this school located in a bucolic hamlet in the middle of the state on the map. And he did it by winning football games. Lots of football games. As the wins and accolades piled up, so did Paterno?s power.

Remember, about a decade ago, Paterno?s superiors arrived at his doorstep to deliver him his walking papers. Paterno flexed his muscles and shooed them away.

Can you imagine any other coach getting away with that? Of course not. But no other coach in the nation had as much power as Paterno. And that was the root of the problem.

And he knew he could do what he wanted.

Had Paterno wanted to make something happen in his city, his campus, his state, he could have picked up the phone and used his power to change it.

But instead of using his considerable power to stop Sandusky, he used it to help orchestrate a cover up.

Part of America?s innocence died today with the finality of this sobering report. Myriad lawsuits will follow. Maybe even an NCAA investigation. And a stain of shame that so many educated and powerful men brought to a proud university won?t go away for a long time-if ever.

So, it turns out we didn?t really know Paterno at all. And that?s scary for me. If Paterno wasn?t who I thought he was, then who else in my life isn?t what I think they are? I guess that?s what scares me. Who can I believe in? What can I believe in?

Today was a horrible day for college football.

It was a horrible day for Penn State.

It was a horrible day for Joe Paterno's legacy.

But let?s all say a prayer for Sandusky?s victims. They are the ones who have lost the most.